The Uncharted 4 E3 Demo, showed off a frantic set-piece that became bigger and bigger, and left the audience with jaws open on the floor. Luckily for those who can’t take that much action – not all set-pieces in Naughty Dog’s last Uncharted chapter, will be as big and frantic as that particular scene. 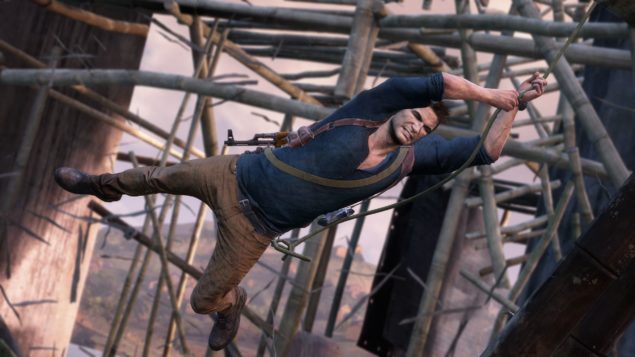 During last E3, Naughty Dog showed off an epic Uncharted 4 set-piece that might well be, one of the most intense action scenes in videogame history. Following the demo, the audience was gasping for air, and the game received several E3 Game Critics Rewards, including one for best action/adventure game.

Over the years, the Uncharted series have evolved, and it would seem that developer Naughty Dog has become more and more proficient in delivering unique set-pieces for their games. In the OPM UK interview, Druckmann talks about the evolution of their set-pieces in the Uncharted games, but also mentions the more ‘smaller’ pieces from ‘The Last of Us’.

“I guess our approach in the past has been to go bigger”, says the creative director. “You saw that evolution from Uncharted 2 to Uncharted 3, but with this one we felt like if we went any bigger, it would become comical; we could become a parody of ourselves. So it became really about how do we make them unique? How do we make them more playable?”

“What we did with The Last of Us was we constantly went small, quote-unquote, with the set-pieces. The became these very intimate sections. So you had Joel when he’s injured and he’s stumbling; that’s still a set-piece”.

According Druckmann, a particular set-piece from The Last of Us ‘Left Behind’ DLC, took as much work as the collapsing building set-piece from Uncharted 2. “I keep telling this story and people don’t believe me, but the photobooth in Left Behind, and the pictures that Ellie and Riley take – that took as much work as the collapsing building in Uncharted 2 as far as man-hours and recourses. It’s this really small moment, if you were to look at it and compare it to a film, but for us it’s like: we have so many recourses, so how do we best allocate them”.

The creative director reassures Uncharted fans that the upcoming Uncharted 4 will have big set-pieces, but will also feature more intimate moments.

“Yes, we’re going to have big-spectacle set-pieces, but the thing that The Last of Us and Left Behind gave us, is the confidence that to create these small intimate moments where there isn’t a threat of death, but it’s another way to get to know the characters through interactivity”. Those are really, for us, just as exciting as what you saw at E3; the big spectacles. I’m excited to see how fans react to that new balance of spectacle versus intimate [moments]”, Druckmann added.