ULV Ivy Bridge i5 i7’s Will Be Dual Core CPUs

The upcoming Intel launch will feature mobile a few quad core mobile i5’s and i7’s next week that can deal with up to 8 threads, but yet soon enough in May, their ultra low voltage line will also be available but more interesting to note is they will be dual cores. 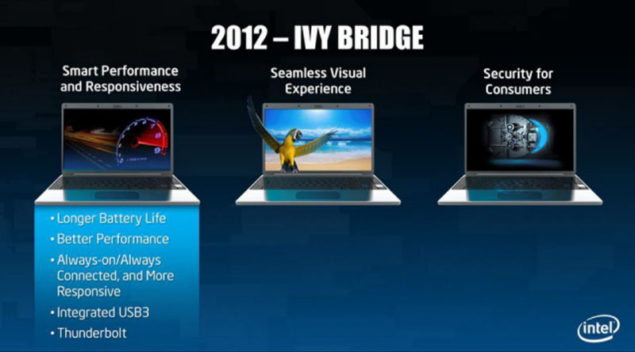 This seems interesting as the new Core i5 and i7 monikers will be used for dual cores. With that said, the fastest Core i7 would be a 3520M dual core with 4 threads running at a clock speed of 2.9 GHz. A single core will boost to 3.6 while running both cores to up to 3.4 GHz.

Graphics wise, they will come with Intel HD 4000 graphics with the core clock at 650 MHz and boost set to 1250 MHz. It comes with a 4MB onboard cache and memory support for 1600 MHz DDR3. The TDP is set at 35W which is indeed quite good performance wise but also since being as for an ULV chip is quite a bit high perhaps that leads to a short battery life span.

Its smaller brother is the Core i5 3360M, that is again another dual core with threads clocked at 2.8 GHz. The single and dual core goes up to 3.5 and 3.3 GHz respectively as to differentiate itself from the i7. The iGPU clock is set at a maximum of 1200 MHz and comes with 3MB cache. TDP however, is the same being rated at 35W and a cache of 3MB.

And also, last but not least the cheapest from the trio is the Core i5 3320M which is a dual core having four threads support and clocked at 2.6 GHz with the boost at 3.3 and 3.1 GHz for single/dual cores. Memory support also for DDR3 1600 MHz and 35W TDP, cache and graphics it maintains the same as the 3360M.