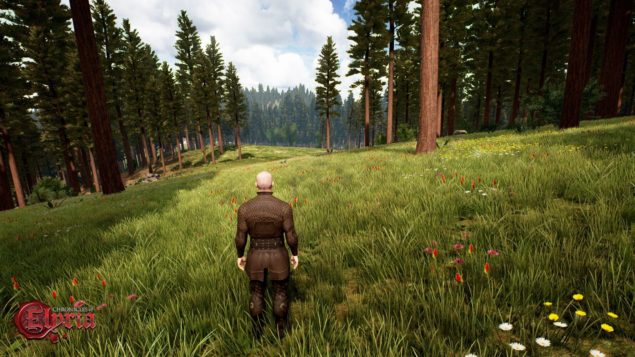 Those of you who have been longing for a new kind of MMORPG could be interested in Chronicles of Elyria, an exceedingly ambitious project by Soulbound Studios.

Funded by industry veterans Jeromy Walsh (former Lead Tools Programmer at Pandemic for Mercenaries and Star Wars Battlefront) and Eddie Smith (Lead Concept Artist at Bungie for Halo 2 and Halo 3; most recently he worked on Ryse: Son of Rome), the indie company based in Bellevue, Washington is now asking for the community's help to fund their dream game via Kickstarter.

There are many innovative features among the highlights of Chronicles of Elyria. The game, powered by Unreal Engine 4, is targeting a PC release first with console planned later; the action combat is being designed with the gamepad in mind, and you can take a look at it in the video below.

The most dynamic and immersive MMO to date, Chronicles of Elyria is the first MMORPG where your character ages and dies, encouraging you to think beyond your character to their role in a larger story.

Fearless in its design, it embraces a character's ability to impact other characters. A closed economy, finite resources, non-repeatable quests, and a fully destructible environment means the world is experienced differently for every character. Each time you log in there is something for you to participate in. Local, regional, and national conflicts are continuously unfolding, giving birth to repeated opportunities for you to change the course of history.

Enter the world as a member of a player-run family, then work your way up from a humble adventurer to a landed vassal, develop your dynasty, and work your way to King. Not interested in running a kingdom? The fully skill-based system and lack of classes means you're rewarded with the ability to create the exact character you want to.

Will you follow a path of virtue... or something darker?

• Aging, Dying, & Souls | An epic 10-year story line invites you to experience your character over multiple lifetimes. With each life you will develop your character and make your mark in the Chronicles. When your character eventually dies, their soul will be reincarnated stronger than before and their spirit and destiny will live on in another character of your making.

Characters age in-game over the course of 10-14 real-world months. During that time your character will grow old and eventually die, leaving their mark on history. But while alive you must choose your actions carefully, as each in-game death reduces your overall lifespan (by approximately 2 days) and brings your character that much closer to permadeath. However, if you're an influential player (the king perhaps), each in-game death is more impactful, leading to permadeath in just 4 or 5 times.
• Player Skill Matters | It's no longer about getting to level cap and pursuing the best gear. In CoE a player's skill - their timing, speed, and strategy - makes a difference. The combat system requires you to dodge, parry, and manage your stamina - not just spam buttons. Crafting also requires player skill, with mini-games designed to make crafting more than just clicking a button.

• Offline Player Characters | To maintain realism, your character remains in-game from the moment of creation until permadeath because you wouldn't want to be interacting with a merchant only to have them sign out and disappear from the world. We've solved this with AI scripts to support your character while offline. This allows you to train skills, run your shop, and defend yourself while you're AFK.
• Non-Repeatable Quests | Tired of killing 20 bunnies destroying a farmer's crops, only to see 50 other characters complete the same quest? We're doing away with NPC quest hubs by enabling other players to give out tasks. That same OPC merchant may run out of reagents, leading them to ask you to bring 10 elixirs back from a far off city, utilizing the contract system to ensure delivery.
• No World or Mini-Map | Map makers and cartographers have a place in CoE, helping players navigate their world. But watch out, because treasure maps can be faked and locations may be renamed, leading NPCs to refer to a town by the most used name.
• Game-Enforced Player Contracts | Implicit and explicit contracts enable you to develop unique, never-before-seen meta content. Signing in-game contracts between players creates a binding agreement so you can safely operate your business. Sign trade contracts to create a shipping business. Employ other players to procure hard-to-find resources. Sell your services as an expert assassin and be confident you’ll receive payment. The possibilities are endless and only limited by your creativity!

•MMORPG Meets Survival Game | With limited inventory, hunger and thirst, drowning and fatigue, and dangerous landscapes containing both sweltering heat and frigid cold, a character must be truly heroic to become a hero. The riches are real and adventurers can become the wealthiest and most powerful in the world - if they can survive the harsh environments.
• Character Customization | Your character is created as a part of a family, and thus is bound by the laws of genetics for that family. Joining a group of squat, redheaded bakers? You likely won’t start out as a lithe, blond haired adventurer.
However, in CoE characters change dramatically even after character creation. Your character ages from 15 to ~100, and will look their age. Scars develop and fade over time. Hair grows while in the wilderness and may be re-styled while in town.

Your character’s body adjusts to your play style, so you know when approaching a twig of a player who claims to be a blacksmith, that you probably shouldn’t trust his word. This also means you can grow out of your armor, so watch what you eat!

• Freedom of Movement | Chronicles of Elyria's combat mechanics do not rely on auto-attacks or hot-bar buttons. Instead, CoE uses Left & Right mouse buttons to chain combat techniques together into combos.

These combos are configurable in the UI, allowing players to develop their own personal combat style using different techniques for each weapon they use.

• Fully Skill-based Character Development | With dozens of skills across multiple categories including fighting, gathering, crafting, survival, bardic, and deviant, you can develop the character you’ve always wanted to. With a skill system that rewards failure instead of success, and mechanics requiring player skill in addition to character skill, you must take on ever-increasing challenges if you want to be the best.
• Family, Land, & Housing System | Be a part of a player ran family, inheriting titles, riches, and character traits from your parents and ancestors.
Use your lands to grow crops and farm, or lease land to others to build player-ran towns. Set laws, acquire resources, and grow your domain from hamlet to kingdom. The fully destructible and buildable world means you can truly create your own village from the ground up. It also means you'll protect your loot, leading to player-created dungeons.