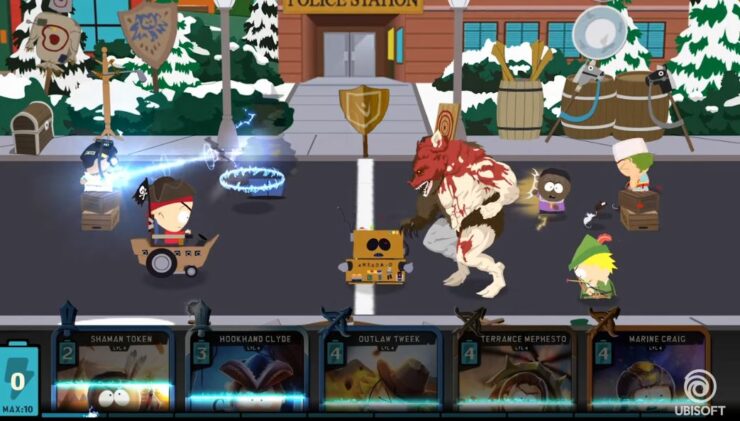 Ubisoft is working on a South Park game called “South Park: The Fractured But Whole,” and now at the E3 2017 press conference, the company announced a second game entitled South Park: Phone Destroyer. As suggested by the title, the game is a mobile oriented free-to-play platform. The game will be available on the App Store and Google Play later this year. So let's dive in to see what more does the game has to offer.

South Park: Phone Destroyer Will Be Available For iOS And Android

Feigning interest on the brief trailer showcased during Ubisoft's E3 press conference, there wasn't much provided for us to judge what sort of a game this might this be. Nonetheless, the company has bridged several gaps detailing the game "combines real-time combat with traditional trading card collecting."

For what information we currently have, the game will allow you to team up and fight with cowboys, bards, cops, cyborgs and more as you play as the New Kid from The Stick of Truth. As the trailer opens and shows one of the TV show's main characters, Eric Cartman, announcing that they're playing as Cowboys and Indians.

As it seems, the game does seem to share some of the characteristics used in other South Park games from Ubisoft. For instance, South Park: Phone Destroyer shares the same turn-based combat as other games as well as follows the same narrative of the kids from South Park, Colo, playing games all over town and dressed up. For more details, check out the video embedded below.

With that said, do expect the same sense of humor in the South Park: Phone Destroyer which the franchise is popular for. There are popular battles between bards to choirboys to clerics and much more.

The game is being developed by the Ubisoft studio RedLynx and will be a free-to-play title. You will have to upgrade your team through acquiring new cards which can further be used to compete against players in multiplayer.

As we have mentioned earlier, South Park: Phone Destroyer is not  the only game highlighted at the company's E3 2017 press conference. South Park: The Fractured But Whole also received a new trailer and a release date for October 17. As for the Phone Destroyer, the game will be released by the end of 2017.

This is it for now, folks. Do stay tuned for our extensive E3 2017 coverage and as for now, were you anxiously waiting for South Park title to hit the mobile category? Share your views in the comments.