Over the last few months we've covered the ongoing battle between Ubisoft (EPA:UBI) and potential buyers Vivendi (EPA:VIV). A couple of months ago we've looked at a target-beating €139 million in sales and five days ago we covered the Ubisoft convertible bond issue/share buyback. Today was the day that both the Guillemot brothers and Vivendi have been waiting for. The results are rather surprising.

Overall expectations were that Vivendi would request representation on the board, as they have stated before. Owning 22.8% of shares in the company, shadowing the 12.5% the Guillemot family has. However, initial reports seem to indicate that Vivendi didn’t request a position on the board and that the Guillemot brothers have been reappointed. Of course, things may not be as they initially seem.

In advance of any possibly contentious votes, it's normal for both sides to court large voting block shareholders and it's been widely reported that this has been going on with the outcome initially assessed to be a pretty close call. Ultimately, the fact that Vivendi didn't even propose representation at the meeting is indicative of a few possibilities:

Ubisoft had good results last quarter, beating expectations and is heading into the all important holiday season. It's quite possible major shareholders would rather not have any potential disruption to detract from what needs to be an excellent couple of quarters for the firm. That much said, upcoming results are likely to be watched closer than normal. If Ubi doesn't deliver, expect a different result in the future.

As indicated in our last post, the three major investors behind Vivendi and the brothers are Fidelity, Blackrock and NBIM. All three are of course professional investment outfits rightfully concerned with what brings them the most return, something which Ubisoft has done somewhat over the last couple of years, although longer term results are of course significantly mixed, leaving major room for improvement.

Ubisoft was also recently able to fire back against Vivendi’s move into the mobile gaming sector with the announcement two days ago (27th September) that they have acquired mobile publisher Ketchapp. This acquisition pushed the company into the spot of fourth largest mobile publisher, measured by the number of downloads. 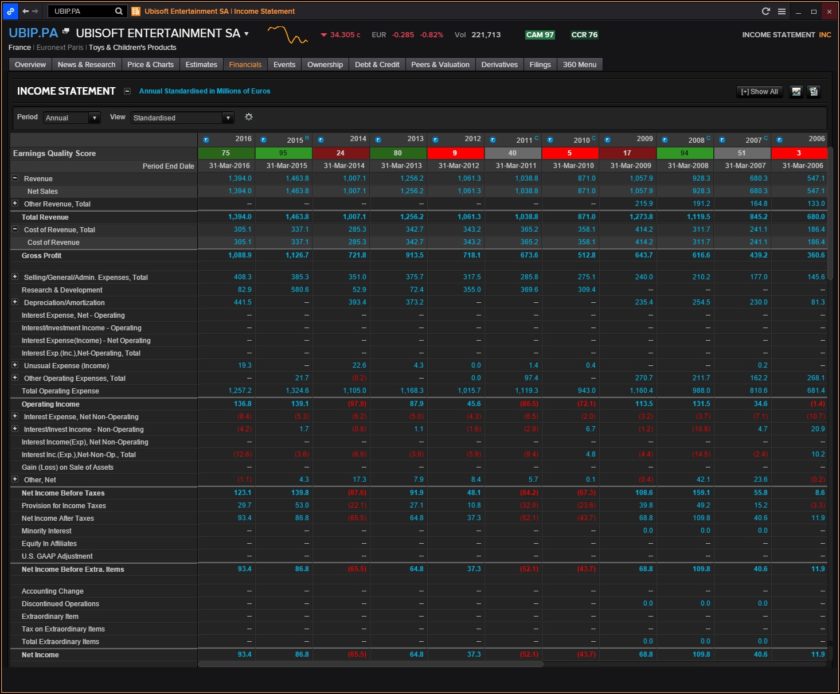 Won’t somebody think of the games?

This is of course the crux of the story for me, as a gamer. Unsurprisingly, it’s also one of the major defensive points against a Vivendi takeover. The last time Vivendi were a player in the making of games was with them holding a majority stake in Activision Blizzard, something that has been lowered from a high of 52% to just 6% now. In June of this year Vivendi initiated and succeeded with a hostile takeover of mobile gaming company Gameloft.

The concern is Vivendi’s statement following the AGM, particularly the last point, which can be found on Reuters:

* Vivendi says took part in Ubisoft's General Shareholders Meeting, where it is the largest shareholder, holding 22.8 percent of the share capital.

* Vivendi says it holds the shares in registered form with a view towards long-term share ownership and enjoying a double voting starting from 2017.

* Vivendi says it would be good corporate governance to be represented on the Ubisoft's company board of directors considering its level of equity interest.

* The company said it abstained from the vote on the resolutions on Thursday, as result, resolutions 22, 23, 24 and 25 presented by the company's board failed to pass.

* Having taken full control of Gameloft, Vivendi says will pursue its strategy in video games which complements contents it develops in the fields of music, television and other businesses.

This indicates, to me, that Vivendi are seeming more to bring a games company in line and have them link into the music and television fields that they already own. Seeking complementary products, a video game tie-in to the films they produce. Studio Canal producing films tie-ins of existing Ubisoft IP’s. Tracks taken from the selection Universal Music Group has in their catalogue.

Financially it’s a sound move for Vivendi and allows for a lot of cross-promotion. It would allow them to link a number of aspects together. From my perspective, it’s a slippery slope that could lead to the downfall of what is currently the industry's third biggest publisher. One that may not be innovating, but is still putting out large games and a number of them are excellent.

They’ve won the battle, but not the war

There’s little doubt that Vivendi will still push for a seat on the board. Although this has been a setback, it is likely a minor one. Vivendi will probably have more voting power next year and even without that, they still hold the largest number of shares in the company. In this sense, the company is in a very good position. If Ubisoft continues to deny them representation, they are likely successful in that denial only as long as they keep existing shareholders happy, which means good earnings. If they are making good money, Vivendi benefits as a shareholder, if they slip, Vivendi can push for greater control.

What is also a possibility, though less likely, is that Vivendi will also follow the Guillemot brothers path and continue to buy shares, though stop below the 30% threshold that triggers a mandatory takeover bid under French law.