Ahhh Ubi (EPA:UBI). How we love you. Or not, depending on what we’re discussing. It’s no secret that the company isn’t the most loved by gamers around the world, having suffered from buggy launches (yes Assassin’s Creed Unity, I’m looking at you!) and graphical downgrade controversies over the years.

Well, it appears we love Ubisoft again, at least we did this quarter as it seems like you just can’t keep a good developer/publisher down since today Ubisoft reported earnings beating its initial target for the quarter of €125m.

It has been an extraordinary quarter for Ubisoft, beating expectations to come in at €139.1m for the quarter. Up 44% vs. sales from the same quarter last year, even accounting for exchange rate fluctuations. Somewhat surprising given they didn’t have any huge releases in the last quarter (The Division was before released before it).

Given that Ubisoft is still standing by its full year expectations of €1.7bn, it’s fair to say that this represents a very small part of the overall pie and although a solid start to the year, they need to make sure they deliver (and deliver well) on the big titles slated to launch later on this year in Watch Dogs 2, Steep and South Park (due before the end of the calendar year), while For Honour and Ghost Recon drop before the end of the financial year in February and March respectively.

Even so, the market seems happy with their trajectory and Ubisoft shares closed the day up 4.53%.

Keep in mind though, that while Ubisoft (EPA:UBI) has had a decent quarter, the picture over the medium to long term has been a bit of a mixed bag from a gamer perspective. This has reflected over time in the quality of their earnings. The videogame business is a very cyclical one, hence we see such relatively paltry amounts being reported now with big releases coming around later in the year. But add onto this the slightly antagonistic view some gamers have these days of the company releasing “yet another Ubisoft game” and it seems clear that the open world strategy, which has helped them to a point is starting to feel a little tired.

This has been reflected over the years in the quality of their earnings and some wonder whether the company needs some fresh impetus with which to tackle the likes of Electronic Arts (NASDAQ:EA) and Activision Blizzard (NASDAQ: ATI).

This of course is all set against the backdrop of Vivendi (EPA:VIV). For those who are unaware, Vivendi is the French media giant who also at one time owned Blizzard and recently acquired a controlling stake in Gameloft last month. Gameloft being founded and run by Michel Guillemot (one of the Ubisoft Guillemot founding brothers) until last month when he stepped down.

Both Michel and Yves (current CEO of Ubisoft) have gone on the record to state that they view Vivendi’s interest in their companies as hostile, particularly given that it was announced yesterday that Vivendi has built up a 22.8% stake in Ubisoft and now controls 20.2% of its voting rights, having increased its stake by 2.7% last month alone.

Although Vivendi has stated it doesn’t intend to acquire Ubisoft (thereby barring it from acting to take it over in the next 6 months), under French law if the firm acquires more than 30%, it will be obliged to make an offer to buy the company outright.

Although Gameloft probably represents a better return on investment for Vivendi, particularly given its focus on mobile which we know, (despite wishing it were not so) is often cited as the future of gaming (just look at Nintendo’s share price surge since Pokemon Go launched), Ubisoft is clearly the jewel in the crown of the French gaming industry and it would appear that Vivendi has its eye on the prize. 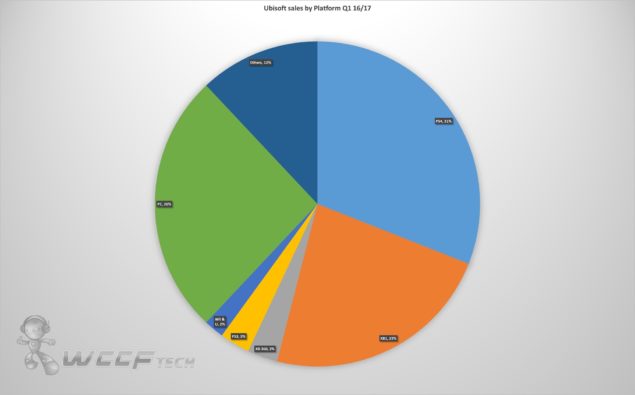 Mobile is definitely not the strength...

Perhaps more importantly, it may allow for some much needed reinvigoration of the Ubisoft lineup and then just maybe, better earnings. There is still a long way to go in this battle. We’ll be following it closely, although what is best for earnings is not necessarily in the best interest of core gamers...