Uber, after its successful testing of Smart Routes and other vehicle sharing services - UberPool, Uber X etc. - is now launching its all new self-driving car project. This project is planned to be initiated in the University of Arizona.

Uber Is Focusing More On Optics System And Mapping Challenges

This new project by Uber is primarily initiated to ensure that self-driving cars get more spotlight than they actually deserve. This is because there are still many challenges regarding this tech which are needed to be addressed timely, including optics and mapping shortcomings while producing a fully autonomous car.

According to Uber, while working on this new technology:

"We’ll work with some of the world’s leading experts in lens design at the University to improve the imagery we capture and use to build out mapping and safety features.."

Since this was an official statement by Uber, this also confirms the news that University of Arizona has been given this research project as partnership with Uber. This project is here only a few months after Uber’s Pittsburgh center’s hiring push. The was a genius move to gather all robotics lab experts and put them under their own wing, thus weakening all other rival projects going on. Uber is also expected to donate $25000 to the University's College of Optical Sciences. 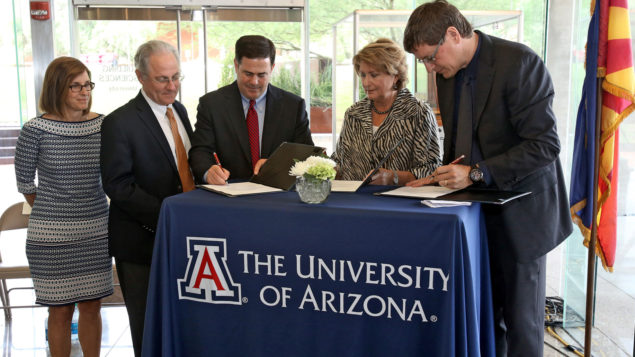 “I think the College of Optical Sciences is one of the leading in the world, and we are looking for improving the technologies that mapping and driverless vehicles are dependent on, and this is a great place to start,” McClendon said.

As per the statements issued by the Governor of Arizona, the partnership between Uber and the university basically focuses on the optic systems. This will ensure more reliable working of the optics system required for correct working of mapping and safety. This might also allow Uber’s testing vehicles to stay permanently in Arizona. Details regarding this partnership are still under process, but this project still seems to have enough potential to ensure the challenges regarding autonomous cars being addressed. And Uber knows that autonomous cars are the way of the future and that is why they are tapping into this industry as soon as possible.