Uber and Lyft Down as AB5 Becomes Law in California 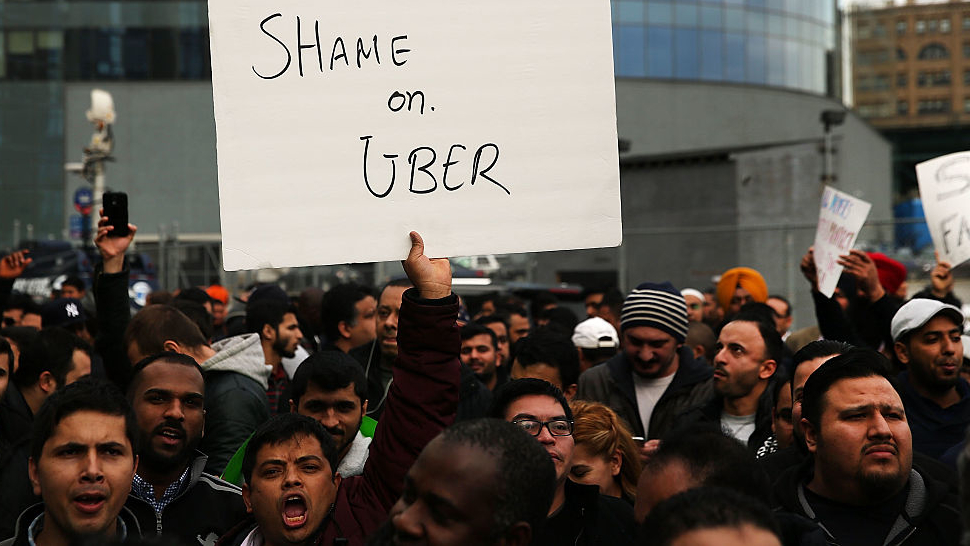 Uber (NYSE:UBER) and Lyft (NASDAQ:LYFT) are trading down today as California passes AB5 which is considered a direct attack on the two ride-hailing companies. You can read some of our previous coverage here. In response to this legislation, Uber has made the bold move to state that it does not consider the passage of this bill as material to its business because they are primarily a “digital marketplace” and that drivers are not a regular part of its business. The two companies are likely on a similar page here as Uber is contending that it is not technically a ride-hailing company but rather, it is providing a connection service to drivers and passengers that is allowing them to connect together using the services that the companies are providing. Drivers and passengers are free to decline rides if they want and both can accept rides they agree to.  In this way, the drivers are also customers of the matchmaking service as well.

On the other hand, opponents claim the argument being put forth is preposterous. “Uber and other gig economy companies are thumbing their nose at the law and refusing to do it,” Shannon Liss-Riordan, a prominent gig workers’ rights lawyer, said. “So we are asking the court to immediately require these companies to reclassify their drivers.” She already is at the head of a class-action lawsuit claiming that that the company had failed to pay its California drivers minimum wage. She has also stated that the idea Uber wasn’t in the driving business “strains credulity.”

According to Rebecca Givan, a Rutgers University labor relations professor, the two firms are making, “…the claim – which is preposterous – that they’re more like Craigslist…” However, she goes on to argue, “…they set the prices, what car you can use, all kinds of things. They’re not more like Craigslist; they’re an employer.”

The State of California has also estimated that it is losing as much as $7 billion dollars in revenue to gig employees and other contract workers each year. The State of California released the following, “The misclassification of workers as independent contractors creates an unfair playing field for responsible employers who honor their lawful obligations to their employees. The misclassification of workers results in a loss of payroll tax revenue to the State, estimated at $7 billion per year, and increased reliance on the public safety net by workers who are denied access to work-based protections.”

Uber released the following statement in response, “What AB5 does do is fairly straightforward: it inserts into the California labor code a new legal test that must be used when determining whether a worker is classified as an independent contractor or an employee. And that legal test is already the law of the state since the California Supreme Court handed down its decision in Dynamex over a year ago. That legal test, called the “ABC test,” certainly sets a higher bar for companies to demonstrate that independent workers are indeed independent. Under that three-part test, arguably the highest bar is that a company must prove that contractors are doing work “outside the usual course” of its business.

But just because the test is hard does not mean we will not be able to pass it. In fact, several previous rulings have found that drivers’ work is outside the usual course of Uber’s business, which is serving as a technology platform for several different types of digital marketplaces. Notably, AB5 actually limits the Supreme Court ruling in Dynamex because, due to eleventh-hour amendments to the bill, many industries are now exempt from the new ABC test that AB5 will codify into state law.”

What Should These Companies Do?

Now, I am neither a professor, nor a lawyer, but I don’t think just declaring that someone is an employee makes it so.  However, Rebecca makes an important point that there are a variety of rules that the two companies have put in place to ensure that there is a minimum standard of quality on the part of the drivers using its service as part of its terms and conditions. But does having certain terms and conditions such as requiring a certain age of vehicle and accepting a particular rate make the drivers employees?

Based on the arguments from labor relations leaders and the lawyers bringing forth the lawsuits I would speculate that Uber and Lyft could make some changes that would limit the impact of the law by granting additional autonomy to the drivers signing up for the service. One change might be simply a matter of granting drivers the ability to set their own rates while Uber and Lyft take a flat fee or a percentage of the rate as compensation for match-making. It could go further and allow passengers the ability to offer a rate to receive service and generate the ability of both parties to provide offers and counteroffers.  That could theoretically solve one of the problems as detailed by parties declaring the drivers are employees. The companies could also begin to take a more hands-off approach and instead develop additional rating tools to ensure customer and driver satisfaction.

In the meantime, while the argument from Uber may not end up winning in court over the long run the wheels of justice tend to turn very slowly which will likely give both of these companies an extended period of time to react and search for creative solutions around the enactment of this law and to also move in the direction of profits, since currently both companies are operating at a loss already.