Google has today announced that it will be integrating tweets from Twitter right into its search results on the desktop.

Back in May, Google announced that it's bringing Twitter integration to search results on mobile - iOS, Android and mobile Web. The sole purpose of that integration was simple, to give users a wider perspective of things when they search for something on Google. For example, if you search for 'NASA Twitter' on the Web, it will show you a neat card up top, showing you tweets from the official @NASA Twitter account. Same goes for hashtags as well, allowing you to follow a trend without having to steer yourself to the Twitter app or the website.

Today, Google has broken away from its shackles on mobile, and is bringing the very same integration to the desktop. But there are a few things users need to keep in mind. For instance, the feature is not available on the non-English Google website, so quite a bit of users will be left out from the newly realized feature. Don't worry though, as Google has promised that it's bringing Twitter to search results in other languages very, very soon, hence we're certain that good news will knock on our doors sooner rather than later.

Like we mentioned before, Twitter integration in search - on desktop - can be used to follow trends as well. Or, if you're interested, you can even use Google's voice engine to ask about what people are saying about some particular celebrity's birthday.

Google being a major player in online search, we had hoped that Twitter integration would be on our doors a long time back. But still, it's better late than never, right? 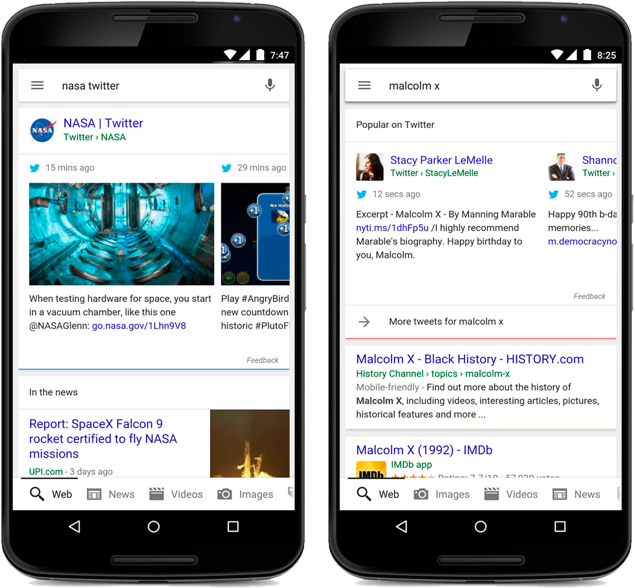 If you happen to take the new feature out for a spin, then be sure to let us know about it in the comments section below. And like we mentioned above, the feature works on the English version of the Google website and support for more languages is on its way soon.

If you haven't downloaded the Google app already, then we suggest that you give it a good spin right now, after all, it's absolutely free. You can download the iOS version from here, and Android from here.