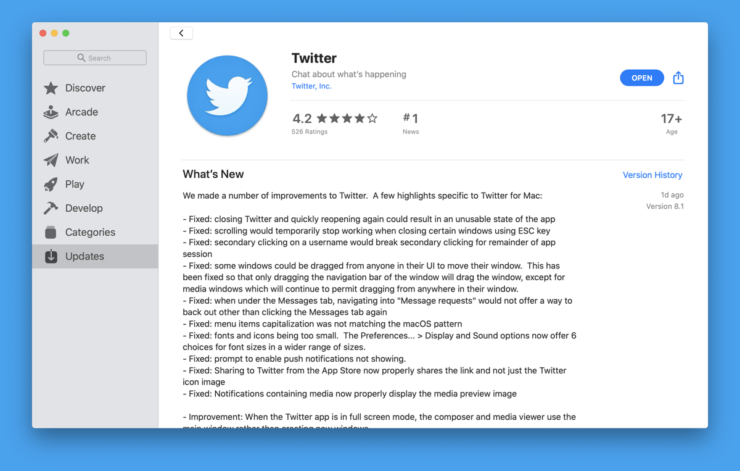 The Twitter for Mac app for macOS Catalina has received its first ever update since release and it's packed with fixes and improvements.

If you are a macOS Catalina user then the official Twitter for Mac app is the way to go if you want to catch up on your timeline. Recently ported to the Mac using Apple's Catalyst framework, the first iteration of the app was somewhat of a mess when it comes to reliability and stability. Right now, Twitter assures that many of the bugs and issues have been ironed out and we'll take that claim at face value.

The complete changelog of the update straight from the Mac App Store is as follows:

Fixed: closing Twitter and quickly reopening again could result in an unusable state of the app
Fixed: scrolling would temporarily stop working when closing certain windows using ESC key
Fixed: secondary clicking on a username would break secondary clicking for remainder of app session
Fixed: some windows could be dragged from anyone in their UI to move their window. This has been fixed so that only dragging the navigation bar of the window will drag the window, except for media windows which will continue to permit dragging from anywhere in their window.
Fixed: when under the Messages tab, navigating into “Message requests” would not offer a way to back out other than clicking the Messages tab again
Fixed: menu items capitalization was not matching the macOS pattern
Fixed: fonts and icons being too small. The Preferences… > Display and Sound options now offer 6 choices for font sizes in a wider range of sizes.
Fixed: prompt to enable push notifications not showing.
Fixed: Sharing to Twitter from the App Store now properly shares the link and not just the Twitter icon image
Fixed: Notifications containing media now properly display the media preview image
Improvement: When the Twitter app is in full screen mode, the composer and media viewer use the main window rather than creating new windows
Improvement: Added an “Accounts” menu for easier access to multiple account features
Improvement: Added timeline navigation key commands to the View menu
Improvement: Command+N now works globally
Improvement: Command+N will now always create a new Tweet composition. It used to sometimes start a reply, which can be accomplished with `R` when viewing a Tweet
Improvement: Can now use Drag and Drop to drag a video file from a finder window into a Tweet composition.
Improvement: Added support for pasting a video file, an animated GIF file, or multiple photo files copied from a Finder window into a Tweet composition. Can use Command+V, or secondary click and select “paste”
Improvement: Support trackpad and Magic Mouse back gestures
Improvement: Updated navigate back menu item to show Command+Left Arrow as keyboard shortcut. Command+[ still works, but Command+Left Arrow is easier for most international keyboards.

Honestly, there is a lot to digest here. But I'm going to go through some of the features which are noteworthy in this update.

First and foremost, the app is extremely stable if you tend to close and launch the app way too often. Secondly, when you kick the app into full-screen mode and open the tweet composer and media viewer, they now open up in the same space rather than an entirely new window.

This one's really cool and I'm sure everyone is going to appreciate this feature addition: you can now simply drag and drop a video from Finder straight into the tweet composer. But that's not all, you can even do the same for GIFs, multiple photos and more. Personally, I'm extremely happy with this feature and is something which should have been there since day one. But it's OK, slowly and steadily we'll get the ultimate Twitter experience on the Mac.

Rest is pretty much standard affair. You get a barrage of crash fixes, UI improvements and whatnot. For those with a Magic Mouse or Magic Trackpad, you'll be pleased to learn that you can now use the gesture to go back a window, which is nice.

Twitter for Mac is absolutely free and I will highly recommend downloading it if you are an avid Twitter user.