Trump Threatens to Escalate Tariffs on Chinese Imports to $100 Billion 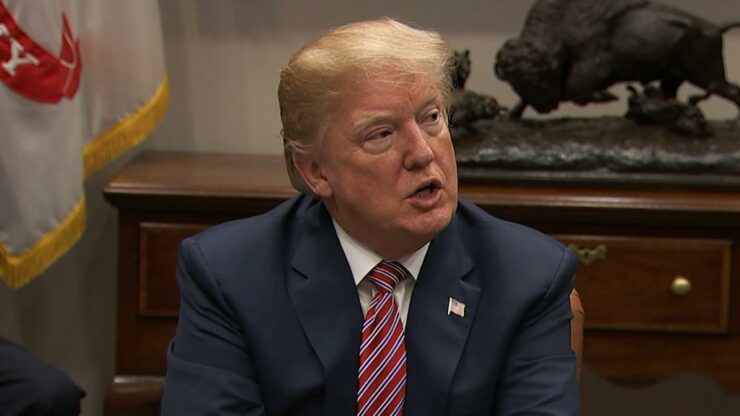 China’s Commerce Ministry announced it will “counterattack with great strength” if Trump goes through with his threat of tariffs on a further $100 billion worth of Chinese imports.

Gao Feng, on behalf of the Chinese government said today at a news conference: “If the U.S. side announces the list of products for $100 billion in tariffs, the Chinese side has fully prepared and will without hesitation counterattack with great strength.” He went on to say “under these circumstances, the two sides cannot possibly conduct any negotiations about this issue.”

The President has announced plans for another $100 billion in tariffs targeting goods imported from China yesterday. The announcement comes “in light of China’s unfair retaliation” earlier this week.

This morning U.S. President Donald Trump defended the ongoing trade dispute between the United States and China, saying it may cause some disruption for the economy in the near term but that it will all be worth it in the end. He made the comments this morning during a radio interview on 77 WABC Radio.

“I’m not saying there won’t be a little pain .... So we might lose a little of it [economic gains] but we’re going to have a much stronger country when we’re finished, and that’s what I’m all about.’’

Trump is basing this general attack on the trade deficit with China around unfairness as he and his advisors perceive it.

China, which is a great economic power, is considered a Developing Nation within the World Trade Organization. They therefore get tremendous perks and advantages, especially over the U.S. Does anybody think this is fair. We were badly represented. The WTO is unfair to U.S.

China does indeed have a track record of demanding access to intellectual property to open up its vast market to foreign companies. That may be in the form of a formal handover of technology or it may be indirect access. Products that are manufactured in Chinese factories can be copied and legally sold once small alterations or aesthetic changes are made. Where the U.S. will grant IP protection for an idea of something, the Chinese consider something different the moment the tiniest modification is made so there's very little true protection of IP.

The most effective way to address this isn't clear, however, we will find out soon enough if these ever-increasing threats of tariffs become real. If you haven't been following here is a brief history of the snowballing import duties each nation is announcing.

The U.S. announces tariffs on some light imports such as solar panels, most of which are sourced from China

The U.S. announces tariffs on steel and aluminum worth $3 billion USD. China is the world's largest exporter of steel and called this a "serious attack" on international trade. NAFTA trade partners Canada and Mexico were exempted.

China hits back with tariffs on U.S. imports worth around $3 billion. American products like fruits, nuts, wine, pork, and recycled aluminum were hit with up to a 25% tax.

The U.S. is swift in its retaliation and announces a planned $50-60 billion worth of tariffs on Chinese imports. The Trump administration cited the August 2017 investigation into Chinese intellectual property theft and this time tariffs were aimed at aerospace, industrial and commercial machinery, and medical equipment. We covered the original tariff announcement here.

China responds with announced tariffs on U.S. imports worth around the same $50 billion nominal value. American soybeans, aircraft, liquor, cars, chemicals, and others were hit with up to a 25% tax. Find our coverage here.

Trump announces via a prepared statement that he has instructed his officials to draft up an additional $100 billion in tariffs for Chinese goods.

China doesn't seem to be backing down. "We are prepared and have already formulated very detailed countermeasures," Gao Feng, a Commerce Ministry spokesman, stated to reporters at a press conference on Friday.

Markets have not reacted favorably to this newest development. The Dow (INDEXDJX:.DJI) is down over a percentage point as is the S&P 500 (INDEXCBOE:.INX).