Last month I was able to attend an event held by SEGA and play Total War: Warhammer 2. During the event we were told about the Skaven which unveiled yesterday as the fourth major race. While there I also got to spend a few hours playing as the Skaven, which you can read about here.

As well as this, I was also able to have a chat about the game with Andy Hall, Lead Writer, and Greg Alston, Lead Animator. We spoke about a number of things, from the Skaven to improvements in animation and an animator's dream to work with dinosaurs. In addition, I got told a little exclusive about what is a first ever for the Total War franchise.

Chris: The first thing I've noticed while playing is the writing of the Skaven. What immediately attracts me is the repetition and the character they show.

Chris: Exactly! So the Skaven are a much-wanted race. What went into the decision of putting them into this game rather than Total War: Warhammer 1?

Andy Hall: Well with Total War: Warhammer 1 we kind of knew four races that had to be in there based on the geography. We were in the old world so needed The Empire. The Dwarves were next door and of course the Vampires which are technically part of The Empire. That's three, and then there's the Orcs. So already our roster got pretty full.

I didn't think there was any harm in waiting. We knew Skaven would be popular because I think they're one of the few races that transcend Warhammer itself.

Chris: Yeah. They're so unique and have featured in so many other games as well.

Andy: Yes. They're really popular, we knew that keeping them back would be a boon.

Greg: Plus, the attention to detail. What we didn't want to do is rush it in and try to squeeze it into Warhammer 1. You gotta give the appropriate love to it. What we want to do with each race is put the attention to detail in there so it doesn't feel like a re-use, re-skin or whatever. Each race we're trying to put some bespoke animations in. So Skaven we wanted to have enough time to give the love and detail.

Chris: You've mentioned the animations. Before jumping onto the campaign I tried the battle and I don't know the creature...

Chris: That's him! I was watching him in battle with another creature, jumping over each other, fantastic. The animations of those have gone into great detail. I'm more curious if you've developed on the animations of regular units and heroes more?

Greg: Yeah, as a team we're trying to add personalities. When you talk about heroes and things we have put one or two bespoke animations so when they match up there is a bit more fantasy. The key thing we want to do is differentiate from the main infantry, so they've got something a bit more special. At the end of the day they're your lords, you got to have something there and you want to spot them in the battlefield doing something unique.

Andy: Sorry, standing on Greg's toes for a sec. I think for the animators it's kind of been a dream come true. Especially if you've got some animators who've been there a good five-ten years who probably thought they were going to do Romans for the rest of their lives. All of a sudden they're doing Dragons wrestling Tyrannosaurus Rex effectively!

Greg: All animators want to dinosaurs. So with lizard men, it's a dream come true. But not only dinosaurs you've got dinosaurs riding dinosaurs. 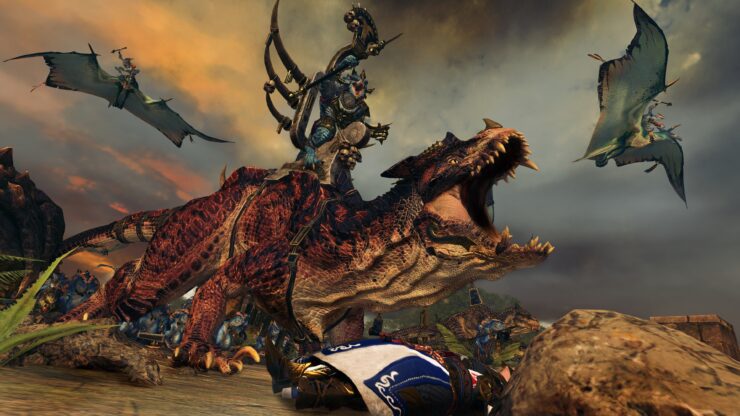 Chris: Dinosaurs riding dinosaurs with lasers. Like you say, you just can't get that everywhere.

Andy: It's only Warhammer that gives you that kind of freedom. A lot of people say there's probably more well-known fantasy IP. Lord of the Rings, even Game of Thrones. But only Warhammer gives you rat men and dinosaurs riding dinosaurs.

Chris: Too true. It's the variety that it offers. Moving onto the map of the game. You've moved west but it's been mentioned about the combined map. Do you know roughly when it may come?

Andy: Shortly after release. You're not going to be waiting months and months. It's the first patch.

Chris: The combined map will obviously link into the first game. What's it going to be like for those who only own Warhammer 2?

Andy: If you only own Warhammer 2 then not much will change to be fair. Obviously, Warhammer 1 will remain on sale so if you already own Warhammer 1 or want to purchase Warhammer 1 then it'll expand the game. I think it overarches a big point about Warhammer 2. This isn't an expansion, it is a proper sequel with brand new features and everything. You can buy it and you'll learn to play it, we've made sure we've put stuff into the tutorial.

Greg: Also the DLC, so such as the Wood Elves will still work with the new campaign as well.