More from the interview with Andy Hall & Greg Alston

Chris: You've obviously got the Skaven campaign mapped out. With all of the races, have you got other campaigns mapped out?

Andy: Absolutely. So, we've got the Eye of the Vortex which is the campaign the game comes with. For Total War it's quite a tight, narrative campaign. Each race will have their story told through movies. We've thrown in some surprises there. It's a narrative experience with the Total War gameplay, which is sandbox gameplay.

The challenge for the writing team is making sure players can still play with as much freedom as they like but can still hit that story. Here we've got to tell the story no matter how big their empire is or what legendary lord they have. Each race will get their own take on the vortex campaign and hopefully we can throw in a few twists that'll surprise people.

Chris: You've announced Norsca for Warhammer 1 and now Skaven for Total War: Warhammer 2, have you got any other races planned in the pipeline?

Andy: We've always said there'll be three games and we want to get every race in Warhammer that has an army book in there. It's pretty certain that we'll do some more races, even between here and Warhammer 3. I'm not going to tell you what those races are. And, actually, there might be some surprises!

Chris: Surprises? That's one of the things. Skaven are massive, transcending Warhammer, but Norsca not so much. You've not got your lesser known races playing a role

Andy: Yeah. [Talking to Greg] Especially for your guys, that was a fun thing there because it gave you mammoths.

Greg: It's a huge thing for the animations. Mammoths, skin wolves, Fimir as well. They all got their own unique animations, the berserkers and things like that. It was cool.

Chris: Now you've moved west the ocean plays a larger part. Have you thought about bringing back naval combat?

Greg: There's only so much spend or focus on because it's that huge really. If we start going onto having naval combat again then you've got to take some of that focus on the battles onto the naval stuff. Each race is absolutely huge, the art resources, all the models and the animations. If we started focusing on the naval something else would suffer which we didn't want to happen.

Andy: I think what we've learned from experience since releasing Warhammer is that players want big, comprehensive rosters. That's probably where we focus because there's only so many man-months. I think it's safe to say we've probably got one of the largest animation departments in the country. Even having that many people there's just a finite amount of time in man-months that we can do so let's focus on making sure we have big complete rosters and those matched animations.

Greg: Exactly. What we didn't want to do is reclaim or reskin a race's animation sets. We wanted every race to have a distinctive flavour. Even the elves, technically we could have reused the animation sets. There is a slight different flavour, the High Elves are very clinical while the Dark Elves are much darker. You're trying to get that personality in the roster. The same with Wood Elves who are kind of more flourish-y.

Chris: So they're showing their differences even though they're sort of the same race. On a technical question, the first game didn't see a great leap when changing from DirectX 11 to 12, will Warhammer 2 use it more efficiently? How about Vulkan support?

Greg: I'm not so sure on the technical stuff. I'm sure there is but I can't really comment. There's so many cool improvements going on. We've got new animation systems coming in and we've changed the lighting.

Chris: Maybe it's my head, but Total War: Warhammer 2 looks more colourful, particularly in some areas.

Greg: There's been a conscious decision to give it that art direction. Especially the lizard men environment, to give them those extra colours in there.

Andy: It's another great thing about Total War: Warhammer 2. We've got some real different climates to go in. Steaming jungles, mosquito swamps as well as chill - land of chill! - Nagaroth, that kind of scrub tundra. There's some crazy environments. Warhammer 1 had its fair share of madness but it's a whole new variety and breadth of these new different places to fight. 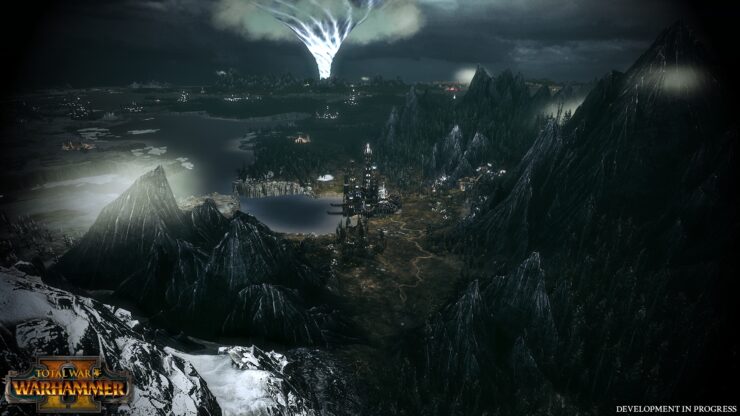 Chris: Will these new environments play a larger role and have a bigger effect on gameplay? Outside of attrition, movement speed and such as that.

Andy: They will have an effect on gameplay on the campaign map. Effectively we've got a climate system. What we had in Warhammer 1 was a very specific occupation system so only Dwarves could settle in dwarf holds for example. When taking the gameplay on a much larger map it wasn't really going to work, it was going to be too limiting for some races.

Instead, what we've done is a climate system where each settlement has a climate. Any race can live in that settlement but the climate will have positive effects for some races and negatives for others. We're getting that Total War sandbox experience but still going to the IP and touching on lore.

Chris: So, for example, a colder climate could decrease the amount of food the Skaven would generate for example?

Andy: Yeah, exactly and lizard men, which are cold-blooded, need to be in hot temperatures. The further north they go into those colder climates you'll see some negative modifiers onto their armies and such if they start settling in those areas.

Andy: I don't know, to be honest. With heroes, each new race brings their own roster of heroes. With the Skaven you're going to get plague priests which is a new hero. There's always been assassin's in Total War, but now you've got one with a tail. Again, the lizard men have a whole new roster of heroes. You're getting different types of heroes depending on the type of race you have.

Chris: Excellent. So on the end-game, which was quite limited at the end of Warhammer 1, not offering much of a challenge. You've already revealed that city-slots have been increased, has the AI been improved, how they build their armies, will they offer more challenge?

Andy: We're always improving the AI. We listened to fan-feedback and increased the city slots to make cities more important and more productive. I think we have improved on the AI armies as well. It's interesting to note that the endgame is one of Total War's weaker aspects. You hit a point of no return where nobody can defeat you.

One of the things about the vortex is that you're in a constant race. There's plot tension, effectively, because all of the AI's are racing you to control the vortex. You could have the biggest empire there is, but if you're two rituals behind the Dark Elves, they're still going to win. Actually, this is the first total war where the AI can actually beat you, so if you don't play well enough you may lose the campaign.

Chris: So they can beat you in the campaign? In other Total War's they could, of course, wipe you out.

Andy: Well yeah, they could. But in this one, they can race you and you get a game over screen which has never been in a Total War. That's a little exclusive for you actually.

What happens is that if an AI has got to the fifth ritual before you, you get summoned to fight in a conclusion. Kind of like and end boss. I won’t go into more detail because there are some plot spoilers in there, but basically you get a chance to fight a battle to stop them from controlling the vortex.

Chris: Sort of like the battle for Mordor at the end of Lord of the Rings?

Andy: Yeah! Likewise, if you're the first one to get to the fifth ritual all of the other races are going to congregate and try to fight you as well.

Chris: That sounds interesting. I just want to get to the end battle now!

Andy: There are some surprises, some plot surprises at the end battle as well.

Chris: Excellent. Looking forward to it. Thank you for your time!