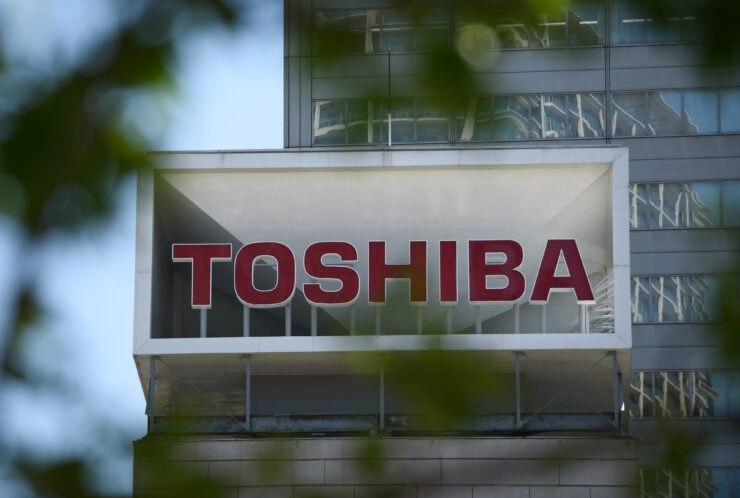 Signage for Toshiba Corp. is displayed atop the company's headquarters in Tokyo, Japan, on Wednesday, May 13, 2015. An accounting probe of Toshiba's infrastructure and energy projects caused its default risk to jump the most in Japan, just as the creditworthiness of Sharp Corp. and Sony Corp. had been improving. Photographer: Akio Kon/Bloomberg

Toshiba Memory Corporation, the world leader in memory solutions, broke ground in a ceremony on Friday on its first semiconductor fabrication facility called the K1 in Kitakami which is located in the Iwate Prefecture in Northeast Japan.

Toshiba expects it to be completed in Autumn of next year at which point the facility will be one of the most advanced manufacturing operations in the world, dedicated to the production of that thing we all use so much, 3D flash memory.

Toshiba Memory continues to advance technologies in flash memory. The company is now leading the way forward with advances in its BiCS FLASH, its proprietary 3D flash memory. This is good news since the demand for 3D flash memory has been increasing the past few years and has no signs of slowing down with demand for enterprise servers, datacenters, and smartphones. Toshiba memory expects continued strong growth in the mid and long term. The new facility will make a major contribution to business competitiveness incorporation with Yokkaichi operations.

Toshiba says the new facility will not only be the largest Toshiba Memory fab, but it will be the most advanced as well. It will be constructed with a seismic isolation structure that allows it to absorb earthquake tremors which should hopefully keep downtime and costly incidents as others have seen in the past, and it will reduce environmental loads by the deployment of the latest energy-saving manufacturing facilities. It will also introduce an advanced production system that uses artificial intelligence (AI) to boost productivity. Decisions on the new fab’s equipment investment, production capacity and production plan will reflect market trends.

Toshiba Memory expects to continue its joint venture investments in the new facility based on ongoing discussions with Western Digital Corporation.

Going forward, Toshiba Memory will continue to actively cultivate initiatives aimed at strengthening competitiveness, including timely capital investments and R&D in line with market trends. The company will also contribute to the development of the regional economy of Iwate prefecture, Japan.