The NVIDIA GRID Platform enables the smooth, seamless interactive experience of a high-performance gaming PC anywhere, on any screen -- including smart TVs, PCs, tablets and smartphones.

NVIDIA GRID is a server designed to concurrently serve up to 36 times more HD-quality game streams than first-generation cloud-gaming systems, while reducing lag. It is fully integrated with a high density of NVIDIA® GPUs, specialized graphics-application streaming software and NVIDIA® VGX™ Hypervisor technology, which allows multiple users to share a GPU.

"By using the NVIDIA GRID Platform, our partners will allow gamers to play anywhere, anytime, without being tethered to a box," said Phil Eisler, general manager of cloud gaming at NVIDIA. "The world's most exciting games can now be played as easily as you can stream a movie, right onto your TV or mobile device. No more discs to shuffle or files to download and install. Just click and play."

Densest GPU Architecture, Broadest Compatibility, Best Interactivity
Consumers already enjoy the benefits of cloud computing to store email and photos and to stream music and movies. The NVIDIA GRID Platform builds on this capability by moving high-end gaming to the cloud, eliminating the need for consumers to manage game discs or fit game consoles next to flat-screen TVs. 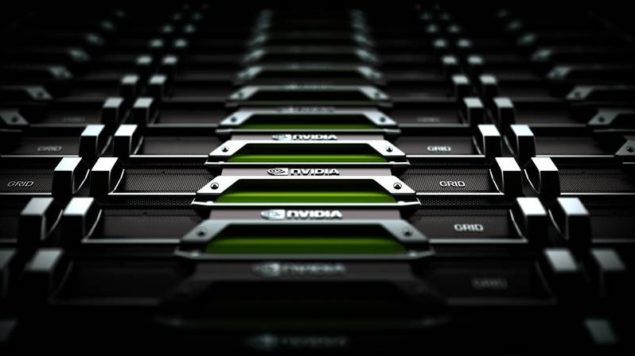 "Consumers love the convenience of any game anywhere instantly, and therefore cloud gaming is the natural evolution of the gaming experience. NVIDIA GRID is a fantastic tool that gives cloud service providers the improved density to make true-GPU clouds a reality and allows our operator, publisher and developer partners to reimagine the gaming experience using the Agawi CloudPlay platform."
-- Rajat Gupta, co-founder of Agawi, which provides B-B cloud-gaming solutions for tablets and TVs.

"In China we don't have game consoles. And therefore we see a large opportunity for cloud gaming in China. The NVIDIA GRID technology is the best that we have seen for delivering high densities of HD-quality game streams to subscribers."
-- Danny Deng, chief executive of Cloud Union, which provides cloud-gaming through China's Telecom/Unicom IPTV network.

"As the pioneer in cloud gaming, G-cluster is always looking for ways to increase the performance of our service. G-cluster is working with NVIDIA to reduce the costs for our IPTV operators and improve the experience for our subscribers around the world."
-- Erik Piehl, president of G-cluster, which provides a white-label cloud-based gaming service through France's SFR and Orange.

"Ubitus is pleased to partner with NVIDIA to bring the world's most scalable cloud gaming systems to market. Ubitus is the leader in providing cloud gaming over fixed and wireless 4G networks, empowering telecom/cable service providers, hardware OEMs and game developers to benefit from cloud gaming opportunities in a truly sustainable manner."
-- Wesley Kuo, CEO of Ubitus, which provides a cloud-based gaming service through Japan's NTT Docomo, Korea's LGU+ and USA's Verizon.

NVIDIA GRID Cloud Gaming Demonstrated Directly to LG Smart TV at CES
At next week's 2013 International CES event, NVIDIA will demonstrate the NVIDIA GRID Platform streaming games to an LG 55LA6900 Smart TV at 1080p resolution. Among the high-performance games that will be shown are "Assassin's Creed III" by Ubisoft.

"LG is very impressed by the capabilities of NVIDIA's GRID Platform to deliver high-quality game streams directly to LG Smart TVs without a game console," said Bae-Geun Kang, vice president, head of Software Development Group, TV Research Lab, LG. "The NVIDIA GRID Cloud Gaming experience on an LG 55LA6900 Smart TV is beautiful to watch, easy to use and fun to play. It is just like Netflix for games."

Dates for cloud gaming service coverage for LG Smart TVs are not available at this time.