Yesterday Ubisoft released a new gameplay trailer featuring many of the game's playable Operators (characters,) as well as details about 10 of the new Operators. Finally Ubisoft has also revealed that Tom Clancy’s Rainbow Six Siege will receive a Collector's Edition, aptly named "Art of Siege Edition". 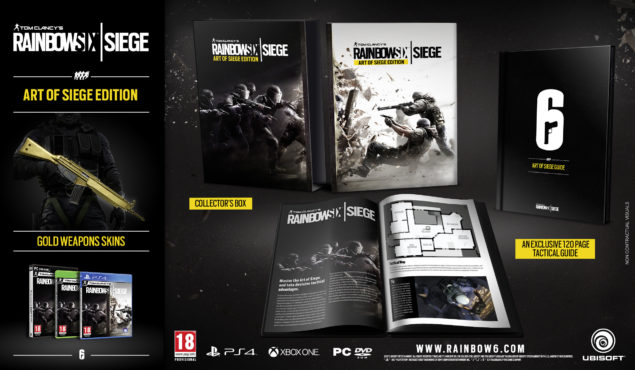 A Collector’s Edition named Art of Siege Edition is available for Tom Clancy’s Rainbow Six Siege. It includes the full game, a collector’s box, a Gold Skins Pack for all in-game weapons and an exclusive 120 page Tactical Guide.

This high quality guide includes every single key element of the game – detailing each Counter Terrorist Unit, Operators, weapons, and maps with the highest level of detail and statistics. All this content has been created with developer team and core gamers’ advice, giving you the most effective results in the field.

So what you see in the above image is what you get with the Collector's Edition.

If you pre-order the Art of Siege Edition, or just the regular version of Rainbow Six Siege, you will receive guaranteed access to the upcoming Closed Beta, and pre-ordering any of the two editions (physical ones of course) via the Uplay shop will get you a numbered steelbook case.

In any case (no pun intended) Rainbow Six Siege appears to be coming out this year, as was previously rumored when gamestop listed it, and now a new advert has been spotted which clearly states "Coming Fall 2015" (thanks VideoGamer.com,) and add the fact that yesterdays Ubi-blog that detailed the 10 new Operators had 2015 listed as the release date of Rainbow Six Siege at the bottom of the post.

Rainbow Six Siege looks quite interesting, but seeing as it's multiplayer only, Ubisoft is slightly giving the boot to the quite large and dedicated Rainbow Six fan base.