Like so many other inventory and database blunders by the wonderful Gamestop, it appears that Gamestop Italia may have spilled the beans as to the release date for one of the most anticipated tactical shooters in a long time, Rainbow Six Siege. 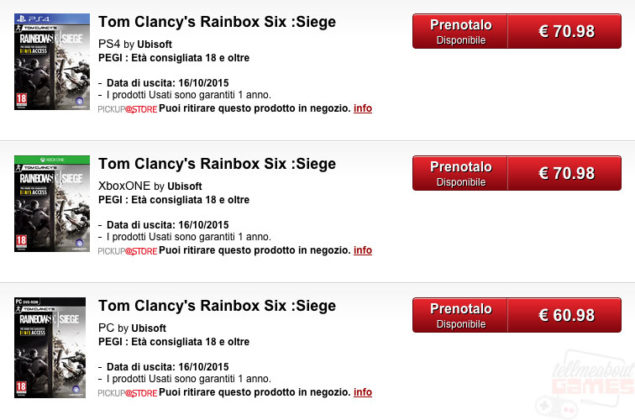 Gamestop Italy may have revealed either a the real date, or a placeholder for what they think is the release date, of Rainbow Six Siege. October 16th 2015.

Of course, it's not uncommon for the Gamstop franchise to simply have a placeholder with an arbitrary date assigned to it. But it would certainly be quite nice if Rainbow Six Siege were to make its way out to us by then. But perhaps it's the actual date they were given?

Supposedly, too, the covers used are not just amalgamation of photos found elsewhere on the Internet or the placeholder you can find on Amazon and even Newegg, but represents the actual official cover photo.

When looking at the date, October 16th, this is a Friday and apparently is quite the significant Friday in Europe according to tmag.it. They say that many important releases have happened around that particular Friday of the month. But I can't find any evidence supporting their claims. October see's no more releases than any other month, in any country.

That second Friday seems to simply be an arbitrary day that was chosen based on when Gamestop thinks that it'll be released given the already public information. It's a guess and a placeholder. Furthermore, game are released when they are done more often then specific days are chosen such as with movies. Announcements of development, however, are indeed based around the major gaming and tech events, but not releases. Release dates are arbitrarily chosen based on the actual development.

That being said, All months and even days of the week seem to be used to release games, in North America and in Europe. That Friday holds no real significance, though it is indeed closer to that holiday season.

But that doesn't mean that I don't want Rainbow Six Siege in October. I'd gladly take to the destructive environments and help myself to some tactical thinking shooter fun. It would be a glorious experience to spend my rainy October days inside with such a game. But that may or may not happen. We have n more information than we did before. Except that perhaps now we want Rainbow Six Siege a bit more than usual.

So no, there is no reason to actually believe that Rainbow Six Siege is going to be released in October. But we can all hope, though.