A brand new Gameplay trailer with footage from the Closed Alpha build of Tom Clancy's Rainbow Six Siege has been released, and later on today Ubisoft will be hosting a Livestream over at Twitch, where they will be playing with the Closed Alpha and hopefully give us some new, nice and juicy information about the game. 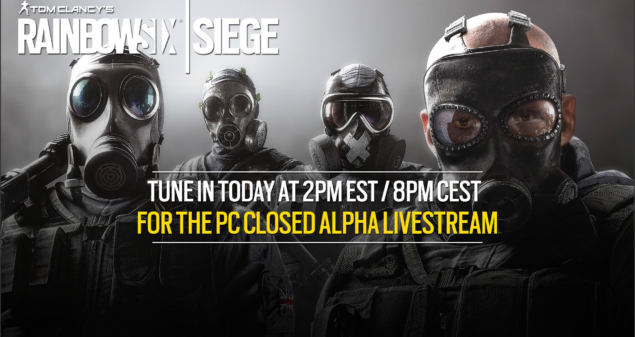 The Closed Alpha of Rainbow Six Siege has been going on for a little while now, and as usual with Alphas and Betas, even if they are heavily NDA'd (Non-disclosure Agreement,) there were some leaks last week, when a reddit user posted some screenshots from the Closed Alpha, as well as some general information about the gameplay.

You can sign up for the upcoming Closed Beta over at the Rainbow Six Siege homepage here, or if you pre-order the game (which recently got a rumoured 2015 release date due to Gamestop listing it,) you will receive a code that grants you "Guaranteed Beta Access" as a pre-order bonus. Now then, onto today's trailer which you can find below!

Most of the gameplay and mechanics shown in the trailer has been seen previously, repelling down from the roof of a house to breach the windows, blowing holes through walls and floors to gain access to rooms that have been barricaded, or just to use it as a surprise point of entry into a room where the enemy might be. Nonetheless it does look rather good both graphically and from a gameplay standpoint.

Ubisoft will be hosting a Twitch-stream over at their official channel later on today, there are no official details about what they will show us in the way of maps or gameplay during the livestream, but the stream starts at : 11:00 AM PST / 2:00 PM EST / 7:00 PM BST / 8:00 PM CET. The stream is embedded below, so either check back here when it is about to start, or head on over to the Ubisoft Twitch channel.