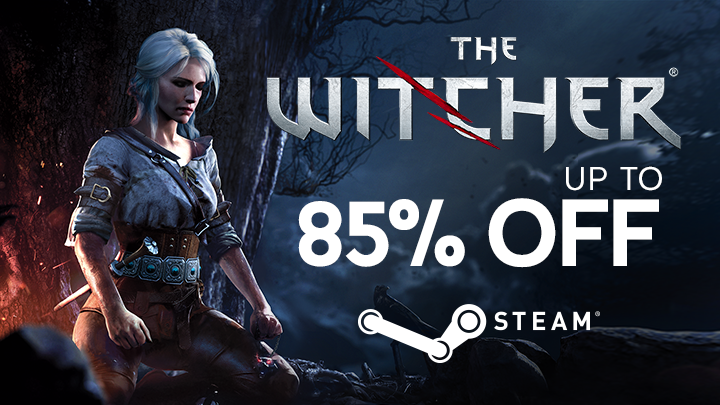 The Witcher Steam sale is now live with discounts up to 85% on The Witcher games.

With many sitting at home to combat the COVID-19 outbreak, this new Steam sale might be interesting for those looking to fill up their free time. Steam is currently having a sale on The Witcher franchise with some rather interesting deals.

Steam is offering CD Projekt Red’s latest Witcher installment with a discount of 70%. This applies to the splendid Game-of-the-Year Edition, which includes the base game and all DLC, and the regular version of the game. Both The Witcher 3 expansions, Blood & Wine and Hearts of Stone, are on sale as well with a discount of 60%.

The Witcher 2: Assassins of Kings Enhanced Edition is currently on sale with a discount of 85% for just € 2.99. This is a complete steal and I strongly suggest getting this gem in case you haven’t already done so.

The second installment in the RPG saga about professional monster slayer Geralt of Rivia, The Witcher 2: Assassins of Kings spins a mature, thought-provoking tale to produce one of the most elaborate and unique role-playing games ever released on PC.

A time of untold chaos has come. Mighty forces clash behind the scenes in a struggle for power and influence. The Northern Kingdoms mobilize for war. But armies on the march are not enough to stop a bloody conspiracy...

The game where it all began for Geralt – the original Witcher. Also available with an 85% discount for merely € 1.19, this enhanced edition of the game contains a great number of technical upgrades, as well as a lot of new features, including over 200 new animations, additional NPC models, improved stability, faster loading times and much more.

The Witcher is a role-playing game set in a dark fantasy world where moral ambiguity reigns. Shattering the line between good and evil, the game emphasizes story and character development, while incorporating a tactically-deep, real-time combat system.

Become The Witcher, Geralt of Rivia, and get caught in a web of intrigue woven by forces vying for control of the world. Make difficult decisions and live with the consequences in a game that will immerse you in an extraordinary tale like no other.

Available with an 80% discount for only € 11,85, this bundle includes The Witcher, The Witcher 2 and the standard version of The Witcher 3 Wild Hunt.  In case you were planning to get all three games, this deal saves you even more instead of buying them all separately.

Alongside the main games, Steam also has the games' soundtracks on sale alongside The Witcher Adventure Game and Thronebreaker: The Witcher Tales. Check out the official Steam Witcher sale page for these deals.