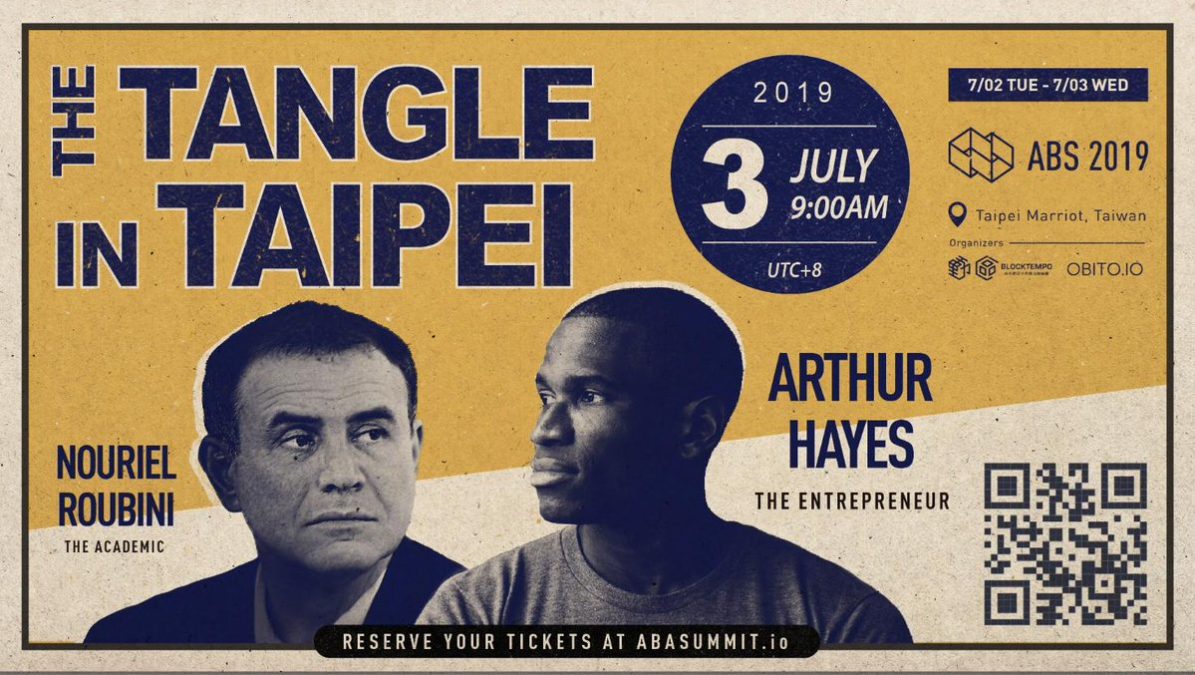 The much-hyped ‘Tangle in Taipei’, the highlight of this week’s Asia Blockchain Summit in Taipei, was less of an informed debate about the merits of Blockchain technology and more or a cacophony of cursing, namecalling, and perpetual interrupting.

The debate -- littered with profanity and requests for civility by the moderator -- between Nobel-award winning economist Nouriel Roubini and BitMEX CEO Arthur Hayes started with Roubini accusing Hayes (and other crypto exchange executives in the audience) of being something of a mix of a “snake oil salesman” and “degenerates” that profit from gamblers and suckers. Roubini took particular aim at the fact that exchanges now offer leverage (credit given to traders to allow bigger trades) of up to 100x.

“Shitty behaviour occurs in this industry – scammers, criminals and so on. Next to me is a gentleman who works with degenerate gamblers and suckers, not accredited investors,” said Roubini. “BitMEX is just an example of everything that is sick and wrong in the industry.”

“We need a choice in a world moving from analog to digital,” Hayes countered. “Like credit cards, Bitcoin and Blockchain will take decades to scale."

Hayes replied: “Bitcoin and crypto markets are the only real free market left in the world,” and in five years from now, crypto will be “a trillion dollar plus asset class, which is still very tiny.”

This debate, hosted by the BBC’s Andrew Neil (of the Ben Shapiro meltdown video fame), won’t be seen by the public anytime soon. Unlike the rest of the conference, this event wasn’t live-streamed -- BitMEX controls the rights to the footage of the debate. The audience was also barred from recording video of the event. BitMEX says it will release highlights of the event at a later date. Only a transcript, taken by an unaffiliated member of the audience, has been published so far.

Shut up and release the tape of our debate. This was the only session not streamed live as you mafioso gangsters decided to censor it with hush money and keep the only tape for yourselves. Typical bully behaviour of yours. Release the tape you coward @CryptoHayes! Talk is cheap! https://t.co/guNLMkww5T

Another @CryptoHayes scam: he didnt allow the blockchain conference to record our debate and beam it live. He controls the only recording of it and will only release heavily edited "highlights". I destroyed @CryptoHayes in the debate and he is hiding. RELEASE THE TAPE YOU COWARD!

From Analogue-> Digital , takes a bit of time just like #Bitcoin ⁦@Nouriel⁩, be patient my friend. pic.twitter.com/CzN9krOxRl

(Note: the debate was recorded on DSLR cameras with SD cards)

But even if the event was live-streamed, the actual content of the debate would not do much to present a solid criticism of Blockchain technology or even a rebuttal. For his part, Roubini relied upon on namecalling, comparing Hayes to a drug dealer or a member of the Sicilian Mafia, and criticizing cryptocurrency without looking at Blockchain technology in a broader perspective.

While Bitcoin is unlikely to ever have mainstream acceptance as a method of payment, given its volatility and inefficiency at scale, the underlying technology -- Blockchain -- already has plenty of real-world solutions. Blockchain is currently widely used for supply chain security, helping track and authenticate items in a variety of different industries: food from farm-to-table; diamonds, to ensure jewlery is ‘blood diamond’ free, Hard disk components to ensure stability and security.

On the other hand, Hayes came off as too much of a vulgar Randian-slash-robber baron: Too obsessed with comparing government oversight to sodomy, and criticizing Roubini’s lack of adoption rather than making the case for crypto’s utility outside of speculation. During the debate, Hayes had an anecdote for the market demand for BitMEX: He said that if we put some chickens on the stage and placed a QR code on each chicken, we'd have $1 million wagered from the crowd in a few minutes. In many ways, this is an admission that BitMEX is a venue for speculation and bets, rather than investing in a fundamentally sound currency or commodity.

For cryptocurrency trading to shed the perception Roubini prescribes -- a glorified casino -- it needs to mature. For as much as the stock market is criticized, stock prices do reflect a belief in the underlying fundamentals of a company, coupled with the broader macroeconomic conditions that may affect its fortune; Forex in a similar vein: the movement of currency pairs is backed by economic data and politics.

Crypto and Blockchain does have something like a legitimate equity market in the works, with STOs, but that’s still a long way off. Until that becomes mainstream, Hayes will need to do a better job at marketing.

It might help if he allowed the debate to be live-streamed. The quality of the actual content aside, what's there to hide?