The release of The Outer Worlds is soon to be upon us, and our excitement has reached a fever pitch. The game promises to be a true spiritual successor to the likes of Fallout New Vegas and other classic role-playing experiences, according to the developers, and I'm tempted to believe them after I spoke with Obsidian's senior designer, Brian Heins.

I met with Brian during Gamescom 2019 during what was no doubt an incredibly busy schedule, and he gave me the opportunity to learn more about The Outer Worlds. While with him I asked about the gameplay of the game, the environments, the settlements and more about The Outer Worlds, but also their approach to development with Unreal Engine 4, and how the Microsoft buyout affected the team at Obsidian.

As a reminder, The Outer Worlds will be released on October 25th for PC (on Epic Games Store and Microsoft Store), Xbox One, and PlayStation 4. A Nintendo Switch port is coming later. 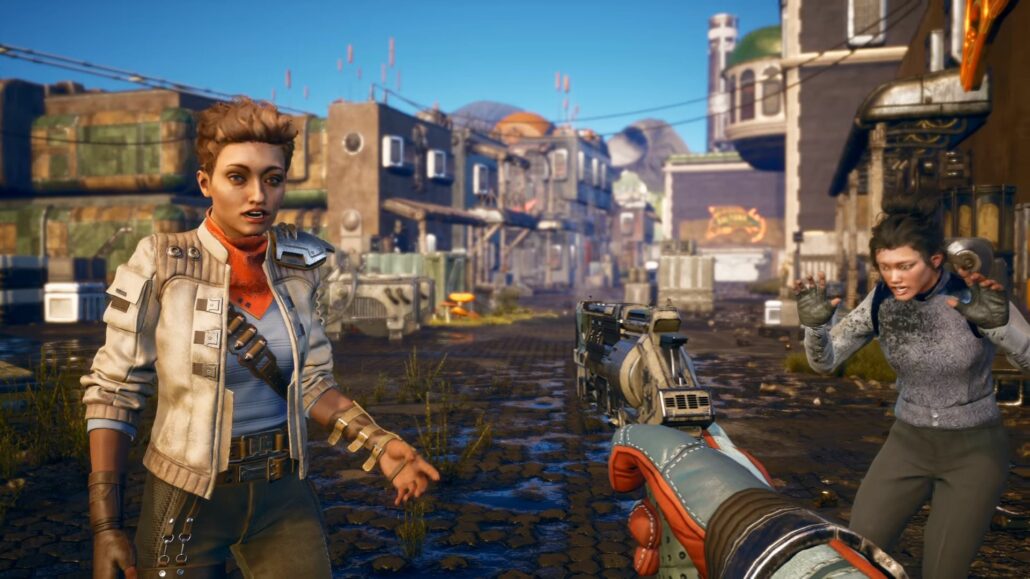 What made the team really want to make this game?

The Outer Worlds, for us, is our spiritual successor to Fallout New Vegas and having the creators of the Fallout franchise back together, Tim Cain and Leonard Boyarsky, is an excellent opportunity. They're making a brand new IP for us here at Obsidian, and they've crafted the overall tone of the world, this kind of dark, absurdist world that we've created where corporations run everything. But other corporations are very good at what they do. It leads to a lot of great moments. As a team member, it's fun being able to work in this world.

How has it been working with Unreal Engine 4?

Fantastic. We worked with like previous versions of the Unreal Engine on other games in the past. There's a lot that may have improved both on the blueprint scripting side, and how the tech works, that it's been very freeing really to jump in and start. There are certain things you don't have to worry about. It's already handled by the engine. You don't have to stress about how certain things work, and it creates beautiful environments in the game.

From what I've seen so far there is a big space-age influence, but also there is also an art nouveau style. It's something that I wouldn't expect to work so well, but when you see it, it absolutely fits. How did those mix of styles come together?

So a lot of it was looking at the original inspiration for the game and looking at like the pulp sci-fi, the 20s, and 30s. The idea of that aesthetic, and that time frame; "How would that project forward into a sci-fi future if culture just focused on that and developed from that point forward?" So, there's an almost retro sci-fi feel to the game we wanted to get where it's a little bit of nostalgia, a little bit of futurism mixed together. So when Leonard and our art director, Daniel Alpert, were figuring out the look of the game, that was one of the things they looked at, and it was a way to help get that feel and push it forward into a cool sci-fi space.

You've said that it's a spiritual successor to Fallout New Vegas and other games, how do you think fans are going to react to the finished product?

Hopefully, they're gonna love it. That's always our goal. And from the reaction we've seen after the announcement, there's a lot of interest in the game. So if you're a fan of New Vegas, there's a lot you're going to love about The Outer Worlds. Even if you haven't played a game like this in a while or before, it's a great experience to jump into. The gameplay is fun and exciting. There's not just a good story being told, but moments of humor, and a lot of great characters you'll find as you're playing through the world, we've got some fantastic voice actors in the game. So there's a lot of characters that really have come to life over the past few months as we've gotten the voice actors in, whereas before we used auto-generated text to speech for placeholder VO, and it was so dry. Like, this is never going to work. Suddenly we get an actual voice actor performance and she's like, my favorite character in the game now.

How was it for the studio when you had the Microsoft buyout? Did that change anything, or were the attitudes in the studio influenced at all?

It didn't change much on The Outer Worlds because obviously, we're being published by Private Division. That is still intact. On the studio level, for me personally, one of the nice things is that now that we're part of Microsoft, we're focusing more on what the next games are going to be, rather than, how do we pitch the next games?

You have the assurance that you can just make a game.

Yeah. There is obviously a greenlight process. We don't always have carte blanche to do whatever we want. That'd be fantastic. It definitely is much more focused on like; "okay, let's make the games cool. Let's make the games we want to make." And that's one of the things that when we were acquired that Microsoft's said to us is like; "we're buying you because we want you to keep making games the way you've been doing, not to change you." And that's been reassuring a lot of people on the team, we're not suddenly going to be asked to be a different studio than we have been. We have been given the assurance to keep making these games that our fans like, and hopefully on a grander scale, and better quality.

And how did the decision to launch on Nintendo Switch come about?

So I like to say, this is not true, but I say one of our producers in the studio, Matt Singh, he's a huge Nintendo fan. So I like to think that he just badgered everybody until they put it on the Switch just to appease him. But obviously, that's not the case. It's a great opportunity, Switch is a great platform, and we're always looking for new ways for players to experience our games. So Private Division, they were trying to figure out if it was possible to get this game onto the Switch. And they were working with Virtuos who have a lot of experience with other games, and they're now working on porting the game to the Switch platform, and it's going to be fantastic. So, we've seen some early builds playing on the Switch, and we're like; "Okay, this is it, this is going to happen. It's looking pretty good!"

The main character in The Outer Worlds, are they the silent protagonist, or are they going to be more characterized?

Basically you get to create your character, male, female, whatever personality you want. So the character isn't voiced, you'll be picking responses and you'll have fully voiced responses within your campaigns and other NPCs, but we wanted to make sure you got to basically create whatever character you want to play, whatever power fantasy you wanted to have you get to experience that in the game. So we decided not to voice the main character just because it would suck to only have a limited number of dialogue options to choose from.

I've already seen the whole bunch of different biomes and environments in The Outer Worlds, and I want to know, are there any which are your favorite?

There's one that you haven't seen very much of, the trailer we just released shows a brief example, there's an asteroid that's contained in an energy field that's creating the atmosphere. And it's one that, when we're working on it we're like; "we hope this is going to be cool, but we're not sure." And then our artists got it. Basically, in a week transformed it from what it was, to almost the final product. We're like, "holy crap, this works. Excellent." It is one of my favorites spaces because it feels very sci-fi, you're wandering around this rocky, almost lunar surface with a huge starscape above you, energy field around you, crashed ships all over... It's one of the most sci-fi feeling areas in the game was one that we were almost questioning if it would work. And then after a week of art, it's like; "Okay, this is great. This is one of my favorite areas in the game now."

Between that and the comment on voice acting, it sounds like some of the aspects of the game really came together late on, are there any other aspects where you were unsure of them at first, and then when you fleshed them out further felt differently?

Many years ago, Penny Arcade was working on a game and one of their comics said literally; "wow, games suck for a long time until they don't." And that's true for every game, everything you work on, everything's in a rough state, everything is just not quite coming together. And you turn around one day, and all of a sudden, art is coming in, audio is coming in, gameplay systems are being fine-tuned. Suddenly it's like; "oh, this is fun now, when did that happen?" For every game, there's a space of a month and a half to two months, where all the stuff which is in various unfinished states. Now it starts coming together for the final experience. "Okay, this game is actually not just going to be unfinished the entire time, this is actually a fun experience."

How many larger settlements can we expect to see in the game?

On each world, there's at least one major settlement. A big example is Monarch, we showed it at a press playthrough in July. There is Stellar Bay, which is the primary capital of the world. But there are also areas like Amber Heights and Fallbrook that are also two other hubs in the world as well. So that alone has three big settlements you can explore and find quests in. And then the world of Terra 2, which is more segregated, the corporations control it more heavily, so each area is more restricted and travel between them isn't allowed. Each of those has its own set of NPCs and quest dealers.

And how long has it been in development for?

Tim and Leonard first started working on it, just the two of them, probably around almost three years ago now. And it was just them for many, many months while they were figuring out what the IP was. And then they got a few people to start working on stuff and then got more and more people. So I think it was a small team for probably the first year or more, and then kind of ramped up and has been in production for about two years. And now we're kind of ramping down to getting ready to ship it out the door.

My last question is, is there anything else I should know about The Outer Worlds?

I think if you are looking for that great, classic role-playing experience, if you if you're a fan of Knights of the Old Republic 2, Fallout New Vegas, and you want to play those types of games again, The Outer Worlds is going to be that great gameplay plus an entirely new sci-fi story, new world, new IP, with a lot of great humor in it and you'll have a great time playing the game.

Well, I think that's everything. Thank you so much for talking to me.