The New Samsung Galaxy Buds Leak with an Interesting Design 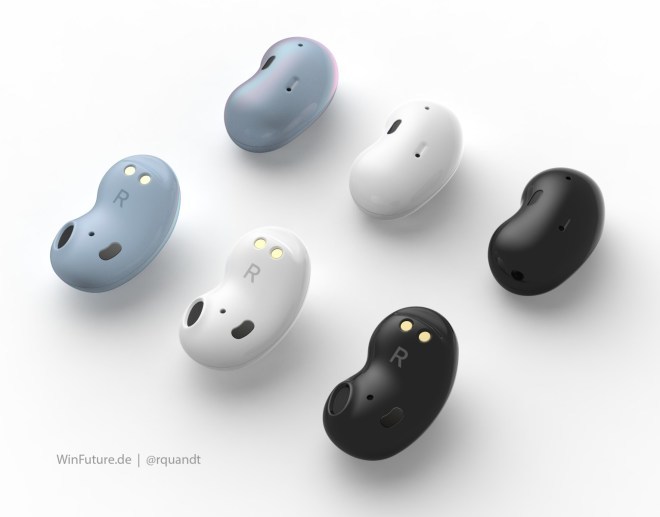 The original Samsung Galaxy Buds were among the most popular true wireless earbuds that came out last year. So, naturally, when Samsung decided to release the Galaxy Buds+. the excitement was all over the place. After all, we were getting an improved version of a very renowned pair of  true wireless earbuds. Not to discredit the Galaxy Buds+ but they were not true successors of the originals, but more like an incremental upgrade, that was still pretty good.

We recently reported about how AKG, a company owned by Samsung, is also released their own take on true wireless earbuds that seem like they are taking on what Samsung has to offer in the market.

However, a new leak suggests that Samsung is working on a pair of Galaxy Buds that look entirely different than what they have released in the past, and in all honesty, these do look strange.

The leak in concern is pretty convincing as we are seeing the new Galaxy Buds appear in a number of different colours as well as angles. These Galaxy Buds resemble kidney beans and happen to have no stem at all. As per the leak, these are code named "beans", owing much to their shape and this design, this design will allow them to sit much more flush than the normal design we are aware of. These are also more suitable for people who have smaller ears.

However, this design language is going to have a pretty significant impact on sound isolation and possibly the overall sound quality as well because these earphones are not going to have any silicon ear tips. You can have a full look at the Galaxy Buds below.

The model number for these Galaxy Buds is SM-R180, we know through leaks that they will come with two speakers, one for higher notes and other for lower notes, which will help in providing a better overall audio experience. The earbuds will also feature multiple microphones for better noise isolation and overall call quality.

The main things to note here is that these are still in their early stages of development, and there are chances that Samsung might make some significant changes to the overall design of these earbuds altogether.

At the time of writing, we do not have much information on pricing or availability, but we will keep you posted on more information as it comes through.