The Most Innovative Motherboard Concept Ever – The ASUS Prime Utopia 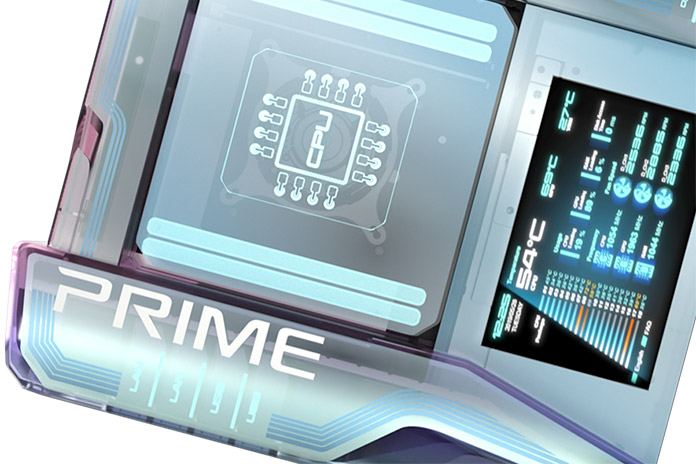 Asus has been through 30 years of motherboard manufacturing. They have seen what others have not seen and have experienced what others have not experienced. With that, they have decided to take motherboard innovation to another level with Asus Prime Utopia. This is only a concept board, so we only know what it features and not any specifics such as the chipset. Personally, this is one of the most exciting products I have seen at Computex, and it has only started.

Relocating power-hungry graphics cards removes their thermal footprint from the main chamber, reducing the ambient temperature for the CPU and other components. It also prevents the cards from obstructing airflow across the motherboard and its massive M.2 heatsink. Effective SSD cooling is crucial for the future because without it, even today’s NVMe drives can suffer temperature-induced performance throttling under sustained loads.

Throttling is more commonly associated with lowering CPU clocks in response to higher temperatures, but processor performance can also be constrained by VRM cooling. The circuitry feeding current to the CPU has to stay within its optimal thermal range to deliver full power. That becomes increasingly difficult as overclocking pushes more cores to higher frequencies, especially when those cores share silicon with faster PCIe and memory controllers that have their own heat signatures and power requirements.

Since way back in 2007, Asus has been a leader in supporting liquid cooling for power-hungry motherboard components. The Utopia’s unique layout leaves enough room to raise the stakes with an expansive water block capable of chilling monster VRMs. There’s more than meets the eye with this stealthy cooler, which hides its pump and plumbing around back to maintain a cleaner look up front.

Splitting the layout leaves more room for extra expansion slots that take advantage of growing bandwidth in the CPU and accompanying platform. In addition to mounting a graphics card at the back, the concept motherboard hangs four M.2 slots off the front face, enabling insanely fast SSD RAID arrays with ample cooling and easy accessibility. High-end systems rarely feature this many M.2 slots and those that do typically bury them behind graphics cards that obstruct upgrades and increase drive temperatures.

Additional expansion capacity points the Prime Utopia toward a more versatile future, but flexible I/O is what really pushes it forward. Instead of relying on a fixed layout of external ports, the board combines static ports with four modular blocks that let you define your own spec. Each block connects via PCI Express and is completely self-contained, housing both the physical port and any auxiliary silicon required to drive it. You can pick the right mix for your needs and adjust the payload as necessary to meet new requirements. This allows you to put what you need and skip on what is not necessary.

Aura Sync illuminates the translucent motherboard shroud, giving the smooth external skin a healthy RGB glow. Even with the lighting turned off, the shroud’s special paint reflects different colors depending on the angle. The bold shell helps hide additional cabling and also frames the 7” OLED that serves as a dashboard for your build. This removable display sits comfortably on a desk thanks to an integrated kickstand. It can connect to the system with a cable or via Wi-Fi, allowing updates to follow the screen anywhere on your home network.

Asus was the first to put OLED on their motherboards and with this screen, they decided to go all in. The screen can monitor anything of your choosing. The coolest feature is turning the system on and off by touch with this screen. Potentially hinting at a touch OLED display.

Streamlined styling has been a hallmark of the Prime family since its inception, and the Utopia concept consolidates cabling to carry that look across the rest of the system. Asus developed a proprietary Hydra Cortex fan header that supports up to four fans from a single motherboard connection. Driven by dedicated ICs, this interface allows independent tuning of both rotational speed and addressable RGB lighting for each fan, so you can have a clean look with cable management without giving up anything.

This board still needs development, but it will be on display on Asus booth which booth M0410. I will make sure to take a look at this because a glance at the future lies within this motherboard. Only one thing can be inferred about this, the price will be very high.