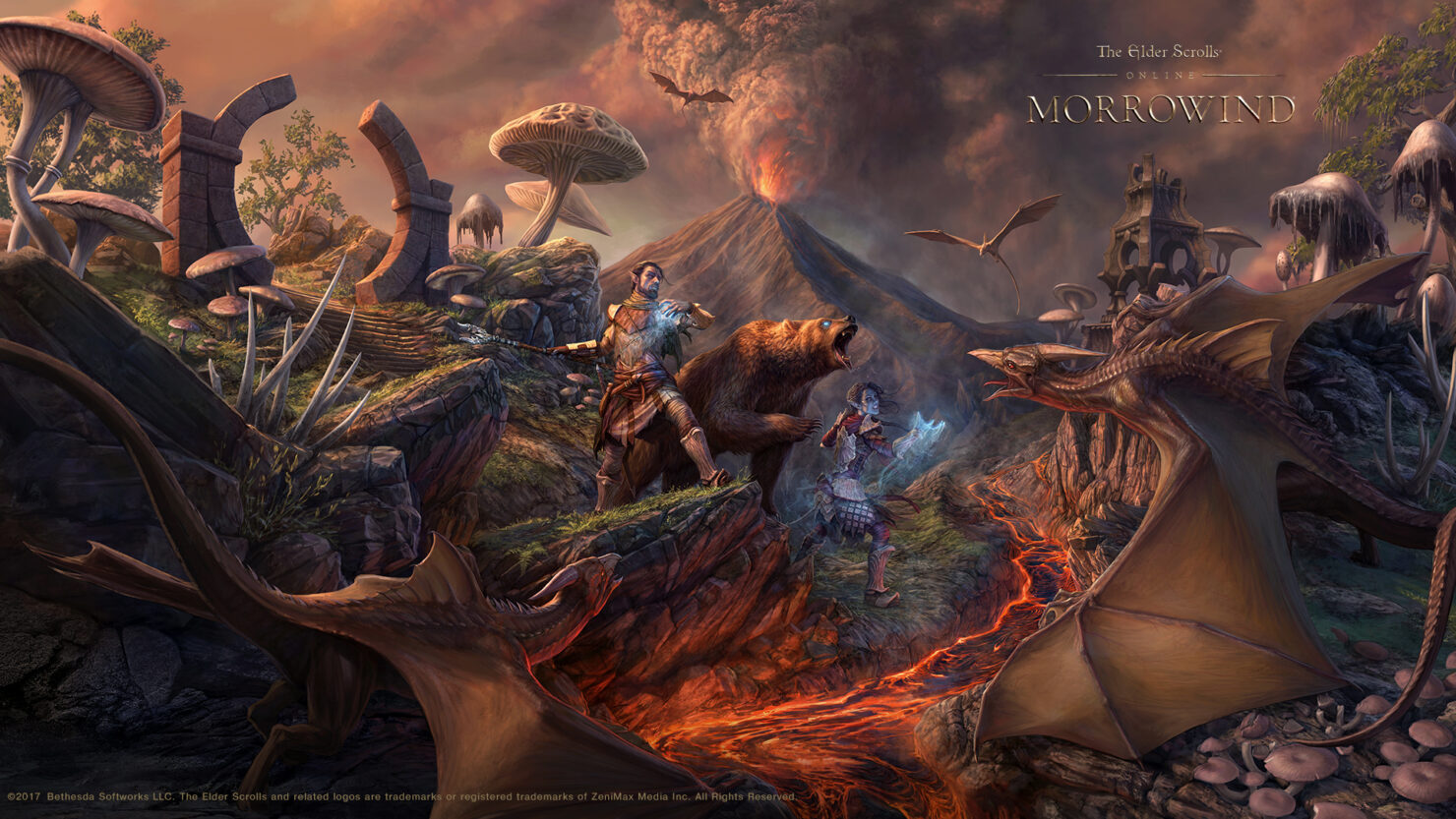 Elder Scrolls Online has had a turbulent time since it launched three years ago. It's come along leaps and bounds since then. Expansions have brought much-needed Elder Scrolls flavor to the online game, which now has staples of the series like the Dark Brotherhood and the Thieves Guild. Furthermore, expansive areas like Wrothgar were added. Not to mention the huge success that is One Tamriel which opened the game up in true Elder Scrolls fashion. Zenimax Online Studios have gone all out to build on this success and, fifteen years after the original, Elder Scrolls Online: Morrowind will be released.

Three months ago I wrote a piece after attending an event covering The Elder Scrolls Online: Morrowind. If you've read this piece then my excitement for the expansion should be fairly clear. Fortunately, I've been given the opportunity to test out Morrowind and a number of the new features. All I can say is that my excitement seems to be wholly justified.

My first experience of Morrowind came a few years after its original launch in 2002. Back in 2002, when I was a PlayStation child, I was still replaying multiple Final Fantasy titles, absolutely adoring GTA: Vice City and finding myself enamored with Mafia. 2004 and the release of Rome: Total War brought me to PC and games like Morrowind sucked me in. It may leave me somewhat partial, drawn in by nostalgia.

It's something to consider because this addition really gets that familiarity, just with some differences that make it feel fresh. During my travels throughout Vvardenfell, I opted to both use my main character as a means of exploring higher end content as well as rolling a Watcher, the new class, to experience the new fresh start that the expansion offers.

Starting afresh immediately puts you into the action. The lovable, cheeky but no-nonsense Naryu Virian rescues you from a band of slavers. You're immediately tasked with escaping and helping Naryu carry out her writ of execution on the slaver captain. Once finished you find yourself in a very familiar place, with ancestors of those you met fifteen years ago. It may be set 700 years before the original, but welcome back to Seyda Neen. Welcome back to Vvardenfell.

The lands of Morrowind will be immediately familiar to anybody who's traveled them before. For those that haven't, this is the chance to explore the largest landmass added to Elder Scrolls Online to date. What makes it so special isn't just the size of the update, but just exactly how much variety you find within Vvardenfell. Ashlands, teeming with lava flows. Coastal wetlands with the welcome return of the Silt Striders. Even verdant woodlands, maybe even mushroom-lands? The variety is extensive and you can explore it all.

What's hard to show and something I want to avoid spoiling is just how much variety you have in quests. Anybody familiar with the land and the cultures within it will know that there's always considerable strife. The main storyline is very politically oriented as the conflicts between major Dunmer families go on as they will 700 years in the future. You'll gain the ability to do work for the Morag Tong. You'll pick up a number of entertaining side quests along the way, as well as some quirky, or simply weird ones.

However, what also comes into play during the main story is Vivec, the living god himself. A large part of the story is simply saving him, Vivec City and the world as a whole. There are a huge variety of factions to introduce yourself to and to learn about. Throughout the game, these side quests and the new Morrowind content will undoubtedly offer a huge number of hours. In addition, there are great throwbacks to those familiar to fans of the original. There is little doubt, however, that it's still more of what already makes Elder Scrolls Online as great as it is already.

ESO: Morrowind offers far more than just a new land to explore and quest in. As well as exploring with my Dragonknight, I also rolled a brand new Warden. This is the first to have been introduced in the three years since the game's launch. It's also well equipped to face the trials of Tamriel. The Warden offers a wide variety of options for customization. This is particularly true as the three skill trees offer almost completely different ways of playing. Both the elemental damage and defense of Winter's Embrace, the healing potential of Green Balance or the ability to call the wilderness of Tamriel to your aid with Animal Companions. As with other classes, you are free to have a mixture of skills from each tree.

For the most part, I've found the new Warden class to not really offer that variety that was implicitly suggested. Explained as a hybrid class, this is certainly true, but even as a hybrid it doesn't seem to allow any real level of duality. Some skills can complement, such as the shielding abilities of Winters Embrace with the Offensive abilities of Animal Companions. This is all at least true of earlier levels. I'll be open in the fact that my Warden reached level 35. This is from my intentions of creating one from fresh on release, to fully explore Morrowind with it.

More than just a new class, the new chapter also offers a brand new way of player versus player combat, battlegrounds. During this beta, I've struggled to actually get in a battleground, but I would be remiss if I didn't mention them. They're designed to offer a quicker entry into PVP fighting, without having to head to Cyrodil. Pitting four vs four in a variety of game types and arena's, what I know about them certainly interests me and once released, with a large enough player base, I can certainly envisage them being active.

Morrowind, as the new chapter of Elder Scrolls Online, has certainly sold itself to me. That should be certain from the simple fact that the only reason I haven't done more with the Warden is that I want to play it from start to finish on the release of Morrowind. If you're already a fan of Elder Scrolls Online, this will certainly offer a huge amount of content to enjoy. However, as it's more of the same, not counting battlegrounds, I can't say it'll bring in those new to the series. All things considered, it’s seeming like a fantastic addition to what has turned into my favorite MMO.

The Elder Scrolls Online: Morrowind will release on June 6th for everyone, but existing players who upgrade from the current version of the game will have Early Access on May 22nd.

You can pre-order it via Amazon, just choose your platform from the dropdown menu.