There's little doubt on the impact that The Elder Scrolls III: Morrowind has had on gaming. It was one of the games that really put western RPG's on the map, and also laid the groundwork for one of the biggest franchises in the genre. Bringing back such a loved area is always a risk, something ZeniMax Online Studios have fully admitted. That's why it's so interesting to see how they've brought it back to life.

In the event I attended at the National Transport Museum, myself and attendees from other outlets got to see a large number of details on the next chapter of Elder Scrolls Online. Fifteen years after the release of the original, June 6th 2017 will welcome you back to Morrowind. Promising 30 hours of new content, heaps of nostalgia and so much more, now's the time to pay attention to what is now a stellar MMO.

Elder Scrolls Online: What Came Before

There's little doubt that ESO has had a mixed past. It's three years old now, having launched in 2014 on the 4th of April, to average or good reviews. Primary complaints came from what was considered a 'lack of Elder Scrolls feel'. In addition to this, the original game lacked a large number of aspects that permeated through the series.

The studio understood and respected these complaints. To support the game, they went further than a number normally would in improving it. The justice system was added, letting people steal and act as an outlaw as they could in the single player titles. Following this, leveling was improved with the introduction of the Champion system. The game started to feel like the Elder Scrolls that people wanted and it was only the beginning. 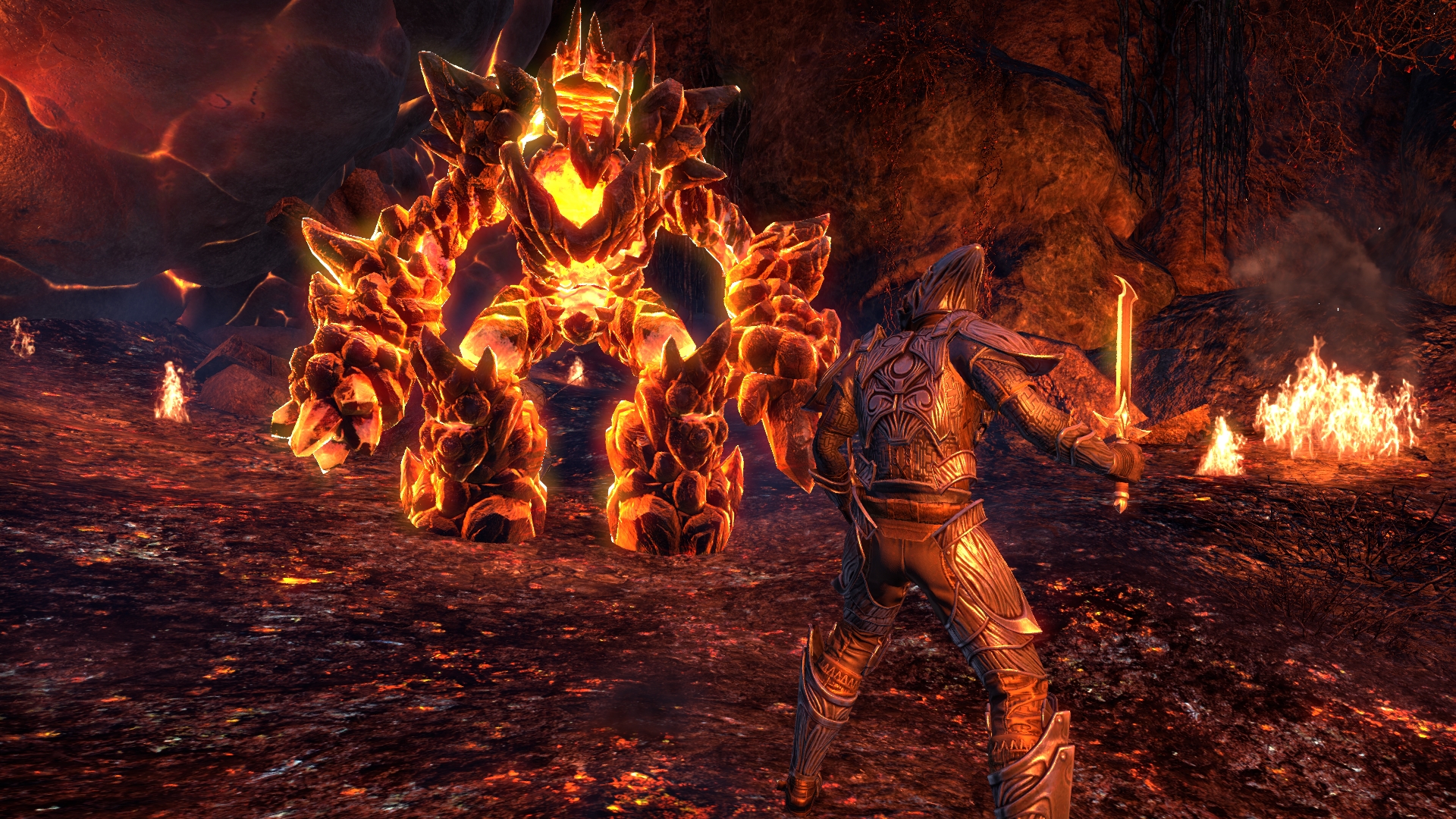 This is when ESO went Free to Play. Mandatory subscriptions were removed and the crown store was implemented. While some parts of the crown store were definitely useful in gameplay, nothing was pay to win. Cosmetics were good, items useful and the best you could do is buy functional items that weren't better than those made by specialist crafters in-game. This still runs through the game to this day, acting as one of the fairest in-game stores around.

Elder Scrolls Plus also came forward as a subscription alternative, offering access without direct purchase to the large number of DLC's that came. From the Imperial City, Orsinium and the Thieves Guild and Dark Brotherhood, the DLC came in reasonable increments and always offered good experiences. The subscription also comes with a number of crowns, for use in the store. Even today I'm still a subscriber, paying in six-monthly increments.

Elder Scrolls Online: Tamriel Unlimited was the relaunch that brought forward ESO Plus, moving the game away from subscription. When it was relaunched as Tamriel Unlimited the number of players trebled. Closely following this came the launch of the game on consoles and that was, quite literally, game breaking. 350,000 were playing consecutively with a further 120,000 queued. ZeniMax knew it was a success from the fact that they had to expand, they had more players than could actually play.

Steam, Shadows of the Hist DLC and a launch in Japan came after. This all led up to One Tamriel, the biggest release of what the company now calls the game's launch phase. You could now go anywhere, play with anybody and the game reacted to you, leveling with you. Offering a mixture of content in every zone and finally offering what the players wanted from the start; a true Elder Scrolls experience. 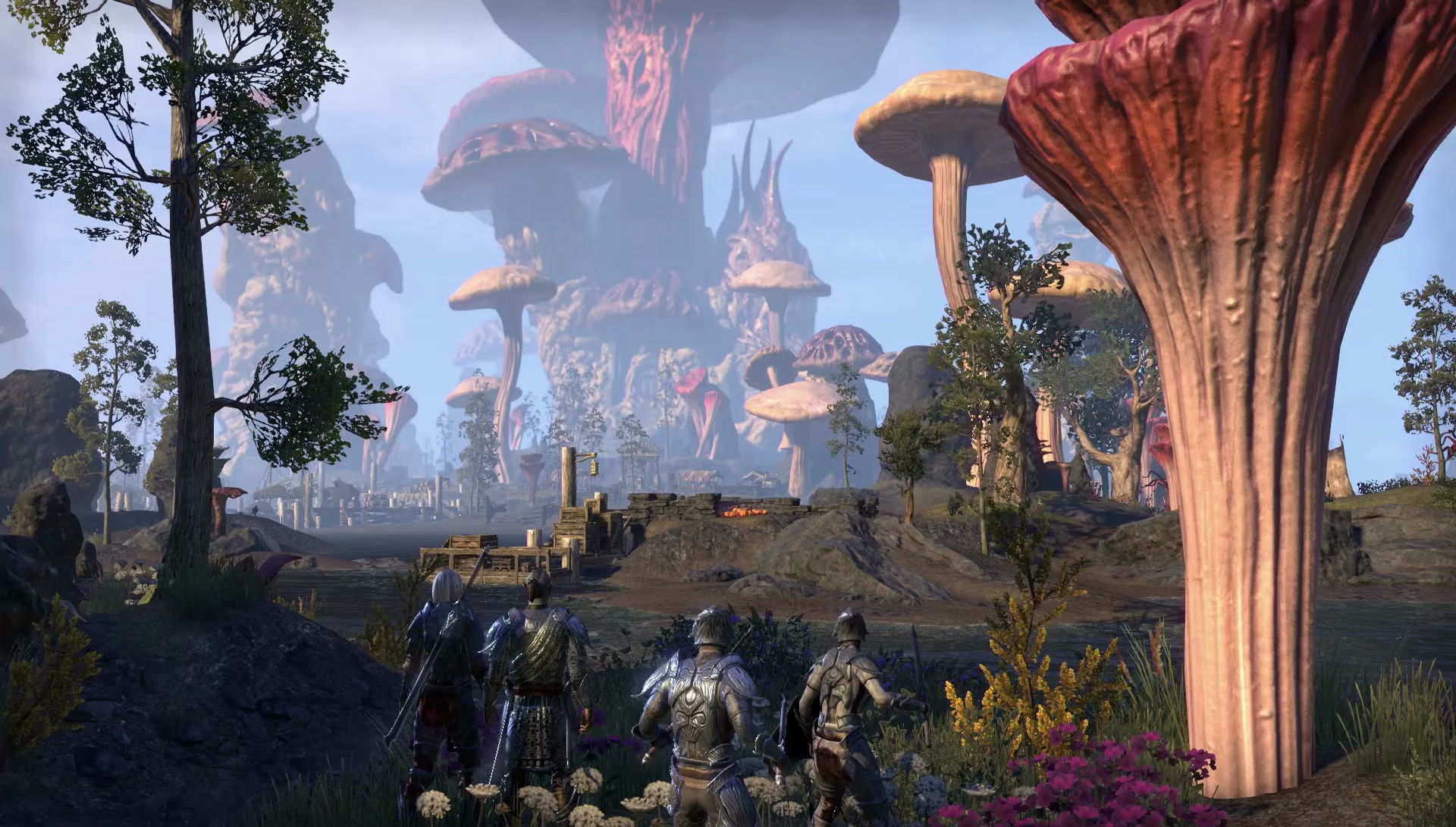 Welcome Back to Morrowind

The Elder Scrolls Online: Morrowind will be familiar to fans of the series. However, like anywhere else the game covers, there will be slight differences. This is Vvardenfell 700 years before the one we explored just fifteen years ago. To stay true to the land we all know and love the studio went back to it and created this based on the exact same footprint. Though the land is the same, what's actually on will be just that bit different.

Vvardenfell was a much more verdant and hospitable place than 700 years in the past. There are more, and varied, areas than the region will have in the far future. Ashlands will make a return, as will the huge swamps. However, expanding on these areas are lush farmlands and beautifully scenic coastlines. Towering over the region will be Red Mountain, which you can always use as a point to direct yourself.

The best examples to give in difference are Vivec City and the aforementioned Red Mountain. Vivec City is still being built, but there will be familiar features. Baar Dau, the meteor that eventually becomes the Ministry of Truth, will be further away than what you're used to. Red Mountain is also in a much earlier stage of eruption than in the main title. However, both of these will play a major part in the new chapter of Elder Scrolls Online as the story progresses in Morrowind.

Vivec, one of the three Tribunal gods, plays a major part within the story. After coming down with a mysterious illness, he starts to weaken. As his powers wane, Baar Dau starts to float ever closer to Vivec City, eventually erupting into flames, and Red Mountain starts to grow more and more violent. Your job, aided by the returning Naryu Virian, is naturally to find a cure for Vivec. 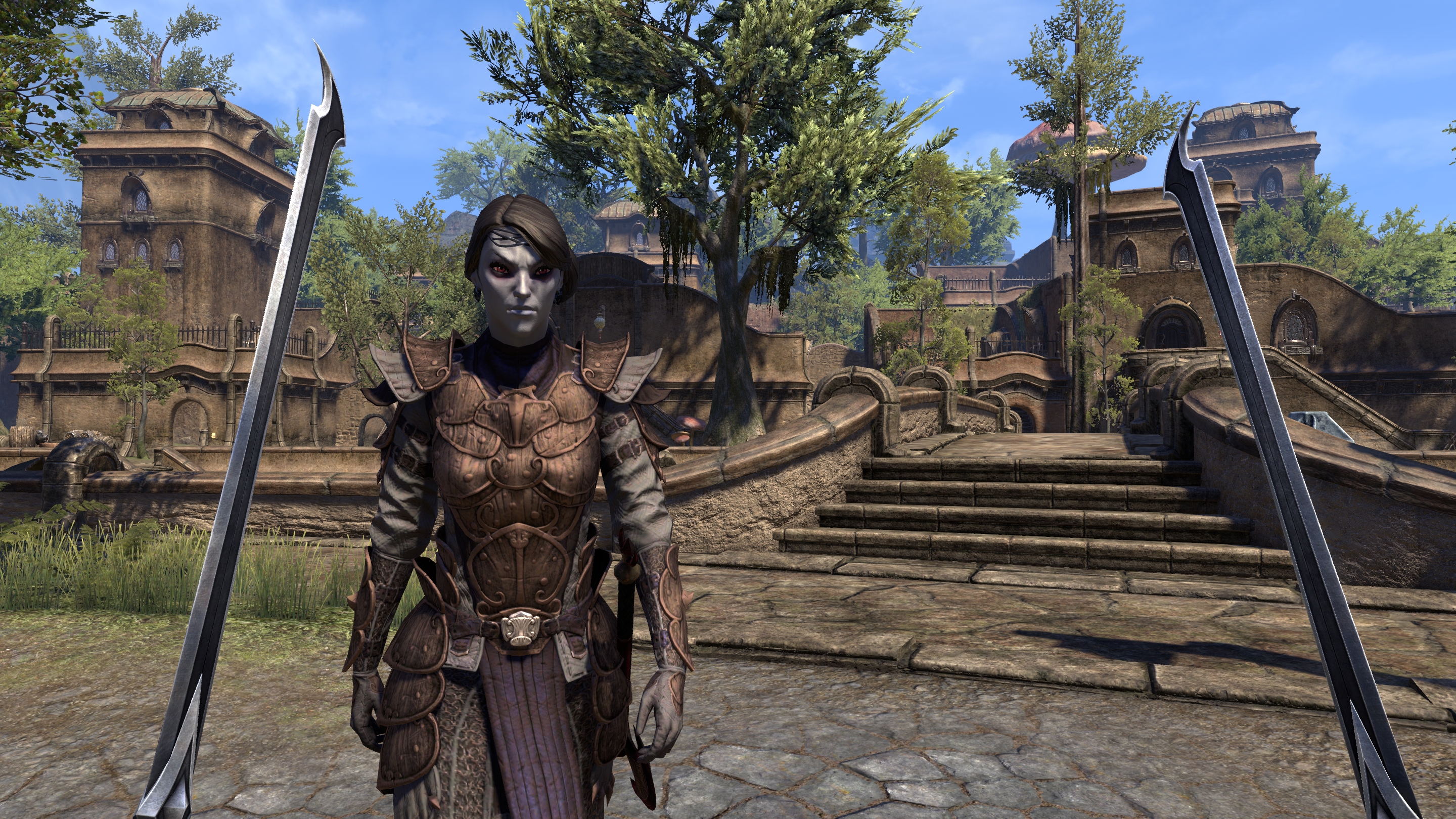 What will feature as a major part of the chapter is the factional warfare that plagues the region for centuries. Three Dunmer households; Telvanni, Dres and Redoran compete for dominance, using the Morag Tong, a faction of assassins, as a weapon against each other. Topping this off comes a nomadic faction, called the Ashlanders. You'll be able to interact and work with, for or against each and every one of these in your journeys.

Running through Vvardenfell should be a great experience for both new and old. Particularly as some major features make a return. Silt Striders will give you options for traveling. Levitation makes an albeit limited return. You'll head to places and meet ancestors of people who play a part in an unnamed hero 700 years down the line. Don't forget that a host of monsters, both new and old, will be there to torment you along the way.

As mentioned at the start of this piece, this new chapter is promising a host of content. The main storyline is joined by a host of side quests but also a major line which follows the ongoing conflict by the three aforementioned Dunmer households and the Morag Tong. All of the story within Morrowind follows the same continuity of the main game and features much more than just quests and stories.

One of the major new features comes the game's first hybrid class: The Warden. As the game's first new class since launch, there may be an inordinate expectation dropped on it, but there's a high chance it will meet any expectations. The Warden features three new skill lines, these being Winters Embrace, Green Balance and Animal Companion.

Winter's Embrace is a tank build that features a decent amount of self-buffing. Skills like Ice Fortress act as a barrier to protect you, while Polar Wind will damage enemies while also healing your party. Green Balance acts as the support chain, with Fungal Growth, Healing Seed or Living Vines letting you heal players across an area, or directly. Animal Companion seems to be the most interesting of the new lines. Giving you a bear companion is the most compelling feature, but other skills let you summon a host of monsters to harass your enemies, including cliff racers and swarms of bees. 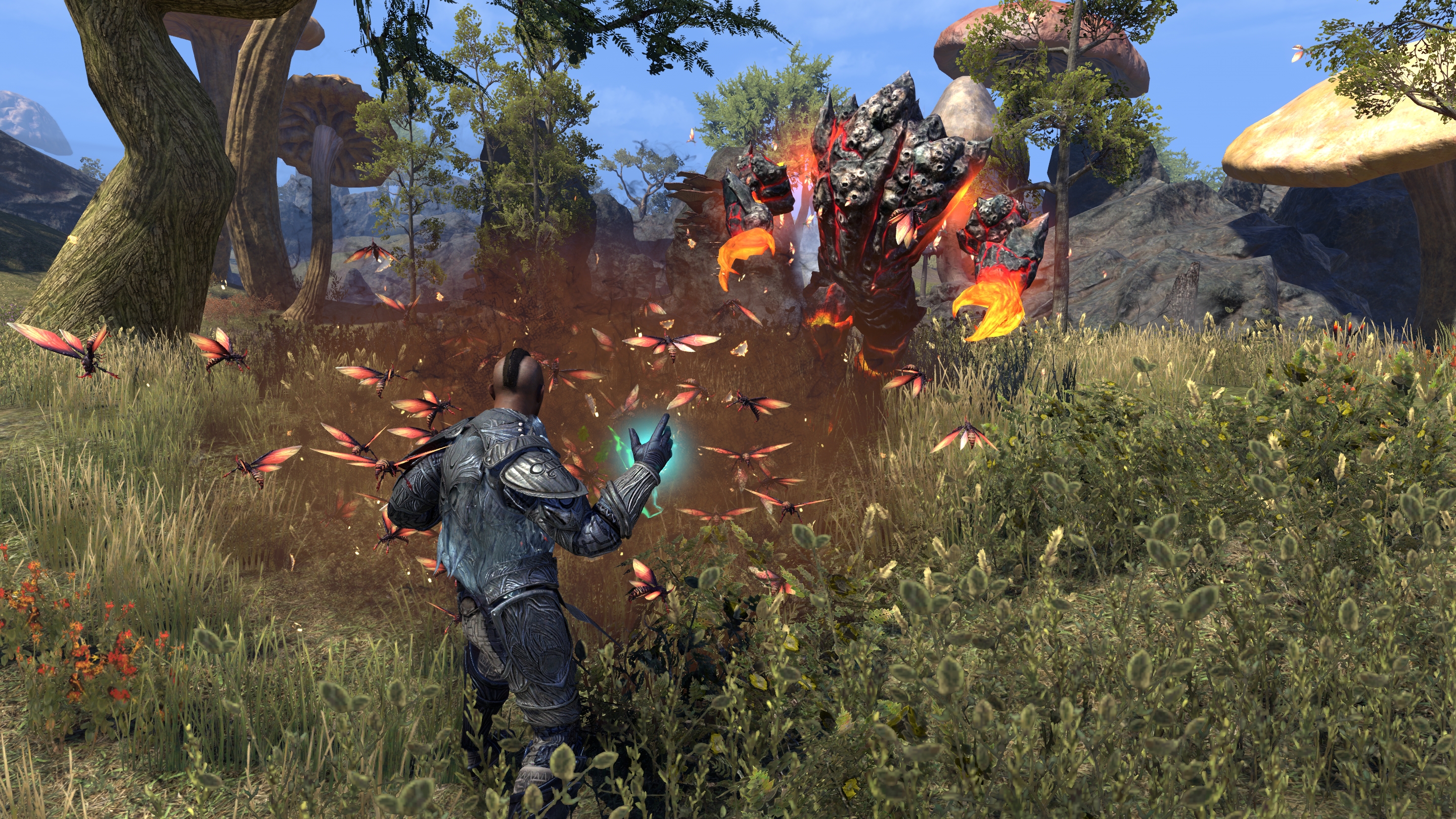 More than just a new class, the new chapter also features a brand new way to play PvP. The new battlegrounds mode features 4v4v4 combat in three different game types: capture the flag, team deathmatch and domination (point capture). This mode is designed to offer a quick, less time-consuming option for PvP. Rather than spending an extensive amount of time in Cyrodil, battlegrounds feature a fifteen-minute time limit. Following this design to offer quick action, the maps are small, with few areas to hide. With only three maps on offer at the moment, there is room for growth. Fortunately, fighting here also gains you alliance points which offers a huge incentive to play in addition to the huge wars in Cyrodil.

Adding to the new stories also comes a brand new Trial (raid in other MMO's) and two dungeons. The trial, The Halls of Fabrication, will see twelve players join Divayth Fyr (a character from TES: Morrowind) in Sotha Sil's Clockwork city. The highlight of this is a fight with a Dwemer Colossus, which is briefly shown in the new gameplay trailer. This is also the first new trial to be released since the Thieves Guild DLC.

Worth mentioning is that ZeniMax Online Studios are also planning two additional DLC's within 2017, following the release of Elder Scrolls Online: Morrowind. These will follow the same trend of previous DLC's, with free access for ESO Plus subscribers, or at a lower price than this new chapter.

With such a high support for the game, I can't help but reiterate what I said right at the start of this piece: Now's the perfect time to pay attention to what is now a stellar MMO. Elder Scrolls Online has moved from what was an average game, trying to take advantage of a series' fame to an absolutely fantastic game in its own right. 8.5 Million people have played the game since what was a rough launch, can we all be wrong?