The Division – New Info On ‘The Cleaners’ Faction

We have previously reported on some rumours that came from people who claimed to have tested an early Alpha-version of The Division, some of them which got confirmed in a podcast from the developers the same week, and we have reported on some gameplay being leaked. Now Ubisoft has released a news post over at The Division homepage giving us some juicy details about the faction 'The Cleaners' which can be seen in a CGI-trailer and a gameplay from last year.

Kill It With Fire! - The Cleaner Faction In The Division Wants To Burn Everything And Everyone That Might Be Infected

Creating a faction that can believably exist in the mid-crisis New York City that we’re creating is no mean feat. What is this faction’s motivation? Where did they come from? How will players interact with their story? The list of questions is almost endless but the work to breathe life into The Cleaners starts with but a simple, single flame; an idea.

Lead writer Meghan Watt said that "the idea of the Cleaners started to circulate two years ago." Meaning that they are a fairly 'new' addition I would assume.

“Generally speaking, the Narrative team wrote dozens of proposals for factions that they felt would arise from the sort of situation we’ve created in the game. The designers then grabbed a hold of what they thought would best suit the gameplay, and we started to iterate on a few of our favorite picks.”

The post touches on the subject of how they actually decide what is needed to be considered as a possible faction in The Division, and it would appear as the Cleaners fit the bill, since they are in fact in the game.

To be considered as a faction in The Division, this idea must tick many boxes, including:

- Is the faction plausible?

- Is the faction appealing? Is it cool/fun?

- Does the faction allow for a variety of gameplay mechanics?

- Does the faction fit with the theme and tone of the game?

"Once all of these questions are answered, the team can start making things happen."

The concept team that were responsible for putting together a representation of a human character from a jumbled white-board brainstorm-map thought about what kind of people actually exist in the real New York, and they ended up taking visual inspiration from garbage collectors. The lead concept artist Tom Garden said that "We are in a realistic setting where everything must be as grounded as possible"

“Silhouette, shape language and colours are the key factors for defining different archetypes. We are in a realistic setting where everything must be as grounded as possible, which leaves us very little to play with. Fantasy games can rely on the age old tropes of huge shoulder pads and horned helmets to distinguish their archetypes, we don’t have that luxury so we need to use what we have in a clever way that stays grounded but also reads very clearly to the player.”

Beauty is in the eye of the beholder, and how players interact with The Cleaners in the game is the slice of pie that truly matters. If reason or logic once existed in the goal and motivation of the faction, it has long since descended into a fanatic madness that sees only one solution to the pandemic; burn everything that moves to a cinder. Since this includes both innocent civilians and useful resources, their agenda is directly at odds with that of the Division.

It seems as if the Cleaners will be roaming around and pretty much burning anything they suspect is infected, due to not wanting to risk the infection spreading anymore than it already has, whereas what we know about the agents from the Division (you the player) implies that our goal is to keep the infection in check. By restoring services such as electricity, water, as well as trying to restore any resemblance of order and government agencies such as the Police. Level Design Director Victor Krengel said that "it's most likely that players will first encounter a roaming group of them [the Cleaners] whilst exploring Manhattan."

“It is most likely that players will first encounter a roaming group of them whilst exploring Manhattan. It’s a good move to ambush them while they tangle with another faction but often it’s best just to run.” Given that their weaponry is unique, the tactics needed to fight The Cleaners are much different to how you will handle other adversaries in the game. In close quarters, getting roasted probably isn’t going to be much fun!"

Victor Krengel mentioned that the environment will obviously have tell-tale signs that the Cleaners are on the way, or that they have already rolled through the area you are in. "This is an important job for our level design team; making sure that the logic of the world fits as it pertains to The Cleaners."

“When you start to see signs of the virus it’s likely the Cleaners won’t be too far away. As they get closer you’ll hear the rumble of their flame throwers and see the glow in the distance, especially at night. They leave a trail of fiery destruction everywhere they go so if you start seeing burnt out cars, charred bodies and cracked black tarmac you might want to change course.”

Lastly in the news post they mention that the Cleaners will in fact hold certain areas of the map, but they will as they have mentioned, roam around the map in an effort to try to keep the virus under control and eliminate any signs of it, this means that your engagements with them will wildly vary depending on how you encounter them. If you for example manage to come upon them fighting another faction you might be able to swiftly deal with them, but if you happen to bump into them turning a corner, you will most likely end up getting barbecued. 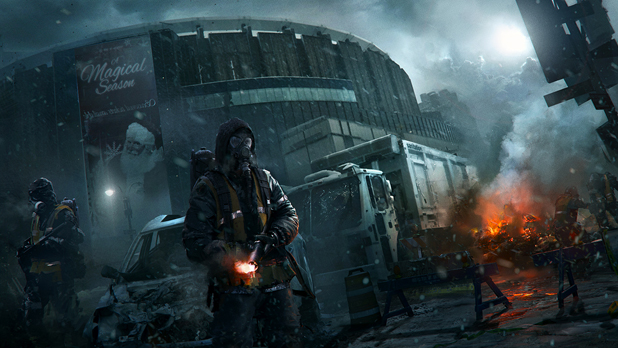 The Cleaners seem like an interesting faction, and I wonder if they will be present in the Dark Zones, which we now know will feature PVP and the rarest loot, however said loot will be contaminated by the virus and will need to be decontaminated in some manner before you can use it. If they are present there as well, and if they are indeed roaming around in the Dark Zones, this could in my opinion hopefully turn into some very interesting engagements, if you stumble upon a player-squad already facing a group of Cleaners, or if the Cleaners stumble upon your squad fighting against a squad of enemy players.

Below you will find the old CGI-trailer with the Cleaners, and if you wish to read the news post in full (which is pretty much covered above already) you can head over here.