The Division 2 Hits Stadia Next Week, Will be the Platform’s First Crossplay-Enabled Game

Stadia’s long major game drought will end next week when The Division 2 comes to the Google cloud gaming platform. It sounds like Ubisoft is going all out with this conversion, as it will include crossplay with PC (a first for Stadia) and Stream Connect support, which will let you view your teammates' gameplay on a single screen. In addition to The Division 2, Ubisoft will also be bringing The Crew 2 and Monopoly to Stadia in the future. Boy, I’m eager to see what the power of the cloud does for Monopoly! 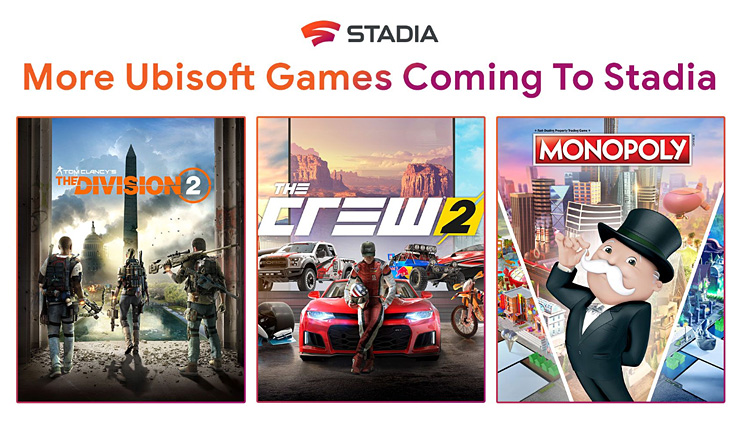 Here are Google’s official descriptions for the upcoming Ubisoft games:

Tom Clancy’s The Division 2 plus its new expansion – Warlords of New York – are coming to Stadia. Washington D.C. is on the brink of collapse, and all active Division agents are needed to save the city before it’s too late. Prepare to return to Manhattan on an intense manhunt to take down rogue agent Aaron Keener. Both cross-progression and cross-play with PC players will be available at launch.

Take on the American motorsports scene as you explore and dominate the land, air, and sea of the United States in one of the most exhilarating open worlds ever created in The Crew 2. With a wide variety of exotic cars, bikes, boats, and planes to choose from, experience the unbridled thrill and adrenaline-pumping excitement of competing across the entire US as you test your skills in a wide range of driving disciplines. Fame is yours to take!

You can now enjoy the game you know and love on 3 unique 3D living boards. Your city lives and evolves; invest in charming neighborhoods with strong unique personalities and watch them prosper in front of your eyes as you progress! Play the way you want by selecting one of the six official House Rules chosen by Monopoly fans from around the world.

Of course, March 20 also marks the release of Stadia’s most important release to date – Doom Eternal. Stadia recently surpassed 500,000 installs, but could they start surging toward the million mark next week? We shall see.