Team Fortress 2 to get “Meet The Pyro”, Second Annual Saxxy Awards and lots of Brand New Stuff in 2012 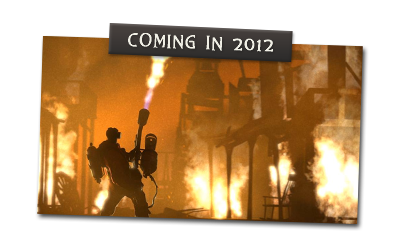 It has been announced over at the TF2 blog that there's lots of goodies incoming for Team Fortress 2 players this year including the much anticipated "Meet The Pyro" short, Second Annual Saxxy Awards and something Top Secret!

Team Fortress 2 is one of the best multiplayer FPS game out there with a huge community, Best part is that its Free to play and was listed in PCGamers top 10 Free PC Games at no1 spot.

In 2012, We would finally see the much awaited Meet the Team short of the lovable, indecipherable Pyro. The second Annual Saxxy awards would also be held this year where players compete to make a video belonging to a specific category such as "Best Kill" "Best Revenge" "Best Epic Fail" and the video with the most votes would award the player with a Saxton Hale themed trophy which when hit would turn an enemy player into a gold statue.

Other major additions include the Steam Workshop Blog where major news and announcements on the steam tf2 workshop are made. The steam workshop allows players to sculpt their own items and they can become an official in-game item if selected by Valve. Skyrim's creation kit would also allow people to make their own mods and put them over at the workshop for easier downloads and access to Skyrim mods.

A Secret TF2 Project has also been announced which is not a Hat or new Map. Hopefully we would know about it soon.