Bungie's upcoming blockbuster online open world first-person video game title, known as Destiny, is only about a couple of days away from its launch, and everyone is eager enough to check their pre-order statuses over and over just to make sure they are getting the game as soon as it launches this Tuesday. Destiny is coming to PlayStation as well as Xbox, but thanks to Sony's exclusivity deal with Activision, the game is more applauded on PlayStation consoles compared to Xbox. Shared below is a Reddit survey that shows that gamers won't upgrade to new-gen consoles just to play Destiny, but majority of the fans will play the game on Sony's PlayStation 4. 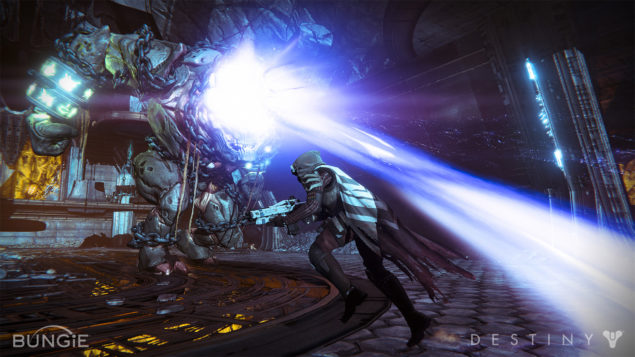 Practicing all of its inventive skills, Bungie has created an always online persistent world shooter video game title that packs much more than just its jaw-dropping massive in-game environments. There are only two more days left before we will be able to enroll ourselves in the group of guardians that serves to protect the last remaining city on Earth. The universe of Destiny is said to be "alive," this means that the in-game events that occur at different stages are not necessarily controlled or planned by the developer.

Destiny will land on all four major video game consoles, namely, PlayStation 4, PlayStation 3, Xbox One and Xbox 360, yet still it looks like the game is only coming to PlayStation platforms. This is due to the fact that Sony is closely working with Activision on the marketing campaign of Destiny and almost all the commercials boast PlayStation versions of the game. The developer is also offering exclusive game content to PlayStation players only, and so, Destiny is more popular among PlayStation 4 players compared to those who play on Microsoft's Xbox One console. 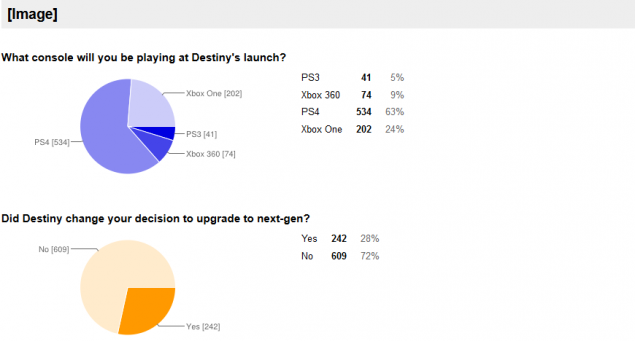 In a recent survey conducted among the active players on Reddit's Destiny community, it is clearly visible that the exclusivity deal between Sony and Activision is proving to be very much in favor of the former. Out of total, 63% players have claimed that they will be playing Destiny on their PlayStation 4 console and only 24% have voted for the Xbox One, although it looks like players are not such impressed by next-gen visuals of the game that they will upgrade to the latest consoles, as total 72% players voted that they won't go for PlayStation 4 or Xbox One just to play Destiny.

Besides this, the survey has also collected players' votes on several other inquests, such as what class and subclass will you prefer? which edition of the game will you buy and what will be your weapon of choice in PVP. For all questions and responses, you can check out the complete survey document here.