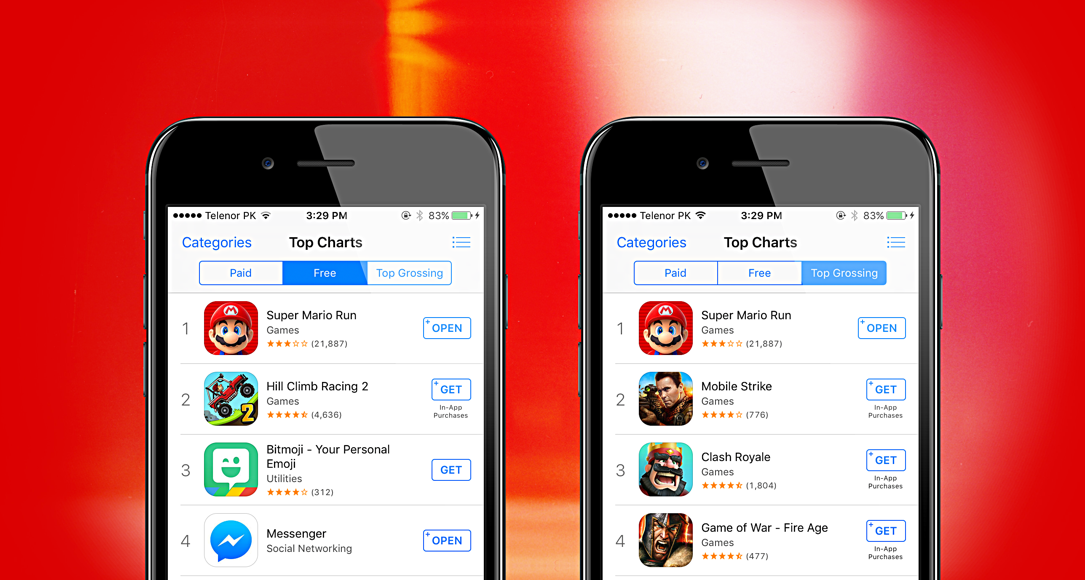 Just mere hours after its release, Super Mario Run is sitting at the top of App Store's Top Free and Highest Grossing charts.

There are a very few apps and games that manage to climb on top of charts mere hours after release. Pokemon GO was one title out of many, but Super Mario Run has managed to do the same. Nintendo's latest release has managed to climb straight to the top of two charts - Top Free and Top Grossing.

At the time of writing this, the game currently has a three-star rating along with over 21,000 reviews. That's a lot for a title that's not even 24 hours old. That number will likely go up in a drastic manner as soon as new updates to the game arrive.

Despite being a 'free' game to download, Super Mario Run requires a user to pony up $9.99 as an in-app purchase if you wish to completely unlock the title. If you don't do it, you will be limited to just three game worlds, that's it.

The game also requires a user to have a constant Internet connection at hand, otherwise it just won't work. That might be a huge let down for a lot of users, but apparently Nintendo has this requirement in place to combat piracy.

If you haven't played the game just yet, then it's a hot time to get onboard the hype bandwagon. Like I mentioned above, the game is absolutely free to download, but you have to part ways with a $9.99 in-app purchase in order to unlock everything. Simply tap on the link below to kick off the download instantly.

Given the game is already sitting on top of the Top Grossing list, it remains to be seen how much of a 'financial' effect it will have on Nintendo. It's way too early to speculate on anything, but the numbers are going to be very interesting once they are revealed by the gaming giant officially.

Till then, help Mario get the princess back.