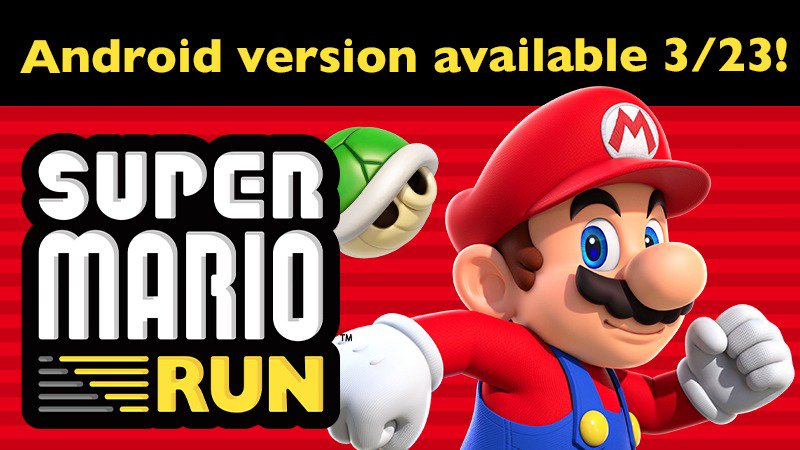 Nintendo has confirmed that Super Mario Run will be available to download for Android on March 23rd.

Previously, Nintendo revealed that its Super Mario Run game will be available to download for Android users in March. An exact date was not given at that time. However, the American arm of Nintendo has taken to its Twitter account to reveal that the game will be available to download on March 23rd. It also went on to suggest that the players should pre-register for the game right away.

Android version of #SuperMarioRun will be available on 3/23 with the Ver.2.0.0 update! Pre-register now: https://t.co/dAxzTlppnG pic.twitter.com/nQ0T4znOBt

Pre-registering the game is the obvious way to go as you will be notified instantly whenever the title goes live on Google Play. In fact, Nintendo took the same step while brining the game to iOS as well. But given how crowded servers are going to be on launch day, don't be surprised if you receive a push notification later than others. That's how things are these days.

It's also worth mentioning here that the game will land on Android with a big v2.0 update. At this point, it's unclear what the update will bring with it apart from an Android version. There is quite a possibility Nintendo will rejig things around and add more features to the roster. But of course, that's uncertain at this time.

Given how strict Nintendo is when it comes to piracy, I'm quite certain that the always-on Internet connection requirement will stay in place with the Android launch. Furthermore, new gamers can expect a one-handed gameplay experience that is tailor-made for mobile devices such as a smartphone.

Whenever Super Mario Run goes live for Android, we will let our users know about it. Till then, you might wanna head over to this link and pre-register for the game immediately.

The game kicked things off with a solid start on the iPhone and iPad. But eventually, things start to dwindle down rather rapidly, mainly due to the model which Nintendo has opted to go ahead with. For those who don't know yet - the game is absolutely free to download and try, with a $9.99 in-app purchase put in place for those who wish to unlock the complete experience and game modes.

Let's see how things pan out on Android.