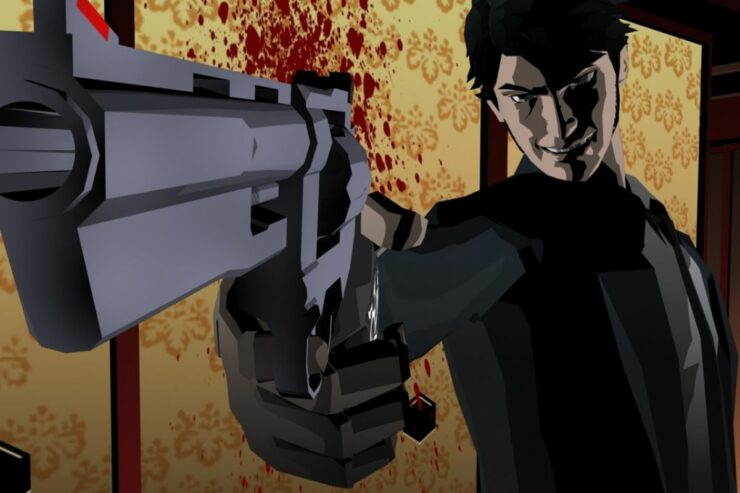 A surprise PC release for killer7, the cult classic made by Goichi Suda, Hiroyuki Kobayashi and Shinji Mikami, has been announced last night during MomoCon. killer7 will be available this Fall via Steam, thirteen years after its debut on GameCube and PlayStation 2, with NIS America as the publisher (CAPCOM originally published the game on consoles). Pricing hasn't been confirmed yet.

From the minds of iconoclast writer/director SUDA51 (Goichi Suda) and legendary directors Hiroyuki Kobayashi and Shinji Mikami, killer7 returns for the first time in over 13 years! From the renowned studio Grasshopper Manufacture, Ltd. comes a cult classic adventure game that cemented the studio's international fame and recognition.
Dive into a dark world of underground assassins in a tale of revenge as Harman Smith, a man who manifests 7 deadly personalities into the real world, known as the killer7. Take control of this distinct murderers' row as they hunt down the sinister Kun Lan, to stop his plan of world dominance, and end his organization of deadly suicide bombers known as "Heaven Smile."

killer7 chronicles the connection between two men whose intertwined path develop into a compelling tale of revenge and altering personas, propelling players into the consciousness of one man, Harman Smith and his seven different personalities.
Your goal: stop Heaven Smile, a group responsible for a wave of indiscriminate violence that is plaguing the world. Unique characters, complex story, and dark imagery presented with striking cel-shaded graphics are all the essential ingredients for this classic title.