Subnautica Coming to Xbox One Preview on April 1; Full Release to Ship on PS4, Too 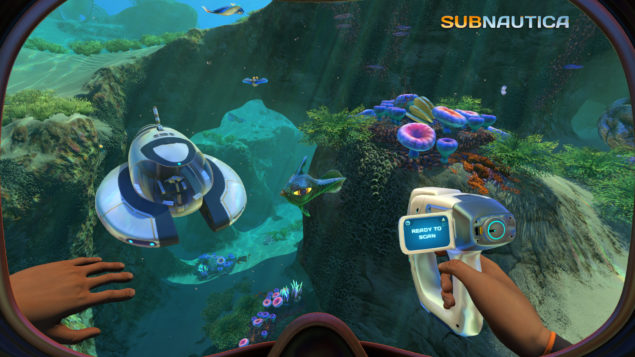 You might be familiar with Unknown Worlds Entertainment for their Natural Selection games, but Subnautica is a very different product. It's an open world, underwater exploration and adventure game released on Steam Early Access back in December 2014.

User reviews so far are extremely positive, with a 92% recommendation rate on over 11.5K reviews. Now, though, it's time for Subnautica to test new waters on console: Founder Charlie Cleveland confirmed that the game will debut on Xbox One's Game Preview program on April 1st.

PlayStation 4 gamers will have to wait since there's no such program for their platform yet, but the developers at Unknown Worlds are counting on a full launch on Sony's console once they get to version 1.0.

Lots of folks asking about @Subnautica on XB1: it will be launching on Preview soon. April 1st is the plan (no fool's).

@Daversity PS4 doesn't support "early access" so we can't ship there yet. Hopefully for v1.0 though.

Here's an overview on Subnautica's main features, in case you got interested while reading.

Dive Into a Vast Underwater World

After crash landing on an alien ocean world, the only way to go is down. Subnautica's oceans range from sun drenched shallow coral reefs to treacherous deep-sea trenches. Manage your oxygen supply as you explore Kelp Forests, plateaus, reefs, and winding cave systems. The water teems with life: Some of it helpful, much of it harmful.

After waking up in your Life Pod, the clock is ticking to find water, food, and to develop the equipment you need to explore. Collect resources from the ocean around you. Craft knives, lights, diving gear and personal water craft. Venture deeper and further form to find rarer resources, allowing you to craft more advanced items.

Build bases on the sea floor. Choose layouts and components, and manage hull-integrity as depth and pressure increase. Use your base to store resources, park vehicles, and replenish oxygen supplies as you explore the vast ocean.

The ocean teems with life: Use the ecosystem to help you. Lure and distract a threatening creature with a fresh fish, or simply swim as fast as you can to avoid gnashing jaws of roaming predators.

As the sun goes down, the predators come out. The ocean is unforgiving of those caught unawares in the darkness. Areas that are safe to explore during the day become treacherous at night, but also reveal a beauty that those who hide from the darkness will never see.

The Subnautica sea-floor is presented using a dynamic voxel terrain system. Dig caves to hide, store loot, or short-circuit cave systems. Impacts from vehicles, or even exploding creatures, will change the way the world looks.

Go Below The Deep

Cave systems wind below the sea bed, from dark claustrophobic passages to caverns lit by bio-luminescent life. Explore the world below the ocean floor, but watch your oxygen levels, and take care to avoid the threats lurking in the darkness.