Rather than unveiling the iPad Air 3 this year, Apple instead went one step further and revealed to the world the 9.7-inch iPad Pro, which, as the name suggests, is a scaled down version of its larger 12.9-inch screen toting brother. But, today we stumbled upon a new iPad Air 3 concept, which is everything the 9.7-inch iPad Pro should've been. In other words - it looks gorgeous! 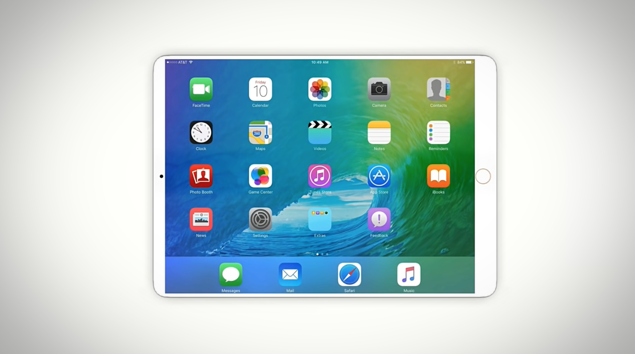 Rather than diving into the details itself, let's have a look at the concept first.

Now, the thing that made us fall in love with this concept is the fact that it looks as vanilla as possible, which is absolutely a good thing. It has no protruding camera lens, it features Apple Pencil support, has a 3D Touch display, something which is exclusively to the iPhone 6s, with things taken through the roof with 7000 Series Aluminum and added water resistance.

Must Check Out: This Stunning iPhone 7 Concept Is Based On All The Latest Leaks And Rumors – Video

And to make the deal even more sweeter, the iPad Air 3 concept is imagined with a Smart Connector, upgraded and faster Touch ID 2.0 sensor as well as a superior speaker system. In other words - the iPad Air 3 imagined here is a media beast for consuming content, while being as portable as possible.

The concept is also imagined with thinner bezels, making the overall footprint of tablet as small as possible. While there are imperfections in this design, such as the top bezel being thinner than the bottom one, but nonetheless, it looks gorgeous.

Given the current state of Apple's tablet lineup, it seems as though Apple is ready to phase out the iPad Air altogether in favor of the iPad Pro. But given the fact that the iPad Pro commands a higher price tag, it gives us hope that Apple might eventually come through with an iPad Air 3 later in the future. Maybe this year? It remains to be seen.

But will Apple make something like the concept above? We doubt it. After all, the company would want to reserve high end features for its Pro tablet lineup, and bringing massive upgrades to the Air lineup would mean that things would get cannibalized on the other side of the fence. But still, we can't stop imagining, and Apple has been known to surprise people in the past with hardware release. Maybe we'll get to see something similar released this year, or the next.

Will you buy the iPad Air 3 if it was made as the concept above? Do let us know about it in the comments section below.