RageQuite Corporation just released a new gameplay trailer that shows off some very impressive, and quite dizzying, in-game footage of the upcoming console version of Strike Vector EX.

Strike Vector EX is being updated fairly substantially for the consoles. On the surface they're optimizing the controls and adding full controller support. They're also updating to Unreal Engine 4, adding a nice increase in visual fidelity and speed.

RageQuit has also added a story-driven single player campaign for those that don't necessarily want to always play online, or whose Internet connection isn't necessarily the quickest for online play. One of the major complaints for Strike Vector when it released on PC was that the servers were slightly deserted due to it being new. In response to that a new AI system has been added to ensure that no one is truly playing alone. The AI is supposed to be life-like and not at all god-like omnipotent. 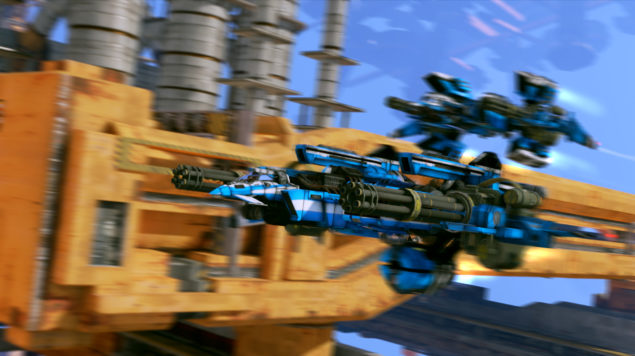 Powered by the Unreal Engine 4, Strike Vector EX is a competitive first-person aerial-combat game that hosts dizzying dogfights with battle-heavy aircraft. You'll have access to a tremendous amount of customizable mech-inspired ships, Strike Vector EX disrupts the air combat genre through a combination of precision mechanics, imaginative vehicle designs, and stunning, fast-paced multiplayer fights. Strike Vector EX is available on PC via Steam for $11.99 and is coming to PS4 and Xbox One this fall.