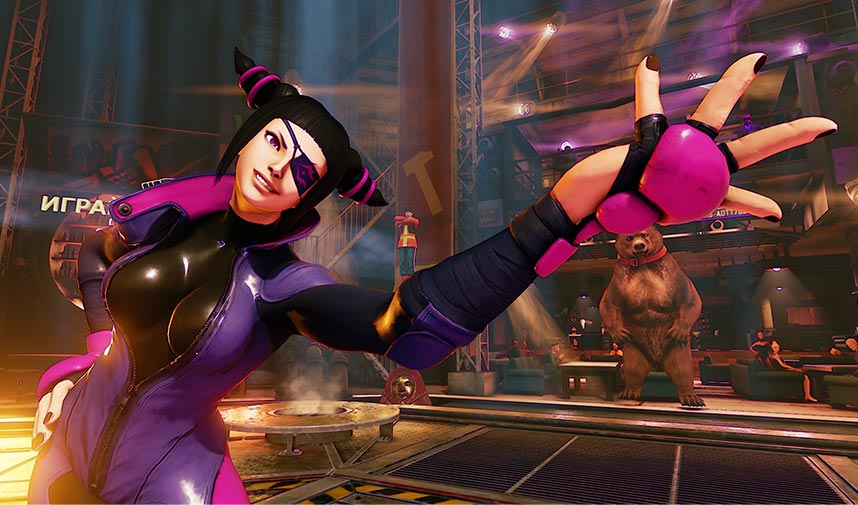 During yesterday's San Diego Comic-Con panel, Capcom confirmed that the next Street Fighter V DLC character, Juri, will be released next week on both PC and PlayStation 4. SDCC attendees are also able to try out the character, and details on the tweaks that have been made since her inclusion in the game's Cinematic Story Mode have been detailed.

Reddit user AlexMyerss shared a handy list of the character's features as well as a few off-screen gameplay videos. He also mentioned that the character does feel different than her Cinematic Story counterpart, with slower walk speed and improved anti-air attacks.

b.hk REALLY good for AA, can combo -> lk fireball or hk dp wheel kick if one hit of b.hk hits
Has a reversal with ex dp(kicks)
lk wheel kick dp is a good anti air like in sf4 from what I've seen
far f.mk overhead
zoning is only good in vtrig, does 2 hits. Regular lk fireball is good for meaty fb set ups
decent walk speed, normals are ok; she is a rushdown character 100%
she can pump out good damage off her loops
lk spinwheel is punishable if you get every hit blocked, can make it hit less times to make it safer
she can combo with her stored fb's with hk -> mk fb -> meaty lk fb. THEY ARE LIKE REKKAS, it's pretty awesome guys
you can adjust meaty lk fireball with dashes, like Nash's hp boom set ups
can vtrig off your loops, like last cr.mp -> lk spinwheel & vtrig -> b.hk mk stored fireball -> cr.mp lk tatsu
can lk tatsu as an ender -> super
f.hk, cr.mp, cr.mk, st.hp seem to be her best normals
cr.hp, s.lp, lk spin wheel, b.hk & ex dp are all good anti airs
spin wheel is now with dp motion
st.hp can hit confirm -> mk stored fireball, otherwise you can mash jab in between it and I believe is negative on block
st.mp is a good starter or st.hp if you can hit confirm

During yesterday's Street Fighter V panel, it's also been confirmed that more costumes will be coming soon to the game. Among these costumes are some brand new ones for Chun-Li designed by AKIMAN. Series producer Yoshinori Ono shared a few hours ago a higher quality image of the upcoming costumes, and you can check it out right below.