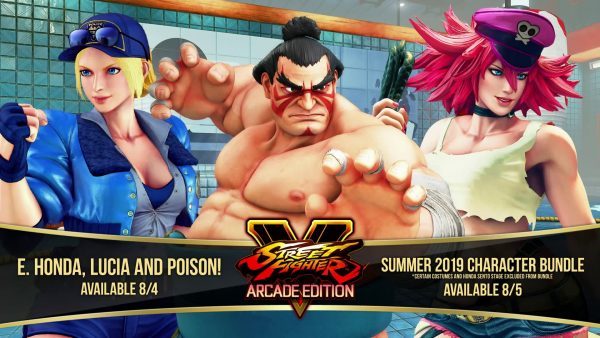 The three characters will release alongside a new stage for E.Honda and different costumes. While characters can be purchased separately, it will also be possible to purchase them together with the Summer 2019 Character Bundle.

Street Fighter V Arcade Edition has been released some time after the original game, and it includes some new play modes and a full-fledged arcade mode.

Even if you don’t love some of the ancillary modes, you should find plenty to keep you busy. Each playthrough of Arcade Mode will take up to half-an-hour, and Capcom does a good job of enticing you back. After two years of character updates, Street Fighter V had arguably found its niche. It wasn’t the big mainstream success Capcom had hoped to create, but it had its diehard fans. They could have tossed out a bare-bones Arcade Mode and got away with it, but, to the publisher’s credit, they went the extra mile. This truly feels like the fresh start Street Fighter V has been needing.

Street Fighter V Arcade Edition is now available on PC and PlayStation 4 in all regions.