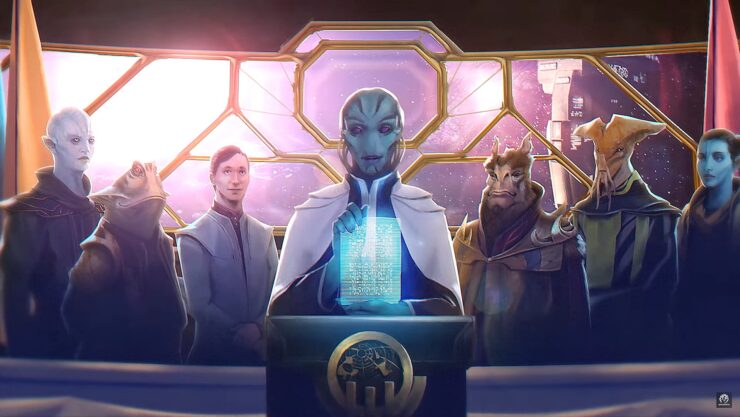 Federations, the latest expansion announced for the epic star empire simulator Stellaris, has a strong focus on diplomacy as the name itself might suggest. What it doesn’t say though, is the changes it makes to the early game as well.

Federations have existed in the game forever, but this update not only adds to them, and introduces new galactic bureaucracy, but also some new origins for your fledgling empire too. If you haven’t played Stellaris before, the diplomacy side of things tends to come into focus around halfway through the game, which on normal speed is quite a few hours. So to make this expansion more interesting for players that hang around in the early game, Federations also includes some things to spice up the first few hours before you even have to worry about other empires.

These early changes mainly focus on new origins, affecting your empire, and your home planet from the moment you start playing. An interesting example of this is the shattered ring. Ring worlds are incredibly advanced superstructures that players can find or build across the empire. But in this origin, you start on a broken one. The knowledge to build it has been lost, but you can work to repair it and reclaim the structure for yourself.

But by far the most interesting new origins is the doomed world. This starts you on a planet that’s about to go pop. You have 64 years to evacuate the planet before everyone and everything on it will die. It also explicitly warns you that you may not find other habitable worlds to colonise in time. When games of Stellaris can take dozens of hours, playing an origin that might knock you out of the galaxy in the few is quite exciting, but whether the community really take it is something else.

But then there are the federations and later game things the game adds. A number of different federations have been added to the game, meaning you can select and manage what type of alliance you want to have across the stars. On top of that, the Galactic Community is also being introduced and operates much like the UN or the World Congress from the Civ series. Here you can pass resolutions and try and change policy on a scale like never before. These diplomatic tools can also be used against you, so it's worth paying attention to your allies and enemies on the galactic floor.

On top of all these incredible new additions, Stellaris is also releasing a new race pack that is already out. This includes the Lithoids, creatures evolved from rocks. It's a sci-fi trope as old as time, but a really interesting addition to the game nonetheless. These creatures will be the first to come with unique race traits you can use when creating your empire, changing the way they consume resources or the way they colonise planets.

With so much information to process, we thought it might be easier to Game Designer Daniel Moregård about what this all means, and what’s next for the series.

Why focus on diplomacy with the Federations update?

Then it became the question of how. What type of diplomacy? We had talked topics to explore, like espionage, which we decided we wouldn’t do in Federations. Instead, we choose to focus on cooperation and the more collaborative parts of intergalactic diplomacy. So yeah, Federations and galactic unity were also two things we had mentioned we wanted to expand upon.

The GU is a lot like the UN, and like the UN you don’t have to listen to it, right?

The resolutions don’t directly force you to do anything, they don’t automatically change your policies or anything like that. What they will do is say you’re in breach of galactic law and obviously other galactic communities will dislike you for being in breach of the law.

It also opens you up to being denounced and if that happens people will dislike you even more.

And the lithoids, why rock people?

It's a big trope in sci-fi and one that a lot of people have been asking us for. It's also one of the big stereotypes we haven’t done yet. Let's say we’re doing something else, what would they be? Let's take some examples, like aquatic species, they would be different but are they falling into already existing categories.

Rock people are definitely something that hasn’t been done in the game yet.

Are the racial bonuses optional?

So they get access to four unique traits, one is the standard default trait and then you have three that are all a little different. But you don’t have to pick them.

Are you going to introduce any racial traits to the other categories?

I don’t know, because there's no necessity to add a unique trait for say humanoids and stuff like that. If we wanted to add some for say, plantoids that would make more sense. It might make more sense to add some for everyone but lithoids felt so different that they deserved something unique. We didn’t know when we were designing them if we would be able to add unique traits so we were very lucky we managed to do that over the summer.

Because everyone is gone to Sweden in July so those of us who were still in the office could do things like experimentation. So my game designer Steven worked on the lithoid thing over summer and manager to make them work.

Outside of lithoids, do you have an idea of any more races you want to add?

We have plenty more ideas, even if you don’t know exactly how we could do them right now. So we have rock people now that eat minerals, and regular people that eat food, so maybe we could have robots or gas creatures that consume energy or something like that.

We have a list of ideas of what we could do, but we don’t know what we’re going to go with next yet.

What stories do you want players to tell with the Federations expansion pack?

I’m hoping it’ll give them more opportunities to express themselves with certain playstyles for once. So, for example, I could be a fanatic materialist and I would like to found a research cooperative and use it to share technology with and this pack could help heighten that and the level of roleplay as well. So I’m hoping it will be taken as a level of expression like that. Just like declaring war or doing evil things can be used to express being in an evil empire. It just empowers more players to go with that sort of thing.

Crusader Kings III Announced at PDXCON, Due in 2020 on Steam and Xbox Game Pass for PC