No game makes exploring the stars as mind-blowingly fascinating as Stellaris. This 4X spacefaring game was first released in 2016 for PC and since then continued to evolve, refine, and improve itself. But finally, the galactic-sized strategy game is on consoles too, bringing the often overlooked genre to a whole new audience.

Fans of the series might be a little confused by the playstyle of Stellaris on console though. If you’ve been playing it for the last few years it might feel like a little strange on your PlayStation 4 or Xbox One. Not because the controls are wonky, they’re actually very good but we’ll get into them shortly, but because the console version is Stellaris from several iterations ago. Honestly, I needed a refresher as to how to play the 1.7 version of the game when I first loaded up. Most notably the Frontier starbases are back, which give you spheres of influence which was replaced by individual starbases in later updates. The other big change, or rechange perhaps, concerns resources. While this is a fairly recent tweak, the console resource panel doesn’t have alloys or consumer goods. It's quite literally the same old Stellaris that you knew and loved, but whether you can stomach these changes is up to you. I will say that Stellaris, for all of its size and scope, is surprisingly small on your hard drive, coming in at under 10 GB.

For those of you that didn’t understand much about the previous paragraph, let me catch you up. Stellaris is a spacefaring 4X game (eXplore, eXpand, eXploit, eXterminate) that allows players to create their own race and government before taking to the stars to create a galaxy-spanning stellar empire. Players have to manage resources, government factions, colonies, research, and armies as they expand across the stars, not to mention the other races and government they will find along the way. It’s a lot to take in, but the game is a bit more expansive than that one sentence. In fact, Stellaris is a fairly slow-paced game, giving players the room to explore their options with very few consequences, at least at the early stages of a campaign. 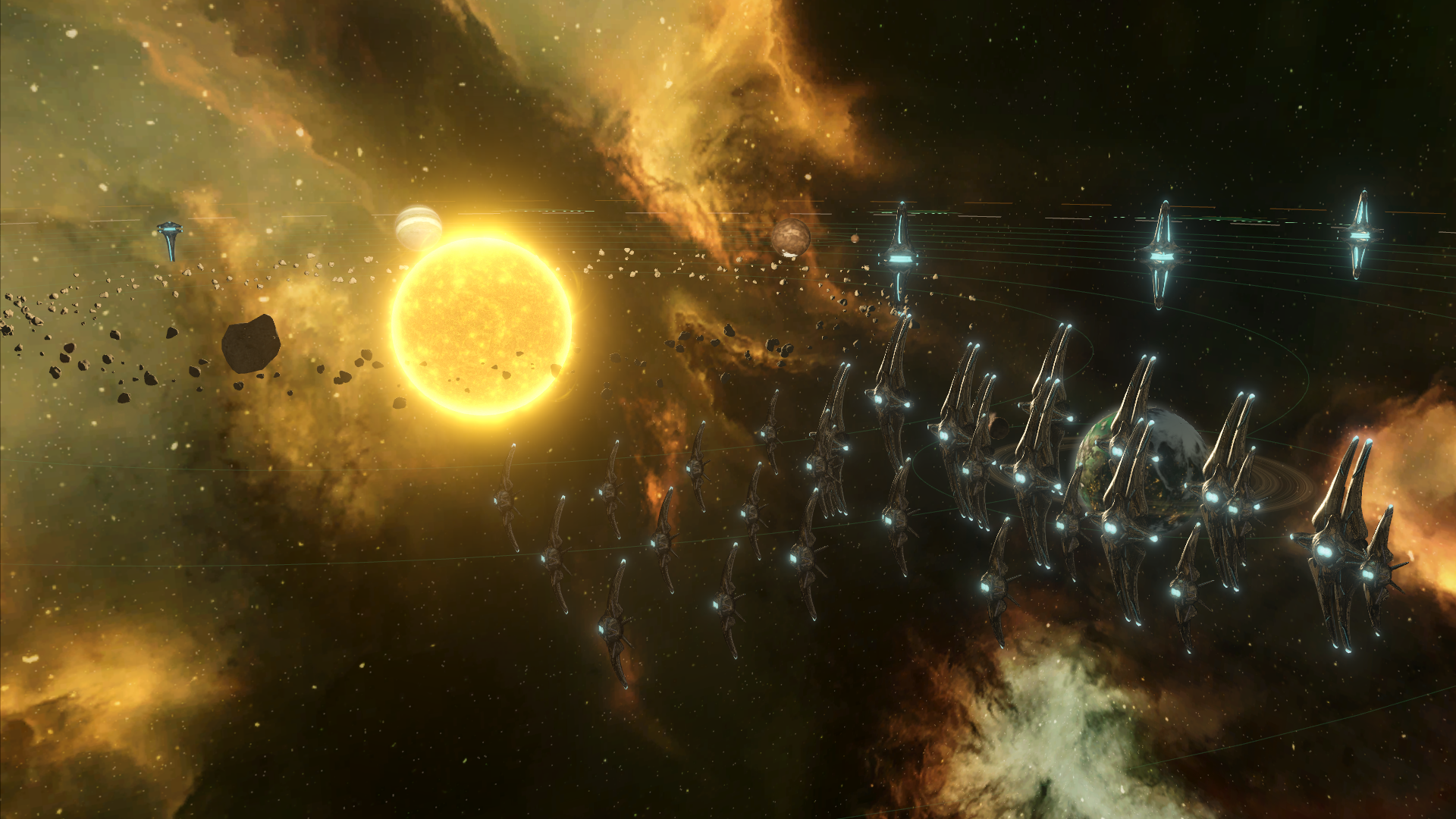 And the early stages (explore and expand, respectively) are my favorite in Stellaris. While there is plenty of nitty-gritty diplomacy to be found when your borders start rubbing up with other empires, the discovery part of Stellaris is always the most exciting for me. Before you can claim a star as your own, you have to survey the system with a science ship. Here you government finds out about the resources found in each planet, moon, and star, as well as any anomalies that might be lurking. A lot of the stories in Stellaris are told through pop-up text boxes and anomalies are no different, giving you the chance to research something that doesn’t quite make sense. The stories that come out of these anomalies are very varied and always interesting, offering some great examples of the creative storytelling behind the scenes in Stellaris. Even after hundreds of hours with the game you have the chance to discover new tales of the unexpected. One example is the remnants of an ancient robotic race that wanted to destroy all humans. Another is a lone tree circling a star, protected by mysterious aliens. One of my personal favorites is a multi-tiered story about messages to your citizens coming from a black hole.

When not found in the inky black, these stories are most often found on your colonies. It's not always easy to find a habitable planet, depending on your races preferred world, but as your people start to work on alien dirt they can uncover all kinds of interesting tales. One example I came across as a race of peaceful environmentalist fox people was an old terraforming machine. The moon I had colonized wasn’t particularly pleasant, so I figured it wouldn’t hurt to turn the old machine back on. Of course, I was very, very wrong. It turns out whoever built the old machine breathed poison, and the machine went to quick work replacing the entire atmosphere with the stuff, killing the entire population as soon as it reactivated. When you aren’t committing small acts of genocide, planets have to be managed by building up the population and infrastructure to best support your empire.

For a lot of players, the most important part of your empire is your army. Players can build massive fleets of planet-destroying vessels to overcome their probably peaceful neighbors, and Stellaris makes sure to get this section right. For players like me, where the armies are a last and frequently fruitless option, fleets can be managed with a few clicks. For players that really want to get involved, the game lets you edit your ships manually, creating the most unique and devastating weapons of war known to whatever you are playing as. Combat itself is mostly just pointing your fleet at the enemy and watching the fireworks. But if you are managing a bunch of fleets, you can coordinate pincer movements and flanks. 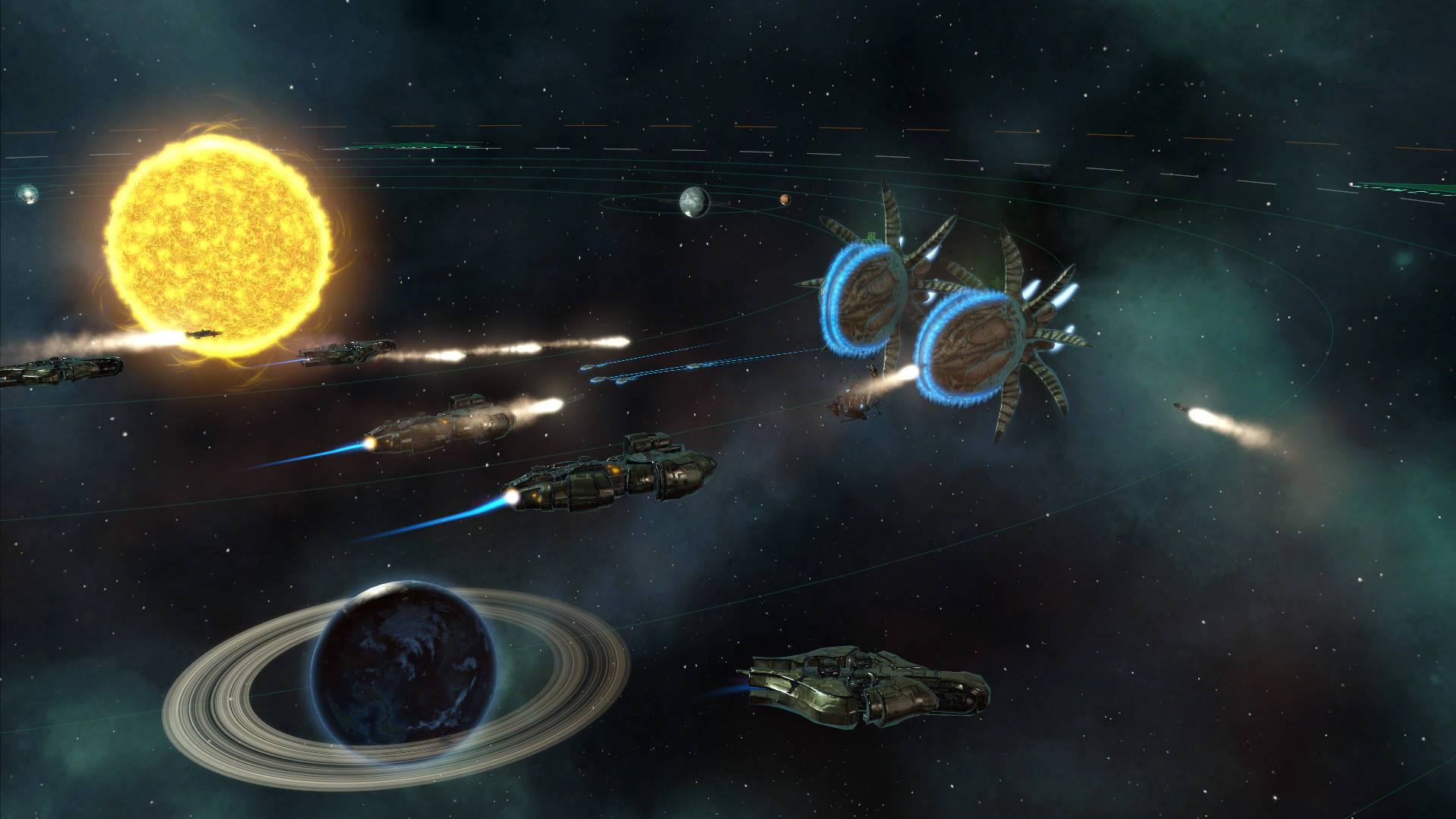 And like I said earlier, the controls are surprisingly good for a game with so much micromanagement on consoles. Essentially, the game divides itself into four different menus and assigns each direction on the d-pad to one of them. While its surprisingly hard to explain what each of the categories are on paper, it feels very easy to get to grips with the controls and start swapping between menus with speed and ease. You can pause the game at any time as well if you need a minute to plan your next move, and the game thankfully does it automatically when a text screen pops up.

There is not a great deal to look at in Stellaris, with most of space being empty and all, but the soundtrack is literally out of this world. In my mind, this would be a great game to play as you listen to a podcast or have Netflix open on another screen but in practice, I am completely enraptured by the music and need nothing else to distract my ears.

If you are a strategy gamer somehow shackled to a console, know that Stellaris is an amazing game. Even if you aren’t an expert in the genre the game is gentle enough to begin with to allow you to experiment with its many mechanics. From the very beginning when you get to create your own spacefaring empire to the moment it conquers the stars, Stellaris will have exciting stories and surprises in store.

Reviewed on PlayStation 4 (code provided by the publisher). You can purchase the game for Xbox One via Microsoft Store.

While it's more than a little weird to play such an outdated version of the game, Stellaris is always an interesting and deep, not to mention surprising, 4X game to pick up. In addition to that, it doesn't have much of a competition on consoles.