Star Wars Battlefront To Have A Lot More Guns In Final Release, But No VOIP

The Star Wars Battlefront beta will close up in just a few hours, precisely at 8AM PST, 11AM EST, 4PM BST and 5PM CEST, so there's a little time to throw in a few more matches. 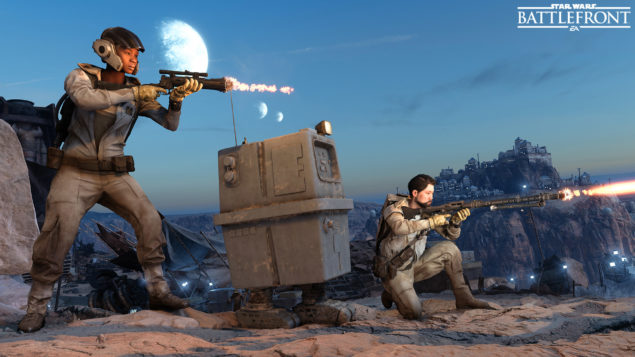 One of the most common complaints users had with the beta is that there was a very limited amount of guns, specifically just four. Community Manager Sledgehammer70 confirmed on Twitter that there will be "a heck of a lot more in the final release", though, so no need to worry about that; the screenshot above already confirms the EE-3 carbine rifle (held by the female Rebel fighter), which Star Wars fans know because it's the one used by Boba Fett.

@Ejderha_life The Beta only has 4 guns, the final game a heck of a lot more.

Still, don't expect a similar amount to Battlefield or even something like gun customization, since these aspects are quite limited within the Star Wars universe. In case you want to know more about the technical details of the guns (blasters, actually) such as maximum and minimum damage, drop off, rounds per minute and delay between shots, check out this document prepared by Reddit's VoiD_Glitch.

It has also been confirmed by the official Star Wars Battlefront account on Twitter that there will be just four maps available for the Walker Assault mode, one for each planet (Hoth, Tattooine, Sullust and Endor).

@Ninami2525 There will be one map on each of the four planets that support Walker Assault.

While there will be a fifth map for Jakku releasing just a couple weeks after the launch of Star Wars Battlefront, this does seem quite low for those only interested in Walker Assault or Supremacy (which, given the same player count, will probably use a very similar version of the map). Battlefield 4 shipped with 10 maps and all of them were available in Conquest mode; Star Wars Battlefront will ship with 12 maps (not counting the free Battle of Jakku DLC), but it seems like there will be four large ones, four small ones and possibly four air ones for Fighter Squadron. Let's hope that DICE clears this up before launch.

Also, in case you were hoping that the developer would add a VOIP system to the game, this isn't happening - DICE is recommending the use of third party programs for this regard.

Of course, there are plenty of programs to choose from on PC and console gamers may use the integrated PlayStation 4 and/or Xbox One party systems, but it still seems odd since Battlefield 4 had an in-game VOIP system for squad members.

In case you missed it, the Star Wars Battlefront season pass was announced yesterday along three other modes: Hero Hunt, Cargo and Droid Run. The game launches on November 17 in North America and November 20 in Europe.