The Star Wars Battlefront file size has been revealed for PC, PS4 & Xbox One. The PC version of the shooter weighs in the heaviest, while the Xbox One version is the smallest. 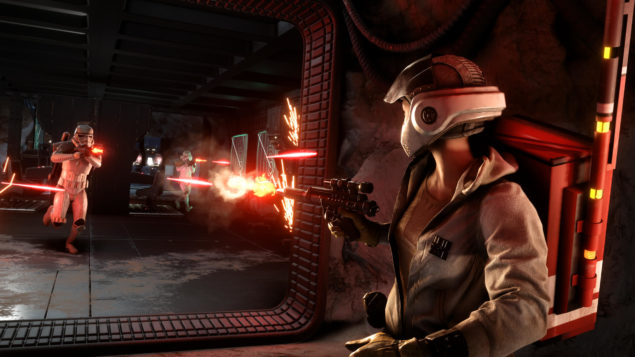 The PS Store has long listed DICE's shooter with a minimum file size of 25GB, but this merely appeared to be a placeholder size. The actual size of the game on PS4 isn't too far off though, as the official EA Star Wars Twitter account just tweeted the game's size on Sony's console - 23GB.

@cristianvaca_ Star Wars Battlefront will be a 23GB download on PS4, 19GB on Xbox One and 27GB on Origin.

Looks amazing on all platforms

PC owners will have a somewhat larger download - on Origin, Battlefront will weigh in at 27GB. On Xbox One, the shooter fills up 19GB of hard drive space.  File sizes probably differ because of resolution differences between the platforms, with the PC version offering the most graphical quality. All versions of the game, offer amazing visuals and performance though. According Eurogamer's Digital Foundry, Battlefront is the best looking game the Frostbite 3 Engine has yet produced. Although Certain aspects of its technology seem to have been pared back compared to DICE’s Battlefield line. It may well be that compromises are made for the benefit of console development:

“streamlining the experience to cater for platforms where physics-based action tended to buckle performance in previous games. When considering the PS4 and Xbox One’s prospects here, the frame-rates on PC so far are promising”

The file sizes are modest, but Battlefront is mostly a multiplayer title with a few single player missions, and doesn't include a true single player campaign mode. Taking this into account, the game's file size is in line with recently released titles.

Battlefront launches in 6 days for PC, Xbox One and PS4. Subscribers to EA's 'EA Access' on Xbox One however, are able to enjoy the game tomorrow.