Remember a few days ago there were rumors of a new Star Wars game being announced with the only hint being "CT - 1313" and I had the anticipation and hopes of this being another Bounty Hunter centric title? turns out I was right but even more so the game is said to have a Mature theme meaning the game will not have the same rating as Lego Star Wars ; ). While the game still hasn't had more details around it regarding platforms, release date or such it seems that Boba Fett is indeed the protagonist and he has to use an "Exotic line of weaponry" to find out the truth behind a criminal conspiracy. 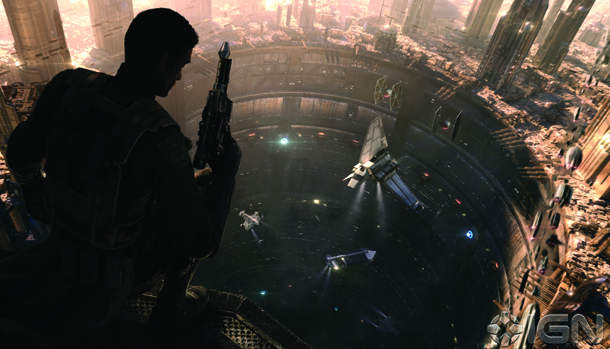 Star Wars: Bounty Hunter was indeed a very underestimated title in the previous generation consoles and showed us more story regarding Jango Fett than any of the Star Wars Movies or Games ever could, but now it seems that it's time for his son; Boba Fett to step into the same spot light. While the game is showing up to be more of a cover shooter and a platformer it seems that the game will indeed have a good story to back it up as you traverse through a densely populated planet of Coruscant chasing down various targets and seeking bounty or information from them.

While a game play video is absent it seems we will have to wait till E3 for some game play and information to fill the gap for now its good to hear that a new Bounty Hunter game is indeed real and I look forward to playing it when it does release.