Star Citizen ‘Star Marine’ Module Shown Off at Gamescom 2015, Looks to be Coming Along Nicely

The FPS module was also shown off by Chris Robert and the rest of Cloud Imperium Games. They wanted to highlight what they've been working on, how far they've come and show us a little bit of what it looks like to actually play it. 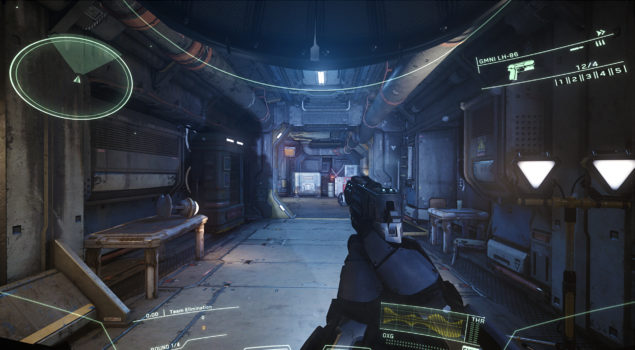 Star Marine is making headway and looks quite good in action.

The philosophy for release of Star Marine is different from how they handled the release of the Arena Commander module. They feel that it needs to be in a far more complete mode in order to actually be fun for as many different individuals as possible. That hasn't quite sat well with a lot of people, however.

There is still a lot to do, though plenty has been done to at least make for a playable alpha. Chris Roberts and Cloud Imperium Games showed off a great demo of what it's going to be like, including how seamless each of the different stances will be despite being a complex sounding system.

The FPS mode itself looks just as fast paced as we'd expect, the movement from aiming to running being a very smooth transition. The weapon effects were all well done, as were the sound effects, though of course there were some placeholder textures in a few spots as can be expected. Overall it looked quite good. The feel seems to be different, as promised, and they showed us a variety of different weapons and other equipment.

There is work to be done, however, in the ragdoll physics department as well as in polishing things up for the alpha crowd. Regardless, Star Marine isn't being ignored and certainly isn't being delayed indefinitely. It's just not quite ready for prime time, and I think that they recognize how critical people are going to be if they're able to play an FPS module of the game as it opens a far wider audience. Thus I believe that they really want to get this right, and are more than willing to delay it until they deem it finished enough to be a playable alpha for us to enjoy.

And the gameplay recorded from the life demonstration itself.