Star Citizen update 1.3 has been available for a few days now and is what Cloud Imperium Games is calling their first 'post merge' patch. There are many changes that have made their way into it, most notably  new area in ArcCorp has been added that you can explore, buggies are available to drive and crash into walls (and other people) and you'll find some general performance tweaking among the balancing of weapons and improvement of the UI. And if you want, you can explore your ship whilst in flight, just don't expect the local physics model to be quite complete yet.

But Star Citizen isn't nearly optimized as of yet and certainly isn't going to be optimized for performance for some time. The focus right now is on the next major alpha update, Star Citizen 2.0, completing the FPS module, Star Marine and in finishing up production on Squadron 42. But with 1.3 there seems to be some improvements in performance that seem to have smoothed out the experience providing a far more stable framerate throughout. So let's take a look at how it performs and looks now that Star Citizen 1.3 is out in the wild.

CryEngine is a very complex and visually stunning engine on it's own, and the latest version, 3.8.5, is perhaps even more so, in part due to the work that Cloud Imperium Games has done to improve upon some of the underlying features and code-base. Those improvements that have actually made their way into CryEngine itself even. This means that at the moment, due to not being a finalized engine (with many more underlying tweaks being made and even textures and art being improved frequently, and not being final), it's a resource hungry game at the moment that may require quite the system to run smoothly.

For this test I took two systems, one from AMD and one from Intel and ran through a small pre-defined loop in both the hanger and in ArcCorps, the social area area. ArcCorp especially is incredibly demanding on any graphics card that you might have due to the great use of all manner of graphical effects and the incredibly high poly-count models used for people, ships overhead and the buildings.  Only 1080P and 1440P are ran due to 4K not necessarily being the smoothest experience as of yet. Those two resolutions are the most playable as of right now. Also, Arena Commander was not tested because it generally performs better than the other modes due to the reduced scene complexity.

And a big thank you to ASRock for providing the Z170 Extreme 4 for use in our test bench.

For all tests at both resolutions on both systems the graphics quality was set to Very High.

For the walk around the hanger, the benchmarks starts at the spawn point, continues straight forward until I come to my ship, I turn left and walk through the next hanger entirely, then turn around. It's simple and fits nearly the entire representation of the hanger in the benchmark, meaning a lot of different elements have to be rendered.

But let's get to the test already! How does this incremental update actually perform?

It's no surprise really that the lower tiered cards don't provide a fast experience at 1440P, though what's surprising is the near parity that was found with all of the top tiered cards. That could be due to the relative optimized state of the alpha thus far, or it could be that it's somewhat CPU limited, with the Titan X and even the Fury not really able to breath and not being fed information quite as fast as they could otherwise.

Let's take a look at how this system performs at 1080P.

The performance gap seems to be very similar between AMD and NVIDIA just as it was at 1440P. In other, much better optimized though older, CryEngine games such as Crysis 3 seem to have a distinct performance gap between AMD's Fiji and the current iteration of big Maxwell. But this isn't optimized in the slightest, and being an alpha build, performance could be different between mine and even a similar setup.

Now that ArcCorp has been added to and is a bit more stable a location, we'll also look at how everything performs with a quick walkthrough. For the benchmark, I start in the elevator where you arrive from your hanger, walk out and stand in-front of the magnificent structure just outside of the building you enter from. I then look left, then right, then repeat that while looking 45 degrees higher. This should challenge the system quite well, though I'm sure running around through the alleyways can be difficult as well.

With the increased poly-count of the buildings and all the other plethora of objects now being rendered that weren't in the hanger, the performance takes a noticeable dip, though not necessarily by too much here either.

Earlier this year we showed that even a Core i3-4150T and a custom NVIDIA GTX 860M is capable of running Star Citizen, though not necessarily competently or even that well. But it did maintain a relatively stable framerate that was doable at 1080P. But now we look at a budget-oriented PC surrounding an AMD processor with 4 Steamroller cores running the show.

AMD's Steamroller base Athlon X4 860K is not considered to be a very potent CPU despite operating at a decent clockspeed and offering slightly improved IPC performance than the current FX processors. Perhaps it's because it doesn't quite overclock nearly as well, so seems to lag behind even those Piledriver based monsters that are still capable of some impressive feats if you can reach over 4.5GHz. This of course is at the cost of power efficiency. We've tested this system to see if a lower-end system is actually capable of providing a good and playable experience in Star Citizen as of right now.

So how does the Athlon X4 do with with Star Citizen? Fairly well given the IPC disadvantages compared to Skylake. 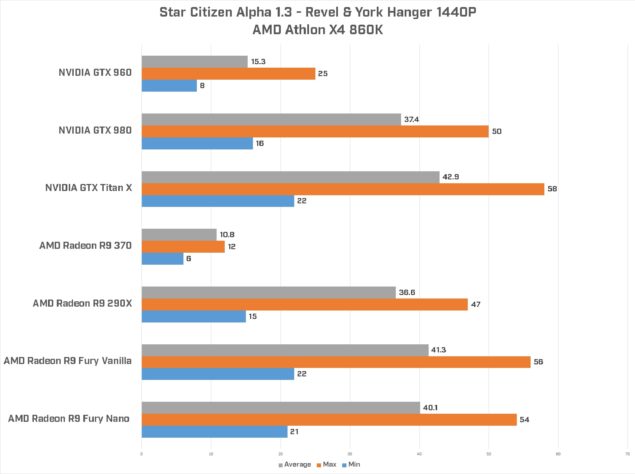 With this, the lower-end aren't able to do very much it seems, with the R9 370 barely running at all. It was a very slow slideshow even in the hanger. Aside from that the story of parity seems to continue among the higher end GPU's, though this time with slightly less performance. It's actually quite surprising that this CPU is capable of this level of performance. The parity here is also likely explained by the un-optimized state of the game and the fact that it's certainly now CPU limited.

1080P in the hanger is a mostly similar story, though now it's at least bearable with the R9 370. But let's take a look at ArcCorp to see how a more complex scene fares.

Not horrible, slightly lower than the hanger, but it seems that the Athlon X4 is a capable processor if one is looking to run the game at an acceptable level. It isn't going to blow you away, and you'll be hard pressed to come up to the 60FPS limit, though it's likely that unless you're in need of the absolute best hardware, this'll do just nicely.

These results will differ from yours, probably even wildly at this point because Star Citizen isn't even close to being actually optimized for performance yet. Final assets aren't even in place for everything as even some ships are undergoing redesigns. You can't even fully adjust graphics options aside from the usual CryEngine default global setting. We can see that both the systems tested are quite capable at running it and providing a good experience. Would you pair a Titan X or even a Fury Nano with an Athlon X4 860K? Probably not, but even a lowly GTX 960 is giving a good showing, and with lower settings it could do even better. So it's an incomplete game with performance that isn't indicative of how it'll actually do when it's closer to being finished. It still runs pretty smooth up to this point.

But it's still a beautiful verse out there and though it's not optimized in the slightest, it's possible to run it on a wide variety of hardware and experience acceptable results. Thus far it also seems to run well on both top-tier cards from AMD and NVIDIA, not really "favoring" either. It seems that GameWorks was supposed to be a part of Star Citizen at some point, as was shown at a presentation by NVIDIA at their GameWorks reveal in Montreal in 2013, though that hasn't seemed to have materialized yet. Perhaps internally using AMD cards (as was mentioned at the 2015 Gamescom Star Citizen presentation during the giveaway by Chris Roberts) has contributed to some internal shift in strategy. Either way, not having vender-specific technology is a good thing for everyone.

Star Citizen can perform well enough on just about any piece of hardware, provided you use the right settings, and will likely be as scalable as any CryEngine based game. If it's capable running like this in a not so great state, then perhaps a more finalized product, such as alpha 2.0, and DirectX 12 could boost that performance even more.

Of course when Star Citizen alpha 2.0 is released, we'll benchmark that too and see just how much things have improved from there.