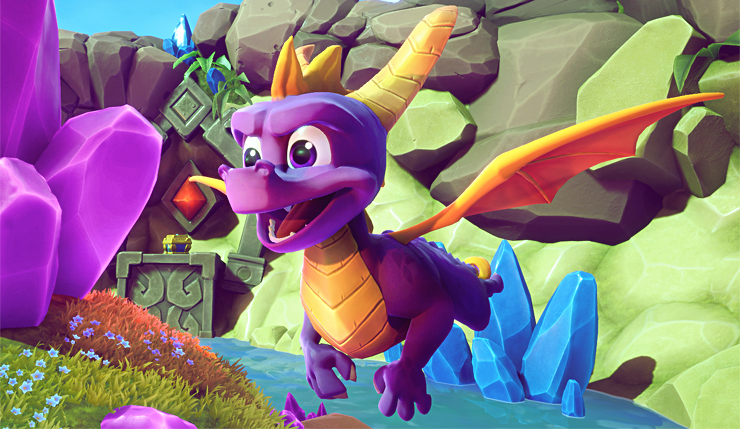 Spyro Reignited Trilogy doesn’t just look great, it sounds great, featuring a redone soundtrack that changes dynamically when Spyro faces bosses and other challenges. But hey, maybe you want to groove out to the old Spyro tunes? No problem! At the “Spyro: Reigniting a Legend” San Diego Comic-Con panel, it was revealed players will be able to seamlessly switch between the original and new “Reignited” Spyro soundtracks. You can have a listen to a quick comparison between the new and old music, below.

It was also revealed original Spyro composer Stewart Copeland has returned to create some all-new music for Spyro Reignited Trilogy. Check out a snippet of the game’s new main theme...

Classic stuff! I have to say, I miss the days when games all had full original soundtracks, rather than the bland “atmospheric” music that dominates most games today. All the great game composers like Copeland are still out there – give them more work, please!

“I’m calling it – Spyro Reignited Trilogy looks to be shaping up to be even better than Crash N. Sane Trilogy. Of course, some of that can be chalked up to the source material being superior. Okay, okay, that’s subjective, but there’s no denying that classic Spyro is a bit more open, more modern-feeling, than Crash. Those who found N. Sane Trilogy a bit too punishing should feel more at home here. Spyro Reignited Trilogy delivers plenty of warm, toasty nostalgia, but it isn’t just for old-school fans. Anybody looking for a light, fun, accessible, and absolutely gorgeous platformer should be fired up about this one.”

Spyro Reignited Trilogy glides onto Xbox One and PS4 on September 21. The game is likely coming to PC and Nintendo Switch as well.