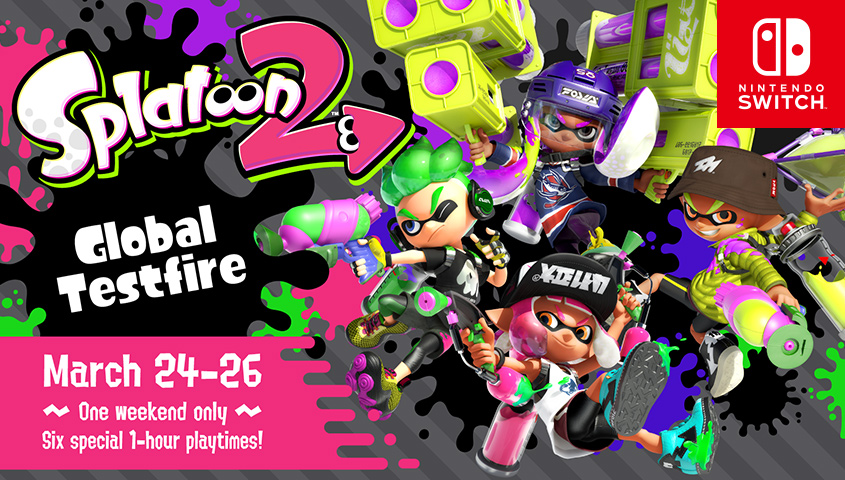 Splatoon 2 is getting a free ‘global testfire event’ for those who purchase the Nintendo Switch. In addition, a new LAN mode and spectator view will be introduced.

The free Splatoon 2 preview will be available for those who purchase the Switch platform and will allow players to battle against opponents around the world in the Splatoon 2 Global Testfire event. In addition to this free Splatoon 2 demo, Nintendo producer Hisashi Nogami also confirmed a new spectator view and LAN mode for the game.

In addition to the Testfire event, Nintendo squid expert and Splatoon 2 producer Hisashi Nogami also confirmed a new way for players to follow the action when the game launches later in the year – a mode that will give players a unique insight into squid behaviors and strategy called Private Battle Spectator View. This breakthrough in squid-observation technology will allow up to two non-players to participate in a Private Battle as camera operators to observe all the action from multiple angles*. Incredible! In addition to this, a new feature called LAN Play will be added to Splatoon 2, allowing up to 10 docked systems – eight players and two spectators – to connect via wired LAN. This feature allows players to create local Private Battle tournaments without the need for an internet connection. Local wireless play is perfect for your regular gaming get-togethers, but LAN Play is where it’s at when you want to organize a serious tournament event with your fellow players.

The Testfire Event will take place during a three-day event next month:

An exact release date for Splatoon 2 has to be determined, but the game will launch this summer. The Nintendo Switch will release globally on March 3.