The Spire is an upcoming Indie game which will use the ever so popular Unreal Engine although from the Pre-Alpha game footage I have determined that the game will be more or less like having Telekinesis Plasmid in a Bioshock game although since this is the pre alpha footage there could be additions of more powers later on. The game lets you use a Power Glove which gives you the command to push and pull objects.

Here is the game footage, While the game DOES look interesting I look forward on more details. Let's just hope the developers don't lose hope and give up on their project like the people working on Project: Black Mesa, which was supposed to be a Half Life 1 remake using the newer Source engine. Although the game has been in development for almost 2 years now there hasn't been a new update in a long time. I wish these guys the best of luck in their endeavors 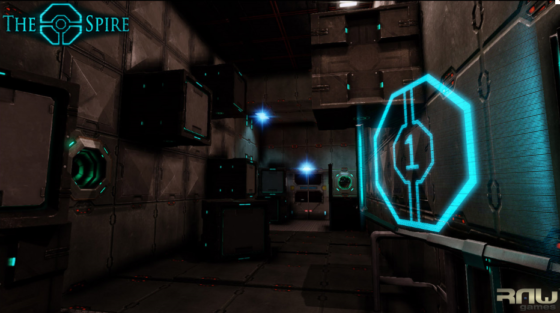 In the year 2029 In a world of turmoil, a global conspiracy is in motion that threatens the very future of mankind. The current world population has exceeded the critical threshold, fossil fuels are all but exhausted and the first public steps towards a one world government have been taken in an effort to stave the damage of this global catastrophe.

When David Samuel Maher awakes in a classified research facility, buried deep beneath the Antarctic surface, with no memory of his own, he must unearth his past but discovers that his future is entwined with the disturbing truth behind the conspiracy.

The Spire rewards ingenuity and presents both puzzle and environmental situations which can be resolved in numerous ways. With a revolutionary system is in place which gives you the ability to manipulate your surroundings in a real time physics environment; there are no pre-scripted answers, so adaptability is the key to success.
*
The ‘Tool’

At first it is not really clear if the device grafted to your forearm is a weapon, a tool or something else entirely. What is clear is that this physics manipulation device is essential to your survival and can be used to produce some very powerful results.
o
Violently push, pull, grab, pin and crush objects and enemies from afar.
o
Carefully move and rotate objects with perfect precision.
o
Acquire advanced powers such as Polarize to bring targets crashing together or send them flying apart.
o
Feel every impact with physics based, combo driven combat.
o
Use the environment around you to decimate your enemies and create powerful bonus combos.
*
Free flowing combat

Combine different Tool actions, attacks and abilities in order to survive against enemies and environmental hazards. Each successful move boosting power to the Tool. The complexity and limit of what can be achieved is only limited by your imagination.
*
Innovative ‘Workbench’ mechanic

Use the gesture controlled interaction system to construct objects, repair devices and interact with the world around you.