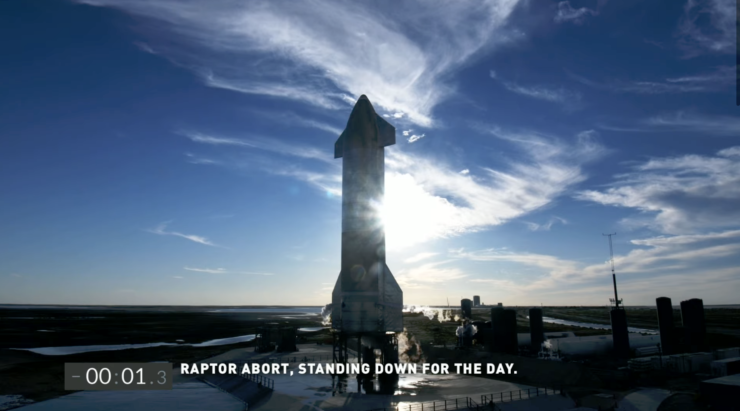 SpaceX's confirmation on its livestream of an abort as SN8's engines failed to ignite for liftoff. Image: SpaceX

As it makes a habit of launching crew and cargo to the International Space Station, Hawthorne, California-based astronautic launch equipment manufacturer Space Exploration Technologies Corp. (SpaceX) has aborted the first test flight of its next-generation Starship launch vehicle platform in South Texas. This platform is SpaceX's all-in-one approach towards catering to the space industry, as it is designed to not only potentially launch humans to Mars but also conduct other operations such as satellite deployments and missions to the lunar surface.

Today's flight was highly speculated about as SpaceX's fans and members of the press continued to wonder when the highly-awaited launch would take place. The test comes at a time when several quarters expect administrative changes within the U.S. government to increase focus on missions to Mars instead of those to the lunar surface as stipulated by NASA's multi-year Artemis program.

As SpaceX had cautioned before the launch, the objective of today's test was not to conduct a successful flight but to validate several of Starship's systems. The vehicle tested today is the upper stage of the launch platform (the SN8 prototype), with the lower (or first) stage being responsible for generating fifteen million pounds of thrust to enable the second stage to escape Earth's gravity. This upper stage will be responsible for taking crew and cargo to space and it might also be used for cleaning up orbital debris.

During the test, SpaceX gathered data for the vehicle's flaps, its engines and the propulsion system responsible for feeding fuel to the engines. The engine being used on Starship is completely different from the one that SpaceX uses on its Falcon 9 rocket lineup, and it is also the first of its kind designed and built inside the United States. The flaps that were part of today's test are key for the spacecraft maneuverability, especially as it relands on either Earth or on Mars - with SpaceX intending to use them to counter the aerodynamic forces that the vehicle will experience upon descent.

Additionally, SpaceX also tested the propulsion system's ability to switch fuel flow to the Starship's Raptor engines from the vehicle's main and secondary tanks. During takeoff, as it uses up the fuel in its primary tanks, Starship has to switch to its header tanks to power its engines to counter gravity for a smooth landing. 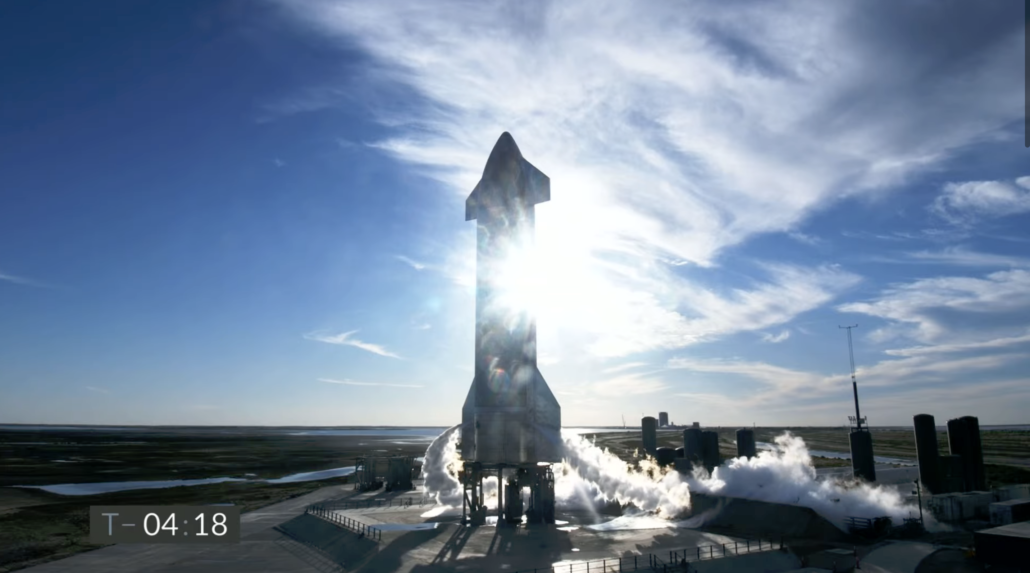 SpaceX's Starship SN8 prototype minutes before launch as it loads up super-chilled liquid Oxygen, with frost visible on the vehicle. This is the first vehicle that has been slated to be tested for a 12.5-kilometer flight, with three Raptor engines, a nosecone and forward flaps. Image: SpaceX

Roughly four minutes before the prototype was slated to take flight SpaceX's live feed for the event went live as Starship seemed to be ready for liftoff as propellant continued to load. However, just one second before liftoff, the vehicle's Raptor engines did not ignite to propel it to a height of 12.5 kilometers. SpaceX's Falcon 9 rockets go autonomous a minute before liftoff as the rocket checks itself to ensure all systems are ready for launch, and it's possible that this same system detected an anomaly that resulted in the Raptors not being ignited.

An abort at this stage is good for SpaceX as it saves the company time in the long run for Starship development. A failed test is likely to result in the destruction of the prototype that destroys the precious Raptor engines that take a considerable amount of time for manufacturing, with SpaceX's C.E.O. Elon Musk also highlighting this need in statements made earlier this year.

The test also comes as SpaceX continues to rack up testing time for the Raptor engine that powers. According to details revealed by the company yesterday, it has tested its engine in the form of ground tests on stands, static fires while mounted to Starship prototypes and in the form of low altitude flights for more than 16,000 seconds.

Interestingly, this crucial bit of information which is often used to lend confidence to a rocket engine's ability to withstand the stress of high energy gasses flowing through it, came soon after SpaceX's rival Blue Origin released footage of its BE-7 liquid hydrogen/oxygen engine's thrust chamber testing and stated that it had managed to test the engine's thrust chamber for 1,245 seconds.

The BE-7 is a different design than the Raptor and produces much lesser thrust than SpaceX's crown jewel. Blue Origin intends to significantly bring down the manufacturing costs of this engine by using non-traditional manufacturing methods, but owing to the company's tight-lipped nature, it's uncertain if it still plans to do so.

While highly-anticipated, today's test is only the first step in Starship's testing that should enable SpaceX to realize its objective of making humanity an interplanetary species. Testing of the first stage booster with its full complement of 28 engines will be an integral phase of the system's development as it will carry with the risk of losing the precious engines and the complications of making them and their propulsion systems in sync.

During comments made in Germany last week, Musk moved forward a crucial timeline for Starship's first flight to Mars. Musk, who had stated to the Mars Society in October that the first flight might take place in 2024, stated last week that he now believes that SpaceX should be able to conduct the flight in 2022, during the next Mars-Earth synchronization.