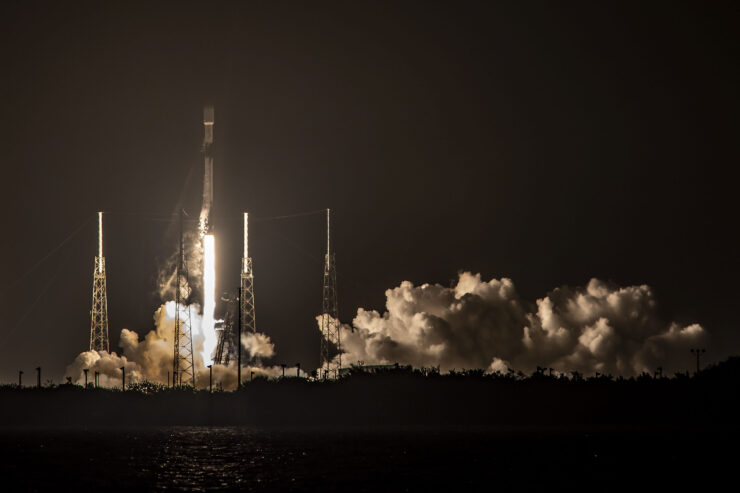 SpaceX's Falcon 9 Block 5 (B1049) took off from Space Launch Complex 40 (SLC-40) at Cape Canaveral Air Force Station in November with a batch of 60 Starlink satellites to mark for the service's 15th operational launch. Image: SpaceX/Twitter

Early last week SpaceX made a crucial concession to Amazon for the former's proposed modification to its Starlink constellation of internet satellites. SpaceX, which has requested the FCC to allow it to change several parameters of the constellation including satellite altitude, inclination and, earth station elevation angles is under sharp fire not only from Amazon but also from other companies. They have collectively raised concerns that the changes will cause significant interference with their networks and create safety risks.

To allay some of Amazon's concerns, SpaceX agreed to reduce the orbital tolerance of one of its five satellite clusters to +/- 10 kilometers in order to avoid sharing an orbit with the Kuiper constellation. After agreeing to the concession, SpaceX requested the FCC to let it deploy Starlink satellites this December in an orbit that would allow the company to bring satellite coverage to polar regions including Alaska.

In meetings held with a counsel to FCC Chairman Ajit Pai and the International Bureau's chief, Amazon's representatives denied SpaceX's conditional offer to reduce Starlink altitude once the Kuiper constellation in the 590-kilometer orbit was deployed.  Instead, they argued that the company should immediately reduce Starlink altitude and that the FCC should require SpaceX to adhere to this altitude for all future Starlink launches that are made under the proposed third modification which has become a thorny issue between the two.

Additionally, Amazon used SpaceX's concession to argue that the company has demonstrated that it can operate Starlink at a 580-kilometer altitude and provides support to its claim that this reduction is mandatory for future launches.

In its discussions, the satellite arm of the Seattle-based retail giant also takes aim at SpaceX's plea to the FCC for letting it launch satellites in polar orbit next month. Amazon hints that SpaceX's attempt to convince the FCC to authorize deployment in the entire cluster of 348 satellites, with groups of 58 satellites operating each of the six orbital planes at an inclination of 97.6° by demonstrating only a single launch opportunity is disingenuous.

It goes on to state that should the FCC allow this, the decision would be unprecedented in the Commission's history. The only option that would satisfy Amazon and let SpaceX launch the polar Starlink satellites would be a Special Temporary Authority (STA) conditioned on SpaceX not being able to demand protection for its satellites from other users of the polar shell and operate them in a manner that would not cause interference to the users. 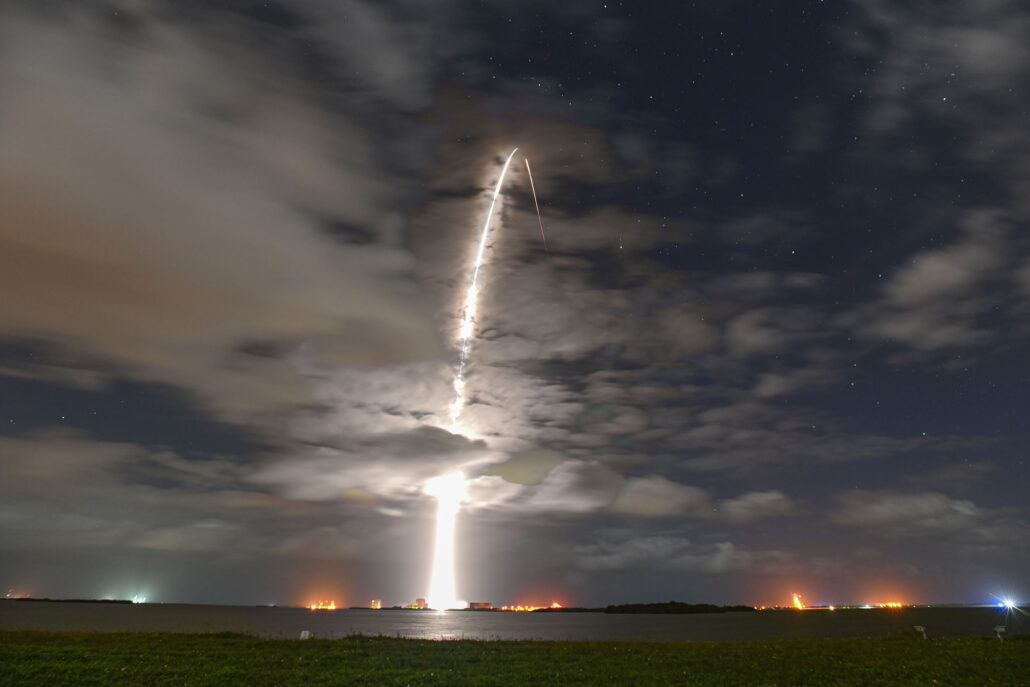 The post-launch arc of a rocket launch. This arc is from the Falcon 9 (B1049) that launched to deploy another batch of Starlink satellites yesterday. Image: SpaceX/Twitter

While Amazon's arguments cite only performance limitations on its systems resulting from SpaceX's modification changes, Viasat takes one step further in opposing the changes. It starts off by repeating earlier claims that SpaceX's Starlink failure rate exceeds the company's self-stated threshold of 1% (a figure that SpaceX had provided in 2017 before it had deployed any operational satellites), and therefore limits the company's ability to ensure that the satellites that do malfunction do not pose a threat to other companies' spacecraft.

However, the salient point of Viasat's opposition to SpaceX's modification, and particularly to the company's request that it's allowed to deploy the satellites in a polar orbit, is Viasat's claim that SpaceX is deliberately withholding information from the Commission. Specifically, Viasat believes that SpaceX is withholding future polar orbit launch opportunities from the FCC in order to push the Commission to grant a partial approval to the constellation modification that will enable a December launch.

Viasat then further boosts its argument by stating that since SpaceX had aimed to provide coverage to polar regions through deploying satellites in Very Low Earth Orbit (VLEO), it should choose to focus on these satellites instead of requesting the regulatory body to expedite the Starlink modification. In its application to the FCC that was granted in 2018, SpaceX sought authorization for 7,518 VLEO satellites, and stated in its application narrative that:

"..final 2,825 satellites of the LEO Constellation will complete this aspect of the overall system, further increasing available capacity and extending geographic coverage to polar and high-latitude regions [EMPHASIS ADDED] above 60 degrees North Latitude and below 60 degrees South Latitude." 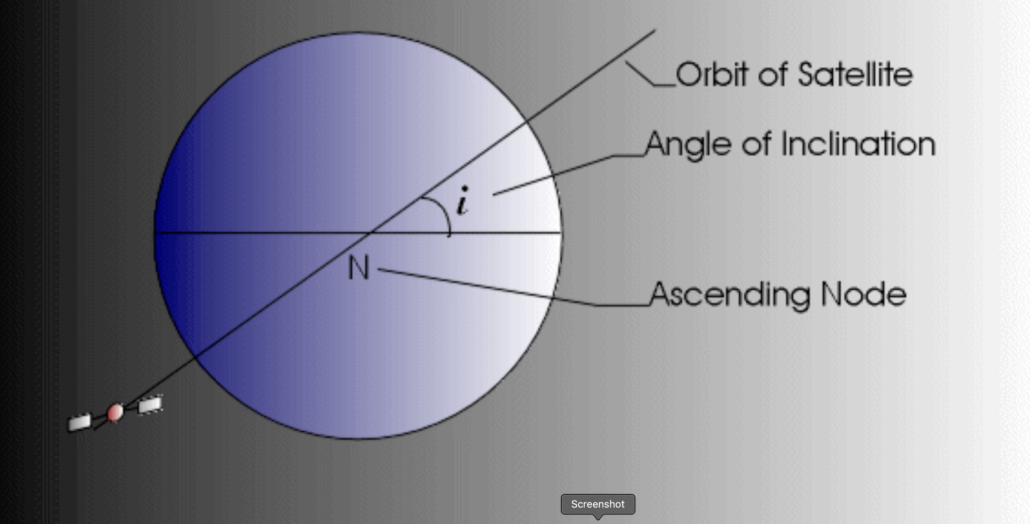 The inclination of a satellite courtesy of Rutgers University.

Viasat uses this to argue that since SpaceX has already been authorized to deploy these satellites, its request for a polar launch to serve Alaska and other regions, is unserved. However, what it fails to mention is that the final cluster of 2,825 VLEO satellites have an inclination of 48° for the first 347 satellites and an inclination of 42° for the remainder, while SpaceX's proposed orbital shell for a December launch has an inclination of 97.6° - making the latter better suited for providing polar coverage.

The inclination of a satellite is the angle that its orbit makes with the equator, with a 90° inclination marking a pure polar orbit that covers the North and South poles. Viasat also fails to observe that even prior to the proposed modification, the December shell had an inclination of 81° - the highest among SpaceX's five LEO Starlink clusters. So while the VLEO satellites are suited for providing coverage to Alaska, the ones subject to a proposed modification will provide better polar coverage overall - a fact that SpaceX highlighted in its commitment letter by stating that the modified shell would allow it to "support critical missions at polar latitudes" and "to the most remote areas of Alaska". 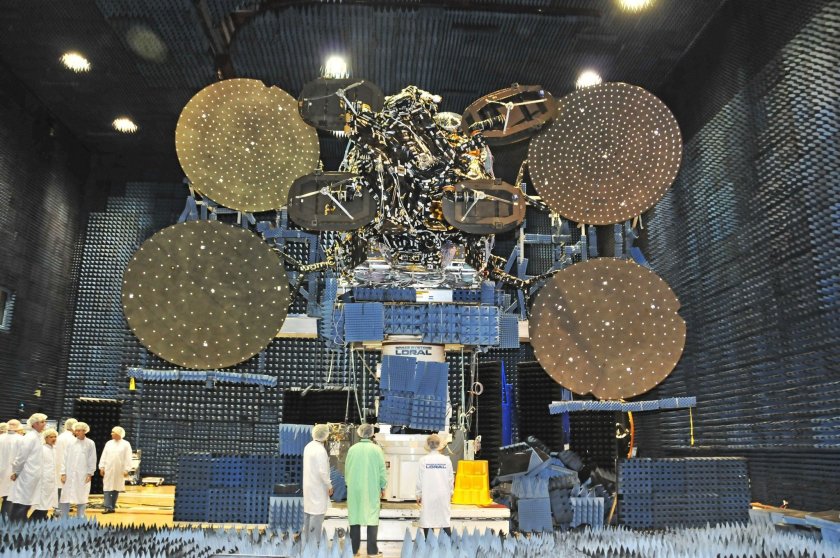 SES's agreement to a December Starlink polar launch mirrors Amazon's assertion that SpaceX is required to adhere to a non-interference condition that SpaceX agreed to in its commitment letter. It then proceeds to agree with Amazon that SpaceX's proposed changes do increase interference events, with SES citing interference with its O3b satellite constellation.

Amazon and SpaceX are head to head in a rulemaking proposal at the FCC which seeks to update the criteria for granting satellite system modifications. SES states that SpaceX's latest changes significantly change the operational characteristics of Starlink – a claim that Amazon has repeatedly made as well – and as a result, they should be allocated to a 2020 FCC processing round.

Doing so will avoid setting "...an unsustainable precedent, fundamentally undermining the NGSO processing round framework and destroying the certainty the Commission intended to promote," argues the operator, as it uses SpaceX's arguments against Amazon's Kuiper on SpaceX itself by stating that Starlink's proposed modifications too are "fully capable of succeeding as part of a later processing round".

Even as it fights a battle for Starlink's future within the halls of the FCC – a battle that will determine how well the service will deliver performance-wise (including a latency gain that Viasat describes as "undetectable") - SpaceX continues to launch more satellites into orbit. The next couple of launches will ensure that the number of deployed satellites crosses 1,000 - marking less than one-tenth of the total satellites that the company hopes to deploy and operate and providing it with a significant headstart over competitors.