[Editorial] Something very interesting was given to me recently. A slide from a PS4 presentation which showed the total bandwidth of the PS4 GPU. The Bandwidth in question is claimed by most PR documents to be around 176GB/s as most of you know, but it turns out that the actual bandwidth is somewhere around 140GB/s and drops even more when heavy CPU utilization occurs. While the latter isn't particularly shocking, the same can't be said for the actual bandwidth limit. Before I begin, let me state that I have dropped Sony PR an email and will update this editorial as soon as I get a response. 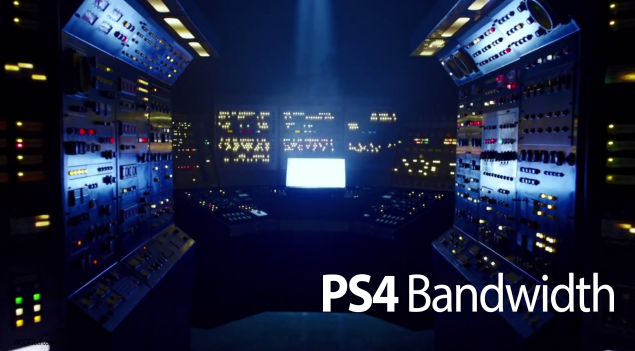 The slide comes from a technical presentation of the Sony PS4 system and as such, it must be treated with the utmost caution. However, from what I can see, if there is one thing you cannot deny, its  that the effective/usable/actual (whatever you want to call it) bandwidth available to the Pitcairn GPU of the PS4 is 120GB/s to 140GB/s. By this I mean the actual bandwidth available to the developers to play with. The problem is, this is something that cant really happen. Not unless the memory clock we know is incorrect too. Confused? let me explain. The bandwidth and the effective memory clock are linked. this is how the equation goes. Lets assume a memory clock 5500 Mhz and a bus of 256Bits. This is how the equation will go [5500 Mhz * 256 Bits =  1408000] then [1408000/(8*1000) = 176]. As you can see, a memory clock of 5.5Ghz and 256 bit bus has to result in 176 GB/s bandwidth. Unless, one of the other variables are incorrect, or the basic premise is flawed. 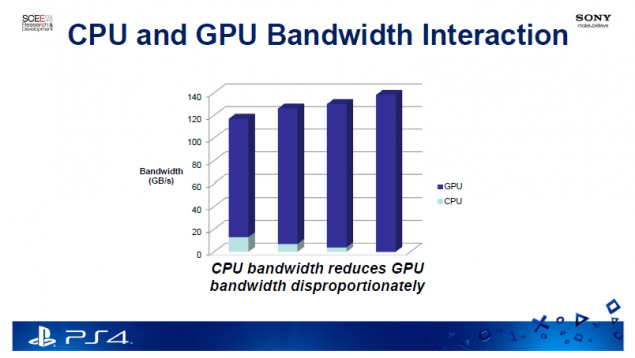 So option 1 that we have is that the graph is incorrect or skewed due to an unknown factor, however because there are actually 4 samples present, I am don't think that's the case. The second option is that the memory clock is wrong and the last option being the Bus being wrong. Now needless to say, the bus being wrong is quite improbable. Reversing the previously used equation we get [(140x1000x8)/256 = 4375Mhz] and [(120x1000x8)/256 = 3750Mhz]. This is now beginning to make some semblance of logic. The memory appears to be down clocking as the CPU usage increases and this is where the ''disproportionate'' part comes into play. Theoretically as the APU varies between CPU intensive and GPU intensive tasks the bandwidth should remain the same, 140 in this case. But it doesn't. The total bandwidth of the system actually drops to as much as 120 GB/s and more if the trend continues. If you take a look at the graph you will notice that the CPU bandwidth is actually null in the bar where the GPU bandwidth is highest. Since this is a realistic impossibility, even with very low usage you are looking at about 135GB/s of Bandwidth at max. This is a very interesting development and is probably the result of the fact that at the heart of the PS4 is an APU.